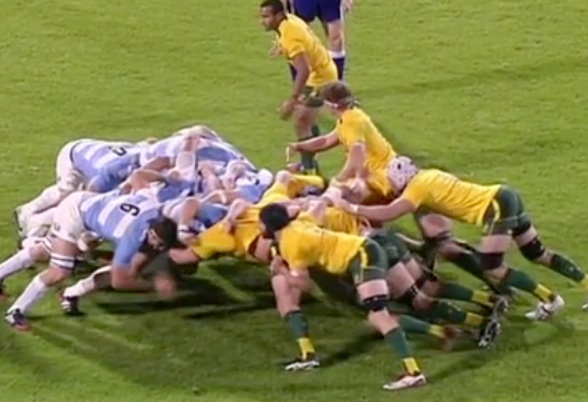 What a great performance!

For the first time in the Rugby Championship, doing the ratings is a pleasant task. And aren’t you all lucky that it is me, the most level-headed of the G&GR contributors, that has been assigned the task. No controversial ratings this week, my friends. After this article you will probably require physio on your sore necks, such will be the level of fatigue you will generate from all that nodding in agreement.

I thought it was a very good Wallaby performance, against top-tier opposition on hostile soil. Yeah the Argie defence was a bit soft, but still our execution was the best it has been in a looooong time. Thus I have been generous, as I thought almost every player had moments to be proud of.

Sadly we start on a negative note. Not only did Slipper have a poor game at the set piece, he was also pretty invisible around the park. However the stats tell me he made plenty of tackles, so maybe I missed him. But ultimately he was outshone by Benn Robinson for the second week running. 4

A classic Moore performace – flawless at the lineout, getting through plenty of work in the tight. Did nothing flashy, but he never needed to. Was given a deserved early rest, though he loses a point for the below-par scrum. 6

Once again was more noted for poor play than good – penalised at scrum time, then missed a soft tackle on a charging Argie backrower. But the Argies are a tough assignment, and he never shirked the task. We still need more from our TH though, and his stats aren’t great. 4

Not his best effort. Only a couple of runs, and missed a few tackles. Very hot and cold this series, one wonders if the strain of poor team performances is starting to take its toll. 5

Was playing OK, then was given a yellow card for an act that was dumb, dumb, dumb. Surely there are better options around as he just doesn’t offer enough at present. 4

Another big effort. Got through a mountain of work, and has a wonderful knack of being in the right place at the right time. The find of the Rugby Championship. 8

Such a solid player. Makes tackles, wins rucks, and carries the ball like a champion. Was part of a dominant back row effort. 7

His best game in gold for mine. The first time he has really looked like an international No. 8, with a big workload and good impact with the ball in hand. A much more constructive way to achieve your ARU top-up! 8

Back to his best. He ensured we had quick, front-foot ball from every ruck, and kept the defence on the back foot with his re-energised running game. The most influential player in the game for mine, so he gets the award for G&GR Man of the Match. 9

Looked as comfortable as I have ever seen him as Wallaby No. 10. His passing game was back, and his option-taking was much improved. Made a few errors, but at least they were made in the course of playing fast, attacking rugby. Not sure if it is his best Wallaby performance, but it was pretty good. 8

Where did that come from? This bloke played like a man possessed, and came an inch away from getting MotM. Played like Digby, except he actually passed the ball a few times. Let’s hope it continues. 8

Another game he struggled to get into. Was subbed at half time, and I can’t say I noticed the difference.  5

He is starting to look like the real deal. Still prone to forcing the last pass and rushing up in defense, but his physicality in midfield is very pleasing to see, and he played a valuable role in this victory. 7

Played his part expertly, as he always does. Never lets the side down. Missed a few tackles, but they were not costly. 6

Made mincemeat of the Argie defence. He makes it look so easy, sometimes you think he isn’t even trying. One misread in defence was poor, but other than that it was yet another star performance. 8

Came on for Moore and made a real impact. His defence was brutal, and his lineout throwing was solid. One of his best Wallaby efforts. 7

Came on for Slipper when he was carded, and again at the 60th minute. Made a big difference at the scrum, took a couple of pilfers and scored a good try. He needs to start now. 7

Came on for Alexander and played the last 30. Struggled for impact around the field, but the scrum was more steady while he was out there. Not sure how much of that was his doing, though. 5

Came on for Horwill, and played the last 20. Didn’t make much impact. 5

Played the second half. Did OK in an unfamiliar role. Defence was good, not many opportunities with ball in hand. 6

Looked good in the 15 minutes he was on. Threw a lovely cut-out pass with his first touch, and scored a good try with his last. 6

Dwyer’s view: quite the turnaround
The Monday post mortem: Eight observations from the Test against Argentina.