Analysis: How the Reds can beat the Stormers

Analysis: How the Reds can beat the Stormers

The top placed Aussie teams – the Brumbies and Reds – face two fearsome opponents in the top placed South African teams – the Bulls and Stormers – this weekend. The form of our conference would say that they’re up against it – so how can they pull off two upsets? Can the stats from previous games lost give us a clue as to their Saffa opponents’ weaknesses?

In this article, I’m going to look at the Reds vs Stormers, due to play Friday night.

The key to this victory is clear in our memory, as the Stormers’ only loss this year came last weekend at the hands of the Crusaders. Smugly, I got this tip right. My reasoning was that  – as previously discussed here – the Stormers are territory freaks. They want to pin you in your half and pressure you into mistakes with their clinical defence, discipline at the tackle and line out strength. 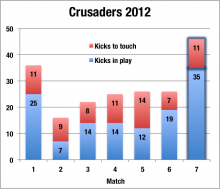 If you can take that from them by putting them back in their half, and making them play their way out, you’ve turned the tables. Surely if any fly half in the world has the game controlling skills to do this, it’s Dan Carter.

And so he did.

What we saw last weekend was an 80 minute tactical kicking duel, which the Stormers lives depended on. Leading up to the game, the Crusaders and Stormers were averaging 25 and 28 kicks per game respectively. On Saturday they made 46 and 47 tactical kicks! 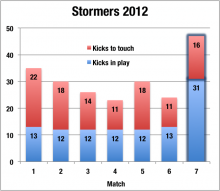 As you would expect, within a duel, a lot of these extra kicks will be in the field of play as the two teams jostle for position – as illustrated in the graphs to the right. The decider though, was who ended up giving away line-outs in their own half. And by this measure, the Stormers were clearly the loser. They only managed to pressure the Crusaders into giving them 5 attacking line outs in the Crusaders half of the field, whereas the Stormers gave away 10 in their half.

This then put the Crusaders with the most potent attacking set piece – the line out – in the right end of the field. Through this pressure they forced the Stormers to give away 10 penalties, 8 of which were while in defence.

Eight of these penalties were also the Stormers side of halfway, resulting in the Crusaders having their highest rate of shot for penalty goal so far in the tournament – 80%. All of which were converted, netting 24 of the Saders 31 points and matching the Stormers total with penalties alone.

It should be said that even with the success of this extreme game plan – which relied heavily on them conceding only 3 penalties in their half – this Stormers outfit still managed to run the game close, scoring two tries to one.

They did it last year in Cape Town using exactly this game plan and winning 19-6. Interestingly, only one other team has kicked more than 40 times in a match this season – the Reds 46 times against the Brumbies last weekend!