Who Should Be The Wallabies Number 13? 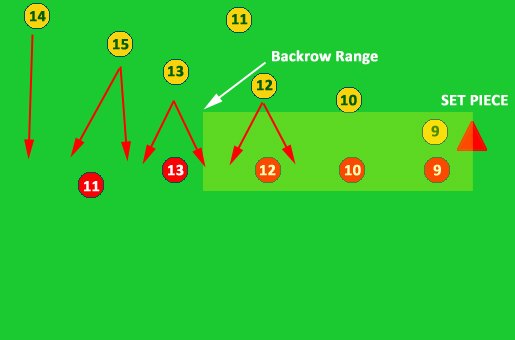 Who Should Be The Wallabies Number 13?

Sully (@Only1Sully) wanted me to look at how teams attack using their number 13 and who should be the Wallabies number 13.

The role of a number 13 or outside centre has changed over time and today there a number of different ways they are used dependant on the overall attack strategy of a team. Later I’ll discuss the tactical choices a team has to make and the ramifications that has for the type of player you’d choose to play number 13 but I’ll start by looking at how teams use their number 13 in attack.

How a number 13 is used is largely dependent on the space available to attack in. Particularly on first phase attack from set pieces the space is determined by the ‘backrow range’, which is the width across the field the backrow can reach before the ball can be advanced across the gain line. Obviously if you can attack beyond the backrow range you’ll have less defenders to deal with, which will make it easier to achieve a line break.

As a result of this limited backrow range plays were designed targeting the space outside number 13 who is normally the ‘defensive end’ with the winger hanging back a little to help defend a kick. The attacking number 13 necessarily had to be good at catching and passing the ball quickly to feed the outside players and was almost a third playmaker. The structure the Wallabies used involved a very narrow spacing of 10, 12 and 13 leaving around half the width of the field for wingers and fullbacks to attack in. Of course when the defence started to drift wider to counter these wide plays, space would open up through the mid-field as shown in the first video below.

As the backrow range increased the space outside number 13 reduced and teams started adopting an alternative strategy which involved spreading 10, 12 and 13 out and targeting the increased space between defenders. This strategy also took advantage of the introduction of synthetic balls which aided the ability to throw longer spin passes.

As defences have improved with the introduction of rugby league defence systems teams have started using more decoy runners and passing behind them to confuse defenders and increase the space between defenders to strike into. These sort of decoy plays are not only used on first phase plays and they make it even harder to defend at number 13 as many decoy plays are designed to confuse the number 12 and then leave the number 13 facing two runners without help from inside.

Part 1 of the video shows examples of these different alignments and decoy runners.

Regardless of improved defences and backrow range there is still more space available either side of the defending number 13 than just about anywhere on the rugby field, particularly from a lineout or a scrum within 15 metres of either touchline. The risk if you move the ball that wide on the field is that your own backrow cannot assist to retain the ball at the breakdown if the strike fails and the ball carrier is tackled.

So the first tactical choice a team has to make regarding its attack is whether to attempt to use its backline to attack outside the backrow range on first phase. This choice affects how the team will attack on subsequent phases and also the type of player that is required at number 13.

If a team chooses to keep the ball within their own backrow’s range they’ll usually use tactics such as having number 12 or 13 punch the ball up in mid-field within the backrow range. If the number 13 is used in this role they normally angle back in-field so they strike closer to the support of their own backrow. The aim with this tactic is to get the ball over the gain line on first phase without necessarily having to break the defensive line. If the resulting breakdown is beyond the gain line the defending backrow will have to run across field and backwards which sets up an opportunity to advance the ball further on the second phase.

The other tactic a team choosing to keep the ball within their own backrow’s range uses is to have a high percentage of short lineouts when they are attacking which removes much of the precious space around the defending number 13 because forwards are released from the lineout into mid-field. Again the aim on first phase using this tactic is to get beyond the gain line, not to necessarily break the defensive line.

Choosing to keep the ball within their own backrow’s range is a conservative tactic based on a desire to maintain possession and wear the defence down until the defensive line falters or a penalty is received when the defensive team infringes at the breakdown. It means that a team will run limited first phase backs moves.

If you want examples of these tactics in use watch any recent Wallaby match. You’ll see that even when the Wallabies use a first phase backs move the strike is targeted inside the defending number 13. This ensures that even if the strike is unsuccessful the ensuing breakdown is not outside the backrow range.

If a team chooses to use these sorts of tactics it impacts on the type of players selected in the backline. There is little point in choosing an expansive number 10 with a superb long pass if you want to play predominantly within the backrow range. As I’ve said before if the Wallabies are going to use these tactics they should select Berrick Barnes at number 10.

A narrow attack is also best suited to a number 12 and number 13 who are strong ball runners who run straight and hard. Their role is primarily to get over the gain line – there is little requirement or opportunity to use footwork to target space or the requirement to pass the ball.

Many wingers who move in to play number 13 are well suited to the role of ‘crashing’ the ball forward. The Wallabies used Digby Ioane at number 13 on the 2009 end of year tour and despite usually being one of the Wallabies more dynamic runners he was largely restricted to a ‘crash’ ball role and was largely ineffective. I’ve seen many people suggest Nick Cummins is the ideal candidate to play number 13 for the Wallabies and if using the narrow attack tactic that idea has merit. When he’s played number 13 for the Force the Honeybadger has predominantly been used in this ‘crash’ ball role or as a decoy runner and he’s had limited impact. I think both of those players are best suited to be wingers where they will have much more impact.

There are differing views on the type of player a team should use at number 12 and 13. New Zealand use their bigger player at number 12 (Nonu or Williams) and their more agile player at number 13 (Smith) as do Ireland with O’Driscoll at number 13 and Wales with Roberts at 12 and Davies at 13 (although in 2009 Wales started with these positions reversed). England use Tuilagi at number 13 and in the past the Wallabies used a similar setup with Horan and Giteau at 12 and Herbert and Mortlock at 13. Of course Horan was a pretty strong ball runner in his own right!

If a team is prepared to attack outside the backrow range the role of number 12 and 13 are vastly different. Number 12 has to be a second playmaker to help create opportunities for the wider players. There is still a place for a ‘crash’ ball at number 13 occasionally so the number 13 must be a strong runner but the key requirement is that the player has excellent footwork to move into the space around the defending number 13. If the number 10 has a good long pass the direct pass to number 13, cutting out number 12, can still open up most international defences but number 13 must be able to make subtle late changes of direction to run into those holes.

I rate Brian O’Driscoll at the best number 13 for a long time in world rugby due to his exceptional footwork which allows him to utilise the space around the defending number 13. Stirling Mortlock was a great number 13 for the Wallabies with Stephen Larkham throwing the cut out pass directly to him. Mortlock was a winger who converted to the number 13 role and I expect many people will remember him as a ‘crash’ ball runner but if you watch him closely he was actually very good at using a subtle change of direction to get into space. The best thing about Mortlock was he had the ability to either get into space or to ‘crash’ the ball over the gain line. James O’Connor may eventually find that number 13 is his best position because he could use his footwork to real advantage in that position, although I wouldn’t see him as a ‘crash’ ball option. Rob Horne is a straight runner who hasn’t shown the necessary footwork at international level and I remain unconvinced he’s the answer for the Wallabies at number 13.

For me there is only one player that meets all the requirements I’ve outlined for number 13 and that’s Adam Ashley-Cooper. He has shown time and time again that he knows how to break a defensive line. He’s a very strong runner and in a ‘crash’ ball role can get over the gain line as well, if not better, than all of the other candidates but he has the footwork that the others don’t. Quade Cooper has the vision and the pass to take advantage of the space between defenders and Ashley-Cooper uses his footwork to change direction into the space and meet Cooper’s pass.

The one criticism I see people level at Ashley-Cooper is that on too many occasions he fails to pass the ball when other players are in a better position than he is. That criticism is valid and is something the coaches must work on but having watched every match again in which he’s played number 13 for the Wallabies in preparing this article the issue is nowhere near as bad as some people make out. It’s also not an issue that only he suffers from – I’m amazed at how many of the Wallaby backs miss opportunities outside them and either keep the ball themselves or kick it away.

If either O’Connor or Ashley-Cooper were not available I’d go with Christian Lealiifano at number 12 and Ben Tapaui at number 13 with Tapaui as third choice number 12. Ben Tapaui is a good player and has the footwork I think a number 13 needs but I have a preference for a genuine playmaker at number 12.

If the Wallabies are going to stick with their conservative attack plan, I see no reason not to leave BenTapaui at number 12 and Adam Ashley-Cooper at number 13.

I’ve included some footage on these topics in part 2 of the video below.

3rd Tier curtain raiser for REBvTAH in Hobart
How Many Lineout Jumpers Do The Wallabies Need?