What will the Wallaby front row look like for the June tests?

What will the Wallaby front row look like for the June tests?

With the June Test around the corner we thought it was time to look at the contenders for wallaby spots in each game. We have Tests against Scotland on Tuesday the 5th and Wales on the 3 following Saturdays. The make up of the first test side will be strongly influenced by the Super Rugby schedule with the Reds and the Force both having byes on the weekend before the match. Further complicating things is the need to field a competitive side 4 days later for the Welsh test.

Firstly lets look at the contenders for the positions.

That’s a pretty big list! But not all of these players will be in the mix for a spot in the tests for various reasons. A test prop needs a good range of skills across all the front row disciplines and also needs to contribute around the field. Some of the guys above are not up there on one or more of the essentials.

James Slipper, Tatafu Polota-Nau and Salesi Ma’afu started the last test match against Wales on 3 December 2011. Of these three only Slipper has the weekend before the first test off, but he is also a possibility for the game day squad on Saturday against Wales.
Let’s look at how the candidates are going.

I’m going to pick my front row for the Scottish test by ignoring the players I think will line up against Wales. So Benn Robinson, Sekope Kepu, Tatafu Polota-Nau and Stephen Moore Will sit out this game. Robinson and Kepu are still our best props and as long as Deans leaves Kepu on the tight head side he will do fine. The third props spot is between James Slipper and Ben Alexander. I think Alexander will get the nod here. He is playing a tighter game this year and I think his work rate is hard to ignore and the temptation of playing Slipper against the Scots will prove too strong to resist.

Which means Slipper is my first prop for the Scots. I think Dan Palmer is a chance for the second spot. The Brumbies have a Friday night game and the Aussie coaches will be keen to see how he goes. I’m picking a dark horse for the third propping spot. I think they will go for an old head for this spot. Someone who just gets the job done. So I’m saying Greg Holmes fits that description nicely. 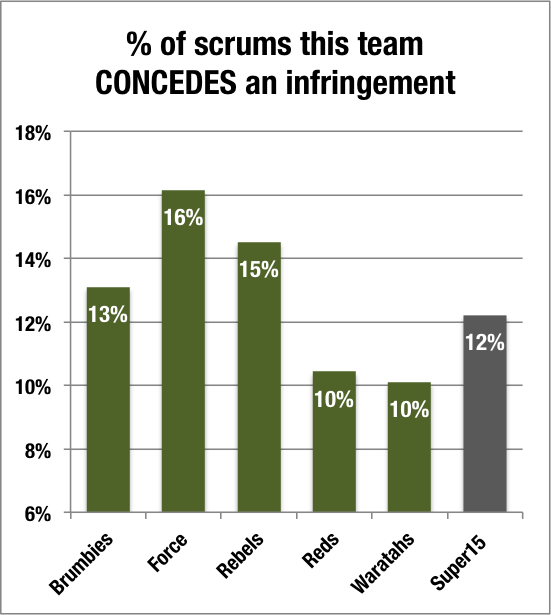 Scrums - Who's got it and who hasn't

James Hanson and Nathan Charles are both great young hookers and this is a good chance to see how they look at the next level. I think at least one will feature in the Scottish test along with Saia Faingaa who has returned from injury with a bang.. As for the Welsh test I think Stephen Moore will start and Tatafu Polota-Nau will be on the Bench.

So there you have it.  I think it couldn’t be clearer. I believe it’s entirely possible for Australia to field 2 completely unique front rows for the first 2 tests and still be very competitive. In fact if you look at the players running around Super Rugby this year it’s hard to think of a time where our front row stocks have been better. So have I forgotten someone? Let me know where you think I’ve got it wrong. But I’m right I know I am!