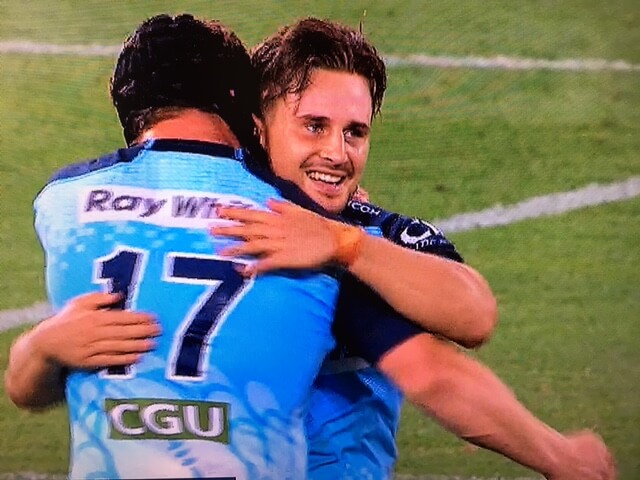 The NSW Waratahs travelled to Melbourne to redeem their lacklustre 1-3 start to the 2017 season while the Rebels looked to get their first win.

This was a must-win for both teams. The Melbourne Rebels had a (to put it bluntly) horror start to their season, coming into round 5, with no wins from 3 games. Meanwhile, the Waratahs had managed only one win from 4 games and with a tough road ahead, this was a game to get their show back on the road.

The dial was turned up “all the way to 11” and stayed there for the entire game. The Waratah took early territory and spent much of the first quarter of the game camped out in the Rebels 22. Defences held strong, though with early scoring going to the Rebels first with a penalty kick from Reece Hodge in the 4th minute, and then to the Waratahs in the 11th minute with three points via Bernard Foley’s boot, making a welcome return to the Tahs.

The first try of the game went to Reece Hodge, after he sliced through the Waratah’s defences to score near the posts in the 18th minute, subsequently converting his own try, taking the score to 10-3.

After trading penalties each in the 25th (Rebels) and 30th (Waratahs) minutes a splendid run from Amanaki Mafi and pass to Jack Debreczeni ended with Tom English finding the try line and another conversion to Hodge, putting the Melbourne boys further in front.

Reece Hodge bagged his second try in the 36th minute, the last time the Rebels would score after Hodge’s conversion attempt was charged down by the Tahs’ Reece Robinson. A penalty attempt just before half-time was also missed by Hodge and soon after both teams hit the change rooms with the score 25-10 – the Rebels best-ever first half lead. Come the second half; things would change dramatically…

It remains a mystery what was said in the sheds during the break, but the Waratahs came out with a whole new attitude. The Rebels suffered a swag of injuries during the first half, with Culum Retallick, Chibba Hanson and Dominic Day (who must break some record for the shortest ever Super Rugby debut at 30 seconds), coming off with various injuries, mainly blows to their noggins.

While the Rebels still had a 19-point score advantage a very kickable penalty was passed over in favour of a kick to touch and line out, which all came up nought. Without Hanson in the second half, the Rebels already shaky line out fell to pieces.

Ned Hanigan got the Tahs’ comeback on the road with a try in the corner in the 49th minute, bouncing off Marika Koroibete in the process. Foley’s steady boot added the 2 points. Reece Robinson dotted down in the corner 8 minutes later, but Foley was unable to convert, taking the score to 25-18 in favour of the home team.

Injuries started to bite the Rebels, with Sefa Naivalu looking like he dislocated his shoulder but played on due to a depleted Rebels bench. Tom English had just earlier been subbed for Mitch Inman as he’d picked up a leg injury.

In the 77th minute, after sustained pressure in the Rebels’ red zone, Colby Fainga’a was pinged for a ruck infringement, bringing the Rebels down to only 14 men after multiple injuries left them short. The Waratahs quickly took advantage of this, sending replacement Michael Wells over the try line with Foley’s successful conversion levelling the scores 25-all with only 2 minutes to play.

The Rebels had led the game all night, but it is at the final siren where it counts, and this is where the Tahs drove the final nail in. With only 37 seconds left to go, David Horwitz, barely marked, strode over with the match-winner and heart breaker. Foley added the final 2 points, leaving the Rebels scoreless in the second half and only a losing bonus point for their efforts.

Reece Robinson scores in the corner as the Waratah fight back

The Rebels will rue a massive lost opportunity. They built a 19-point advantage at the break and could not hold onto it. Credit to the Waratahs for not panicking and sticking to their game plan. The Rebels were not helped by numerous injuries (and some might add questionable penalties), but that, as the man (or woman) once said, “that’s Rugby”. You have to play the full 80, not build a lead and they just try to hang on.

For someone not emotionally invested in this match (i.e. not a Rebels supporter), this was a great advertisement for local derbies. It had everything – it was fast-paced, high-scoring and included a last-minute match-winning try. “Dour” is not a word that can be attached to this match and is a compelling argument for not only keeping 5 Australian teams but also changing the Super Rugby format to include more local derbies.

The Rebels next travel to Dunedin in round 6 to play the Highlanders, while the Waratahs take on competition leaders the Crusaders at home in Sydney.

The simple answer to this is “the second half”, but you could go back in the 37th minute when Reece Hodge’s conversion attempt was charged down by Reece Robinson (Reece v Reece). From that moment on the Rebels failed to add points and the tide had started to turn in the Tahs’ favour.

Although carded in the 77th minute, Colby Fainga’a in a losing team was immense all game, like he was the previous week against the Chiefs. If more Rebels adopted his “never say die” attitude the result may have been different. For the Waratahs, the steadying influence of Bernard Foley was a welcome return and was a factor in the second half comeback. For scoring 20 of his team’s points (including two tries in the first half), though and a much-improved kicking success rate, Reece Hodge gets my nod for GAGR Man of the Match.

For the visitors, Jake Gordon is not only putting his hand up for more Super Rugby run-ons, his form thus far is pointing towards a possible future in the green and gold. While for the Rebels, Colby Fainga’a has really stepped up this year and while back row stocks for the Wallabies are fuller than most, Fainga’a could find himself in the Wallabies frame if he continues to impress week-in, week-out.