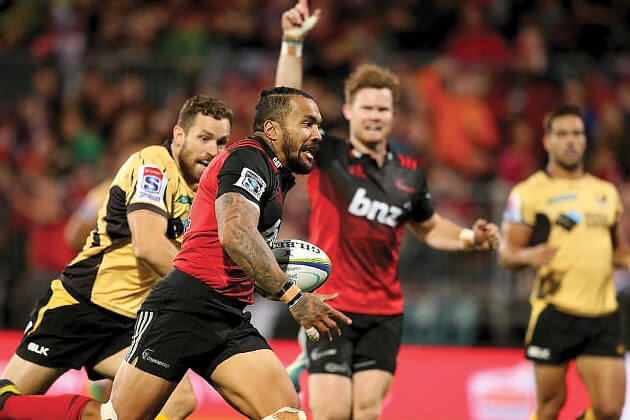 A first half blitz from the Crusaders and a strong finish, has seen them come away with a big win against an undermanned Western Force team in Christchurch.

They scored four tries in the first half but the visitors never gave up and scored two themselves. In a messy second half the Crusaders increased their lead and for once did not have to rely on a comeback.

Matt Philip passes off the ground with Sam Whitelock in attendance

The Crusaders started the match in fine form making metres at will. When scrumhalf Drummond hared off from a ruck which had no defensive pillars, 40 metres out, he dished the ball out to former Wallaby star Ioane to score. Only three minutes had passed but the Crusaders had already racked up 16 phases.

After a Force penalty goal the Crusaders had the visitors under all kinds of pressure with their positive play, and eventually flanker Todd grounded the ball against the goal post padding. The Kiwis were deservedly ahead 14-3 after just 16 minutes and it looked like an avalanche was going to happen.

The home team looked a lot sharper; their ruck ball was so quick that the Force had trouble realigning behind the offside line, and before they were, the Crusaders would take off again.

However the Force showed true grit. When centre Brache pressured the ball carrier, winger Newsome, in his debut starting game, intercepted his too-late pass, and ran the ball in 60 metres to score under the crossbar. Crusaders 14-10 – the Force were still in the match.

But after the kick-off the Crusaders turned Force ball over and soon new All Black Barrett scored from a well-taken maul. With a quarter of the game gone the Crusaders led 21-10 and they hadn’t kicked the ball in open play yet.

Then came a contentious decision from Australian referee Rohan Hoffman when he awarded a try in the 26th minute to Crusaders’ prop Romano. Force winger Peni was tackled on his own try-line and and it appeared that Force prop Ainsley had his hands on the ball when it was on the ground in-goal – that he had grounded it, by definition.

But Hoffman ruled that the ball was out and had not been grounded, hence Romano was within his rights to come around the back of the ruck to steal the ball and score. The TMO did not have the evidence to overrule Hoffman.

The Force would have been disappointed with the call but they kept their heads up. In their best period of the half they attacked for last eight minutes with lineout mauls and dominant scrums, and were rewarded just before half time with winger Peni scoring off a nice pass from from flyhalf Lance.

Whilst the first half was an entertaining display of rugby the second half was not. The rain set in and the attacking rugby dried up, being replaced by scrums, penalties and yellow cards.

Soon after the break hooker Taylor scored from a lineout drive for the Crusaders and later fullback Morahan was denied a try for the Force by a cruel bounce.

Then started the unlovely scrum-athon and three consecutive scrum penalties against the Crusaders. Hoffman finally sent Crusaders’ prop Perry to the bin, but the Force were unable to capitalise and didn’t add to their first half total.

It was no disgrace for the Force to be down 17-33 near the end, having surrendered just five points in the half, but as usual the Crusaders finished strongly and scored two tries, to Havili and Funnell, in the last eight minutes.

Despite that finishing flourish, and their first bonus point of the season, the Crusaders would not have been happy with their second half performance. But winners are grinners and since the Chiefs have a bye, they go to the top of the NZ Conference.

The Force would feel they were in with a chance at half time but a lack of experience and composure after the break let them down as it has on numerous occasions in the past. Coach Dave Wessells will have to address this if they are to be any hope next week against the Blues.

As mentioned, the try by Romano was controversial.   If just grounding the ball in one’s own in-goal was needed to save a try being scored, with no downward pressure required, the Force seemed to satisfy that condition. The Force needed everything to go their way at 10-28 down at the time and this was a huge set-back.

Even ignoring that bizarre try Luke Romano was massive and he is the G&GR man-of-the-match.  He and Whitelock had the wood over the inexperienced second-row pairing of Haylett-Petty and Philip. The experiment of playing Scott Barrett at blindside flanker was a notable success for the home team.

It was another strong game from scrumhalf Louwrens, and Newsome was impressive in his run on debut. Father Time has not yet caught up with flanker Hodgson, as the former captain put in a fine shift in the second half, and hooker Polota-Nau had a bruising debut start for the Force.