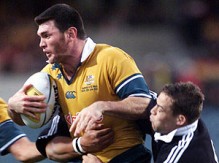 Each week we here at G&GR select our Wallaby Team of the Week. Rather obviously, this is the best performed Australian players of the previous weekend’s Super 14 Rugby. What we’ve found is that there is yet to be a player to rise up to the challenge and stake a claim for the outside centre jersey with a consistent set of dominant performances. One problem for the selectors (both our amateur ones and the Wallabies’ professional ones) is that at least two of the leading candidates have spent limited game time at outside centre.

It is such a crucial position for the Wallabies, and one in which we have prided ourselves over the last few decades. From Andrew Slack’s composed play and leadership to the natural athletic prowess of Jason Little to the more direct and uncompromising play of Daniel Herbert to the powerful running and big game plays of Stirling Morltock. Despite the occasional Nigel Kassulke, Dominic Maquire and Matt Rogers appearance and it is an impressive legacy. So who will answer the call in 2010 onwards? Who will continue the chain of command for next year’s Rugby World Cup and beyond? Let’s take a look at some of the options and consider their merits.

The Incumbent: When Digby Ioane was thrown into the 13 jersey for the Reds last year, some questioned whether he had the all round skills to play the position. He proved his critics wrong on the field with an awesome Super 14 competition, and played three of the five tests on the end of year tour in the position (with Ryan Cross playing the other two). In 2010 new Reds coach started the season with Digby on the wing, outside Morgan Turinui, before moving him in one spot for games against the Force and Cheetahs. His form has been consistent throughout, but it will be up to Wallaby coach Robbie Deans as to whether he’s seen enough of him in that important outside centre channel to select him there again in 2010.

Leading Candidates: The other man that shared the 13 jersey with Ioane on last year’s tour of Asia and the UK was Ryan Cross, of the Force. Since switching across to rugby from league in 2007, it would be fair to suggest that Cross has been the most consistent of the code converts. It has helped that he has spent most of his time in the one position, outside centre, and his direct running and solid defence has been an important asset in the Western Force’s armoury.

The man who was the first choice option for the position for last year, injury permitting (and in fact since 2003) is that man Stirling Mortlock. As mentioned above, Australia has produced some mighty impressive outside centres of late and Mortlock is arguably the best of the lot. Now entering his supposed ‘twilight’ years, despite just signing a three year contract with the Melbourne Rebels, Mortlock can still play in important role in the Wallabies World Cup hopes next year. Injuries are his bugbear at the moment, and it will be the management of those, hopefully flowing onto improved form on the field that will impact his future Wallaby chances the most.

Whilst Cross and Mortlock have been spending plenty of time in the 13 jersey this year, another of the leading candidates has not. Although many experts would suggest it is both where he plays best and where his future lies. Adam Ashley-Cooper has one significant impediment to gaining more game time in the position. Stirling Mortlock. It is has taken until week 10, and a number of Brumby injuries, for Ashley-Cooper to finally find his way into the outside centre position.

Roughies: Whilst Digby had a few games at outside centre, the man who pushed him back to the wing must enter Wallaby consideration. Will Chambers. The former Melbourne Storm centre is a superb athlete with a lot to learn and has benefited immensely of late by playing in the free running Red’s backline. He must love having the likes of Genia and Cooper inside him and Davies and Diggers outside.

Get on the Horne

The other candidate come from the Waratahs. Rob Horne is an innately talented and silky smooth runner who looks dangerous every time he touches the ball. A natural athlete, Horne has already toured with the Wallabies however injury, has it has down too much in his short career, limited his opportunities.

Big Question: So the big question comes to what do we do with Digby and AAC? Is Ashley-Cooper our first choice fullback? If so, then Digby is probably the man for the job at 13. Alternatively, are we better served to have Digby on the wing, meaning Ashley-Cooper needs to step into the 13 jersey? Both players must be in the Wallaby starting team, and both have utility value. But because of the skills they possess they need to be picked in their best position rather than just filling in the gaps.

Stat Attack: By reviewing some stats from the first half of the Super 14 competition we can see some interesting trends. There is no use using Ashley-Cooper’s stats this season in this analysis as he has played pretty much the entire season at fullback. So, we’ve looked at two separate breakdowns. Firstly let’s look at a couple of old bulls v two young guns, Mortlock and Cross v Horne and Chambers.

NB: The figures in the table are an average per game (as at end Round 10).

Firstly, we really need to focus first on Mortlock and Cross as they’ve played the majority of the season at 13. By looking at the stats in isolation it looks like Cross has had the better season thus far. This fits with the common thought that Mortlock is looking off the pace so far in 2010. Of interest is that Stirling is touching the ball more than Crossy, but running with it less.  Now that is probably more indicative of Cross’s approach to the game more than anything else. He’s a head down, charge for the line type of player.

Or is it just a confidence thing? Perhaps we need to see Stirling on the charge a bit more, using his angles to charge the ball forward. By looking at the figure for the percentage of time each has gotten over the gain line, Morty’s doing it just over half the time he runs! Cross is up closer to 80%. This isn’t the Mortlock we know. This shows up too in the metres gained stat, with Cross getting about 60m a game, whilst Morty is almost half that.

Another stat I’ve looked at is with regards work at the breakdown. It’s an important role for the outside centre as the ball is often ‘crash balled’ inside them or the winger isolated outside, leaving them as the closest player to act.  Stirling is doing plenty of work here, more than Crossy at least, yet Ryan is doing more when the opposition is tackled. However this seems to be a very clear Force directive, with John Mitchell and co making it very clear that they expect their players to be doing a lot of counter-rucking. Or perhaps they just haven’t had the ball as much as their opponents have.

Now, by having a quick glance towards the charge of the youth brigade, have a look at Will Chambers! It has only been three games so far, one against the hapless Lions, but his figures are outstanding.  If he can continue along these lines against the likes of the Stormers, Hurricanes and Brumbies then he is a very real shot for a Wallaby spot. He’s tackling more than any of the others, they are effective, he’s running heaps and getting over the gain line most of the time. Plus he’s off loading the ball and gaining plenty of metres (again the most on the list) while he is being surprisingly busy at the ruck, particularly when in defence.

When you compare Chambers to Horne, there’s no comparison, at least statistically.  More will reveal itself as the season progresses, and Horne is a definite talent. Perhaps Horne is being restricted by his inside men and the game plan? Chambers is definitely enjoying the freedom to use the ball. Truth be told, Horne compares very favourably to Mortlock and Cross. Perhaps we are looking at a generational change here?

The other stat comparison worth looking at revolves around Digby Ioane. As of the end of Round 10 he had played five games on the wing and two games at outside centre (being injured one week, with the Reds having the bye another).  So let’s look at the stats to see if we can pick up how he’s performing in each position.

Surprisingly, for mine, Digby seems to be performing better on the wing rather than outside centre. Even more surprising is that he is touching the ball more and running the ball more from wing.   The reason for this I’d suggest is two-fold. Firstly, Digby plays as a winger with a roving commission. He can stand at first receiver, hover around behind Will Genia, or even snag the odd pick and go at the ruck.  At outside centre, he generally needs to hold his position more.

Digby – dangerous from wherever

The second factor is the increased value of counter attacking under the new law interpretations. The first benefit to the running team is the kick chase rule, whereby no one can advance until put onside by the kicker (or a player who was behind the kicker). This is allowing runners more space to run the ball back. At the same time, the interpretation of the breakdown law is definitely supporting the ball carrier, which is allowing ball runners to chance their arms in attack more. Two factors that support Digby’s style of play.

One stat that is better for Digby at outside centre is the percentage of times he’s crossed the gain line. Whilst on the face of it, it seems he is much better when playing out-centre, the reality is that he is a lot closer to the gain line there making it easier to cross. As a winger he’s been spending a lot of his time running back kicks, well behind the gain line. This in fact makes his percentage of almost 70% as a winger pretty damn impressive and one of the highest of all the Australian wingers. Digby is also making more metres per run at Outside Centre rather than wing so perhaps the argument can be made that’s he’s being more effective in the less opportunities.

In summary, there can be a strong argument made that there is a lot more value for Australian Rugby to have Ioane playing on the wing where he can unleash his dynamic running more often. What that means for the 13 jersey is a question that may unfold in the second half of the Super 14 season.  Adam Ashley-Cooper may well be the man most likely, but I have a feeling one of the young stars just promoted to the Waratah and Reds’ starting side recently (Horne and Chambers) may very well end up there sometime very soon.

Noddy’s pick? Adam Ashley-Cooper to start the season there, but watch for Will Chambers to push his claim.