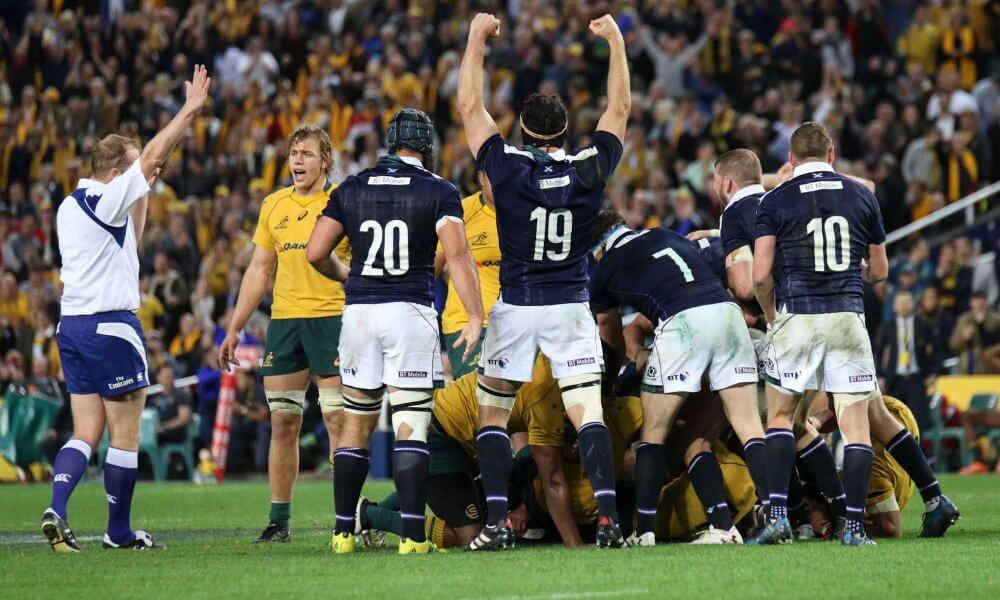 The Wallabies will be bitterly disappointed with the result against Scotland but for mine they were the better attacking team and the plucky Scots’ coach (Gregor Townsend) will understand his brave team was kissed by a pixie on Saturday evening. Scotland did score 3 tries but the first two were the result of gifts in the form of a loose pass and a charge down respectively. Will Genia might even be credited with try assists for these touch downs. However, Scotland’s 3rd try was well taken so lets take a look at them in sequence.

Credit must go to Finn Russell for pulling the strings in this passage of play and note how Reece Hodge’s tackle not only took out Scotland’s fullback (Greig Tonks) but also his team mate Dane Haylett Petty as he attempted to tackle Lee Jones. There is no doubt the Scots are a good side and very plucky but on the weekend they also got very lucky.

Like Scotland, the Wallabies scored 3 tries and were unlucky not to score a couple of others. Australia’s first 2 tries were scored by Israel Folau and came from the same attacking shape as we’ll see here. From their driving maul the Wallabies backs had a simple but effective shape loaded if the forwards drive was shut down. The shape was designed for Will Genia to bounce out with Karmichael Hunt and Tevita Kuridrani as his lead runners and Bernard Foley playing out the back of these two running threats. On the first occasion Bernard Foley was able to out pass the Scottish blitz and on the second occasion he chose to play AFL with Izzy. Here are the plays in sequence.

It might be argued that the Wallabies didn’t have to work too hard for these tries and that may be true. However, they were scored off the back of some sounds tactics and excellent skill. Bernard Foley’s distribution and kicking skills are to be greatly admired and Israel Folau is in a rich vein of form. He’s simply a phenomenon.

The Wallabies fighting spirit should be admired and they had a massive crack at Scotland in the dying stages of the match. The Scots’ try line defence was incredible at the back end of the match thanks in large part to their Australian defence coach (Matt Taylor). However, he did not make the tackles so credit must go where it’s due…the players. Here are a couple of clips to illustrate the ding dong battle in the last 10 minutes of the match.

The pictures show just how close the Wallabies came to scoring and stealing the win. Even in extra time had Michael Hooper been able to keep the ball alive with an offload to Will Genia the result may well have been different. But that’s the game and the spoils go to Scotland whilst it’s likely to be a feisty week in camp for the Wallabies as they prepare for Italy in Brisbane.

Italy are coached by Conor O’Shea and Mike Catt, both very astute creative backs much like Gregor Townsend. In the recent 6 Nations Championship Italy took a creative approach to the off side line in defence so expect them to have a bag full of tricks ready on Saturday.