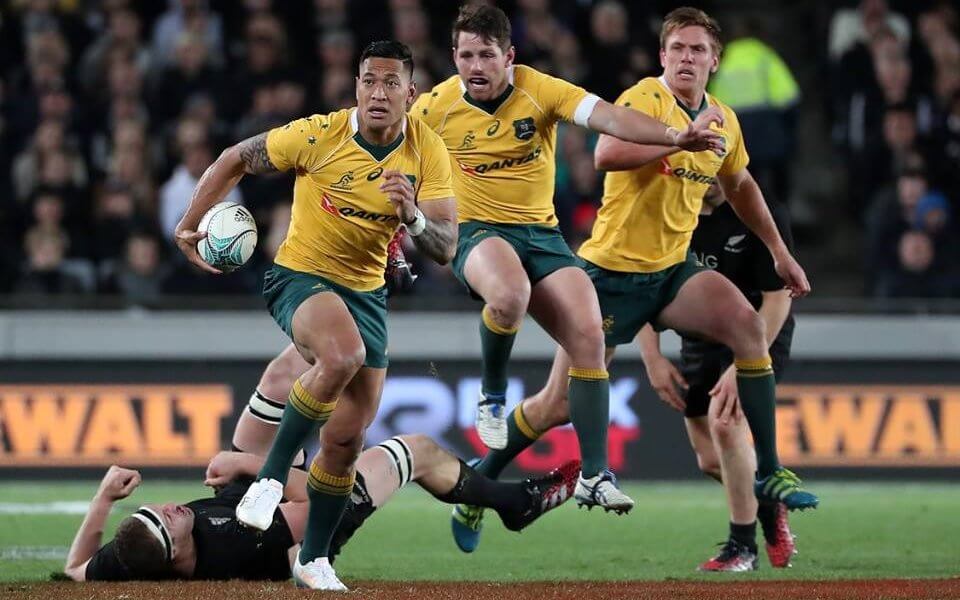 The Wallabies kicked off their 2017 international campaign with a return to afternoon rugby by taking on the Flying Fijians in Melbourne. After a disappointing 2016 season and a borderline horrendous Super Rugby season, the pressure was on the Aussies to win back the many rugby fans who are so disgruntled with the code at the moment.

For the Fijians it was a rare visit to Australia for a test match, the first since 2010, and a chance to make a strong statement in front of their many Australian based fans and to World Rugby as a whole.

Despite their short preparation for the test, the Wallabies looked to run the ball wide from the very beginning of the game and managed to find space quite regularly. The approach perhaps caught the visitors on the hop and the Aussies were able to score early when Bernard Foley kicked wide to Israel Folau to claim (kind of) the ball and score a try. It’s a play that the Wallaby fullback would have been a part of on many occasions at this ground in his previous life as a Melbourne Storm player and is surely one of the most underplayed options in the Wallaby arsenal.

The points kept flowing soon after when Henry Speight went over in the corner. The try was scored following a clever inside offload from big Adam Coleman to a charging Scott Higginbotham who found Dane Haylett-Petty outside. The Force fullback then floated a pass out wide which fortuitously found its way to Speight to finish the movement out wide.

After ten minutes it was all Australia and fans could have been forgiven to thinking that they were in for a big Wallaby win. In fact it wasn’t until the fifteenth minute that Fiji attacked when fullback, Kini Murimurivalu, charged his way through the defence only to find tight head prop, Peni Ravai, in support. An aimless kick over the top by scrumhalf, Nikola Matawalu, halted any Fijian drive.

Israel Folau was enjoying some rare space outside and running freely, until a reckless high tackle in the 21st minute saw him sent to the sin bin for ten minutes. It was a momentum changer for the Fijians as they found their way into the match. Rio gold medallist, Leone Nakarawa, was creating havoc at lock while Ravai proved a handful for the Aussie defense. It looked as if Fiji had crossed for their first try from a 5m scrum, however they were penalised for holding onto Hooper at the scrum.

Still on the attack, flyhalf Ben Volavola threw a pass that Foley was able to intercept and run down field with. The play soon died out however a penalty was earned. It was a sign of the pressure the Aussies were under that skipper Hooper opted for the kick, which Foley promptly converted.

The score was 18-0 to the Aussies and that’s the way it would stay until the half. While the Wallabies had come out of the gate hard, the Fijians hung in and were a constant danger on attack without quite making the most of their limited opportunities.

The second half took a while to get going however the Aussie set piece was dominant and giving the home team some respite from the pressure they were facing from the off-loading Fijians.

Two missed try opportunities by the Wallabies, one where Speight knocked on another cross field kick and another when Tevita Kuridrani put a foot in touch close to the try line, meant the Aussies had not scored a try for half an hour.

It was that Foley-Folau combination that amended that anomaly soon after. With Karmichael Hunt playing first receiver from a set piece play, Foley drifted wide before dropping a beautiful short pass into Izzy’s lap. Folau dashed 45 odd metres to score his second try of the match and thus equalling the total amount of test 5-pointers he scored last season.

A Fijian in a white jersey soon scored a try of his own when their winger Vereniki Goneva charged through the Australian defence to score a try. It followed a hectic period of play in which both teams attacked, turned over the ball and counter attacked again.

At risk of the game becoming too loose, the Aussies reverted to the tried and tested with a 5m lineout establishing a strong rolling maul from which replacement hooker Stephen Moore was able to score. Moore was joined on the field by the full Australian bench meaning test debuts for Joe Powell and Richard Hardwick (who snaffled a smart pilfer soon after) while starting debutants Hunt and Ned Hanigan played the whole match.

The test ended with two more tries to Fijian wingers – one to Timoci Nagusa and one to Henry Speight and the Aussies finished up with a 37-14 victory.

The match was never in doubt following the two early Wallaby tries. The Izzy Yellow Card did give Fiji a lift but one they weren’t able to convert into points.

Folau and Foley looked terrific for the Wallabies, while Genia’s return to Australia was a worthy trip. Up front Coleman and Alaalatoa were powerful. Fiji were best served by Ravai and Nakarawa. I’m giving this one to the big lock forward Leone Nakarawa who was a handful every time his mammoth hands touched the ball.