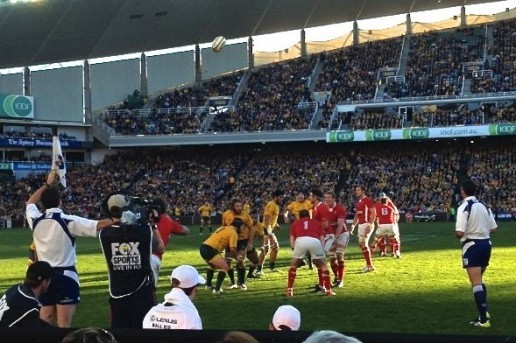 The Wallabies have come away 20-19 victors with another hard-fought win over a determined Welsh outfit in Sydney.

In a successful return to afternoon rugby at the Sydney Football Stadium, the Wallabies swept the series and remain unbeaten by the Welsh at home since 1969.

There was only one try apiece and while the game often looked like opening up, it never quite did.

The first half was a seesawing affair, with the sides trading penalty goals and neither really looking like scoring a try.

The Wallabies went into the sheds up 12-9, which was probably a fair reflection of the tightness of the opening stanza.

Joubert blew five penalties to each side in the first half and they were often at points where the game was just looking like opening up.

While the flow of the game was a bit stunted, there were promising signs from a few of the Wallabies.

Sharpe and TPN looked good in the forwards, while Barnes and Horne were good at the back. David Pocock earned two vital breakdown penalties when the Welsh were hot on attack.

Their execution failed the Wallabies on countless occasions, with dropped balls, forward passes and a few brain fades stopping them when they looked most threatening.

Kurtley Beale looked like he’d been rushed back to Test rugby too quickly – he made breaks and slotted into first receiver fairly often, but also made a number of errors.

While it didn’t have the same spark, the backline had better balance in the previous Tests.

The Welsh did a good job of disrupting the Wallabies’ ball and often held players on the ground or far away from play, concentrating heavily on Bam-Bam. It was one of their only real disruptive options as Craig Joubert was hard on any infringements at the breakdown, especially in the first half.

The set piece was an area of concern as the lineout dominance of the last couple of weeks disappeared and the scrum was constantly under pressure. It was also where the Wallabies gave away most of theor penalties. The scrum seemed to perform better once the replacements of Moore, Alexander and Dennis came on but they were immediately under the pump with a 5-metre scrum to Wales that eventually resulted in a try to Stephen Jones.

That play came off the back a break from KB, who turned the ball over with a chip. The Welsh then made a break up the midfield before toeing ahead and were only held out with Ioane taking the ball over the line.

Australia hit back just after the Welsh try with Rob Horne getting one of his own.

After the initial break, the Wallabies held onto multiple phases picking and driving until Barnes saw the overlap and spread it to Horne, who almost tripped before he got to the line and only just grounded the ball.

Barnes missed the conversion and the Welsh got a chance to get back in the lead soon after the restart when the Aussie scrum was penalised on halfway. Halfpenny nudged it over, putting the score at Wales 19, Australia 17.

The Wallabies were on the back foot again and got out of the 22 thanks to some obstruction from the Welsh.

Once the ball was back in the Welsh half, discipline let the boyos down again and Berrick only just scraped a penalty to regain the lead for Australia.

Wales had one more opportunity after a ball came loose yet again from a Wallaby break. James Hook toed ahead and had a clear run to the line but the ball rolled into touch.

After that the Wallabies showed admirable patience and held onto the ball until Genia booted it into touch as the full time siren blew.

What did you think of the game?