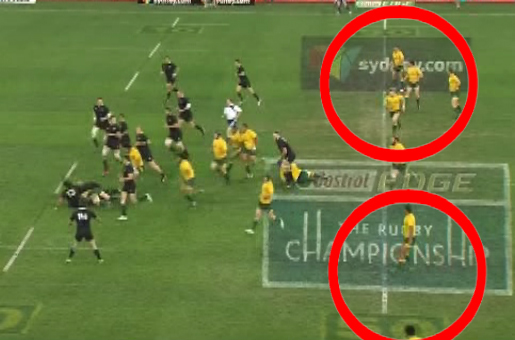 Today I’m going to look at how the Wallabies can set up a platform for attack in general play.

During the series against Wales and the first two matches against the All Blacks the Wallabies haven’t seemed to be attacking in general play with any consistency. They keep chopping and changing — from pick-and-drive to structured slow ball, to same-way attack, to an emphasis on kicking, to throwing the ball around from deep in their own territory.

It may be that the Wallabies are trying to be unpredictable with their attack but the disadvantage to these variations in attack philosophies within each match is that at times some of the players look like they’re not certain what’s coming next. Being a little predictable is better than not having all your players working together.

We all know the forwards have to get the ball over the gain line and provide quick ball for Will Genia if the Wallabies are to threaten opposition defensive lines.

As I showed in this article after the series against Wales the Wallabies have recently been very disorganised in attack.  In that series it often appeared that the team had hardly trained or played together.

I think the Wallabies have got to set a base attacking philosophy for the forwards that they use for the majority of times they’re attacking. This would allow the playmakers to leave the forwards running the base pattern until an opportunity arises and they call for the ball. The Reds have shown over the last three years in Super Rugby that this approach works very well.

What should that base attacking pattern be? It works best if your base pattern is simple and is something you’re already using – there’s no need to reinvent the wheel.

One thing I don’t want to see the Wallabies doing more of is using structured slow ball as I detailed in this recent article.

The following video shows the pattern I believe the Wallabies should adopt as their base pattern.

It’s not rocket science, is it? This pattern is used by plenty of schoolboy teams, it’s used in club rugby and it’s the base pattern the Reds use. Whilst it may be very simple it’s very effective when all your players know what’s coming next.

As you can see from the video the Wallabies are already using the pattern and it’s been working, so why not use it more and develop it so the Wallabies forwards can get the ball over the gain line more than they currently do?

Part 6 of my series will cover the Wallabies’ defensive performance.

Podslam 77: What’s In A Number? with Andrew Blades
STAT ATTACK: Just who are these Saffas?