Time in Possession – Wallaby Matches in 2011

Time in Possession – Wallaby Matches in 2011

Recently I published my Involvement Rates for the Wallabies in 2011.  As you probably know this is a measure of how much work players are doing in key areas during a match and to improve the accuracy of the measure I’m now calculating the Involvement Rate based on the time the ball is in the possession of both teams in each match, rather than using the clock time as I have previously.

This exercise has thrown up another interesting statistic – the percentage of time the ball is in possession compared to clock time.

Before I detail those numbers I’ll clarify how I measure time in possession.  One of the statistics I measure is the number of times each team has possession and to record that I record the start and end of each possession.  Whilst that started out as an exercise just in recording the numbers, each time I record an event in a match the time stamp of that event is also recorded and that’s what’s made it possible to go back through 2011 to collect the time in possession data. 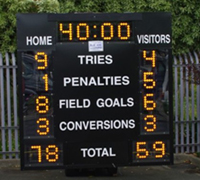 The Involvement Rate is only relevant for the times the ball is in possession as that’s the only time a player can make a carry, make a tackle or be involved in a contest for possession (ruck or maul).  Accordingly, my time in possession excludes:

As a result, the time in possession I record is the actual time teams have the ball to work with during a match. 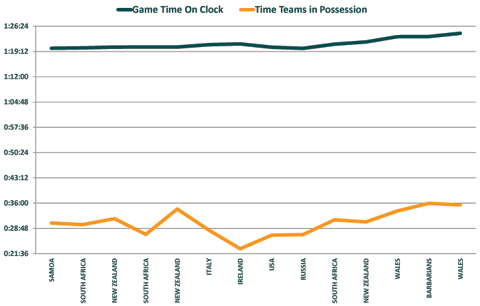 You may be surprised with how low those numbers are but I wasn’t as I’d had some advance warning of how low they could be.  After the match against Ireland in the Rugby World Cup one of our great contributors of statistics to the site, Ruckin Good Stats, pointed out that there was this significant variance between the possession time and clock time for each game which could be throwing out my Involvement Rate.  He was quite correct and that’s what prompted me to track back through 2011 to find the times in possession.  Ruckin Good Stats and I measure time in possession slightly differently and he does it live, which is an amazing effort.  If you want to see the statistics he provides visit www.ruckingoodstats.com and follow him on Twitter @ruckingoodstats.

By way of comparison the IRB released data in 2009 that showed that in the previous five years over 230 Tier 1 games the average time the ball was in play was around 38 minutes.  The IRB data included the ball being in play for 42% of Tri Nations matches in 2009 and for an average of 34 minutes and 24 seconds in the 2009 British and Irish Lions tests against South Africa (about 42% of clock time).

The IRB numbers show an average of 35 minutes and 25 seconds ball in play for all matches at the 2011 Rugby World Cup.

Ball in play times will be slightly longer than my time in possession because ball in play is measured as long as the ball stays within the confines of the field, whereas I’m measuring time a team actually has the ball to work with.

I also decided to look at time in possession numbers for club rugby.  Over eleven matches in the 2011 Brisbane Premier competition that I have data for; the average time in possession for both teams was 29 minutes and 28 seconds (about 36% of clock time).

The IRB don’t reveal exactly how they calculate times for ball in play so it’s not clear that there is a direct comparison between those numbers and mine.  Regardless of probable differences between how time in possession may be measured it’s clear that we’re not even getting to see 40 minutes of ‘play’ from each 80 minute match.

The other interesting factor from these numbers is what effect a ‘slow’ match may have on the Wallabies performance.  The match that stands out obviously is the one against Ireland where I recorded only 22 minutes and 58 seconds of possession, by far the lowest in the Wallabies season and nearly 7 minutes less than the average for the season.  If you ignore that match as an outlier the average time in possession in matches during the Wallabies 2011 season increases from 30 minutes and 22 seconds to 30 minutes and 57 seconds.  That 7 minutes difference therefore meant that the time in possession in the match against Ireland was nearly 23% less than all others in 2011.

Whilst the time in possession numbers may be lower that many of you expected, I’m currently reading a book titled “A Game For Hooligans – The History of Rugby Union” by Huw Richards which includes some examples of the impact of the old rule where you could kick the ball out on the full from anywhere on the field and the ensuing lineout would be set where the ball went out.  In the 1921 test between New Zealand and South Africa in 1921 at Dunedin there were 114 lineouts and in the 1963 test between Scotland and Wales at Murrayfield in 1963 there were 111 lineouts.  I can only imagine what the time in possession numbers would have been for those games!

Memo to Melbourne: Tackle or be Damned
Reward offered for GAGR Interns