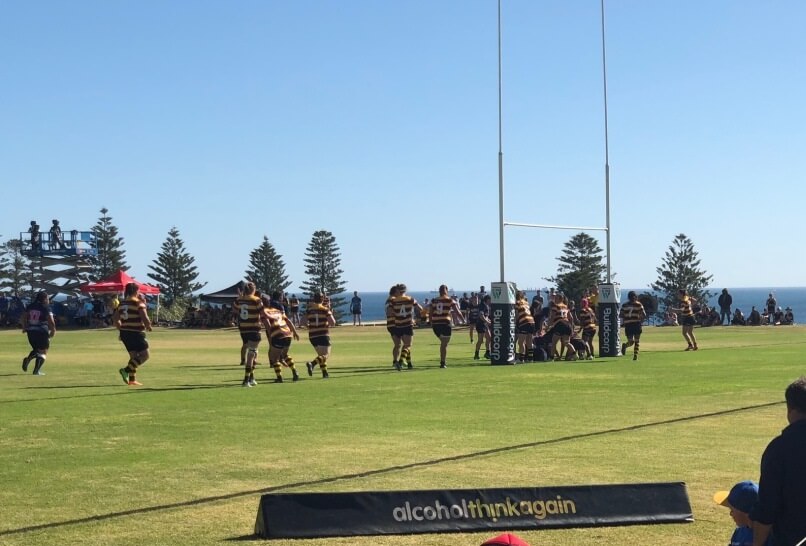 A beautiful warm afternoon greeted the players for the much anticipated first game of the new Super W competition. There was a sense of excitement in the sizable crowd as the two teams entered the field and lined up ready for the first kick-off, eager to begin this new era in women’s rugby.

It was immediately clear that the Western Force intended to make a statement as the first act of the match resulted in a crunching tackle on the Melbourne Rebels receiver as she caught the kick-off. This got the already parochial crowd right into the game and a couple of plays later, following a couple of slick offloads, the Force were in under the posts courtesy of Vesinia Schaaf-Taufa for the first try of the game in only the second minute. Kendra Fell easily converted from right in front to give the Force an early break.

The Rebels had barely had time to regain their composure when the Force got the ball wide to exciting young winger Courtney Hodder with a bit of space to use. After beating three Rebels defenders with pure speed she dotted down under the posts for the Second try of the match and another easy conversion for Fell. The rebels managed to push the Force back into their own 22 for a time and were starting to apply a little pressure to the Force before a deft cross field chip from inside center Tui Cope again found Hodder in space with the same result as before and the Force were up by 21 within the first 10 mins of play.

From the restart, the Rebels forwards stepped up their intensity and managed to grind out some metres through the centre of the park eventually resulting in a penalty for offside and their first chance for points in the competition. Halfback Georgia Cormick slotted the ball through and the Rebels were on the board.

Not to be outdone, the Force forwards hit back with some good close ruck work of their own, leading to a try at the other end to Hooker Tara Reed and another easy conversion for Fell. The Rebels defence was really struggling to handle the continuity of the Force attack, with multiple offloads stretching the defensive line until Cope made a decisive break, offloaded to Schaaf-Taufa who drew the last of the defense before getting the ball out to speedster Hodder who ran in untouched to complete her hat-trick in the 20th minute. Fell took too long on the conversion this time and was charged down.

Not satisfied with a hat-trick, Hodder showed that she is as adept at going through defenders as around them as she skipped through the Rebels defense close to the line and again dotted down for her fourth and the Forces sixth try of the game to take the score out to 40-3. A late challenge on Hodder after she had scored resulted in Tessa Brown of the Rebels receiving a red card meaning the Rebels would have play for over 50 mins with only 14 women on the field. The Force wasted no time in exploiting this numerical advantage with some good work down the left wing resulting in outside centre Zakiya Kereopa scoring in the corner.

Following this try the Rebels actually managed to improve despite the player off the field and the game evened up for a time. The Rebels managed to put more phases together and put a bit more pressure on the Force in their own half. After a period of sustained pressure Number 8 Loanna Lelei charged over from close quarters to score the Rebels first 5 pointer of the competition on the stroke of half-time. The conversion was unsuccessful and the teams went to the sheds with the score at Force 45 – Rebels 8.

The first 10 mins of the second half was a little more error-prone for both sides as  substitutions were made from each side which perhaps disrupted each team a little. The Force were perhaps guilty here of trying to push things a little too much and the Rebels were simply holding on for all they were worth at this stage. The Rebels just couldn’t keep resisting the pressure of the relentless attacks and once the Force cut out the rushed plays they started scoring again. First Kereopa completed her brace with a great run down the right hand touch line, then Hodder scythed through a scattered Rebels defence from beyond halfway to score in the left hand corner. 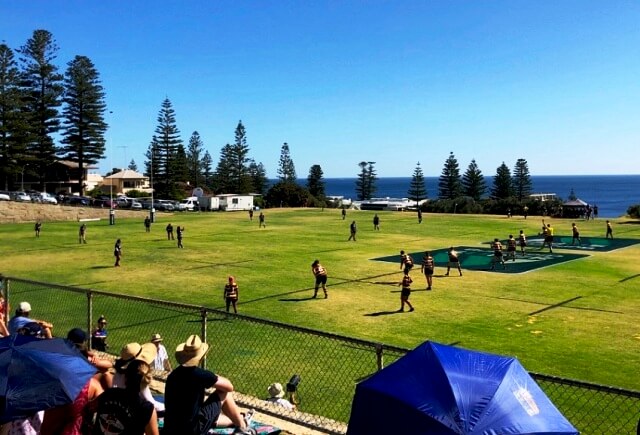 Perhaps the Rebels were distracted by the view? (Photo credit: Michelle Ashley-Emile)

Some excellent support play and passing resulted in a beautiful team try for the Force, scored by Flyhalf Trilleen Pomare and Fullback Madeline Putz capped off a wonderful purple patch for the Force with a fourth try in 15 minutes to stretch the score out to 71-8 with a little over 10 minutes to play. A good break down the right wing and some solid follow-up play allowed the Rebels to finally hit back with a consolation try in the right corner on 71 minutes, scored by hooker Ashley Marsters.

Unfortunately for the Rebels, that was not the last scoring play of the day, Hodder got her hands on the ball and again the Rebels defence simply wasn’t able to stop her as she sliced through for an incredible 6th try of the match! But the final act of note was a well worked forwards try for the Force, finished off and converted by replacement front rower Darryl Wickliffe. This brought the final score to Force 85 – Rebels 13.

The Force were simply a level above the Rebels today in every aspect of the game and it showed in the final score. It did not help the Rebels cause to lose a player to the bin in the first half, but in all reality the damage was already done. Hopefully they are able to learn from this experience and come out of it a better side. As for the Force, this win will certainly give them confidence that the expansive game plan they are looking to deploy in this competition can be very effective and very difficult to stop. The movements looked slick and well drilled and will test the defenses of all other sides in this competition. The defense too was very solid and held up through those periods when the Rebels managed to apply some decent pressure of their own.

It must be said that despite being outclassed, the Rebels players never stopped trying. The hits were as hard in this game at the end as they were at the start and they certainly were hard hits! Special mention goes to halfback Georgia Cormick who was busy all game and looked the Rebels best today.

For the Force, Vesinia Schaaf-Taufa seemed to be in everything in the first half, Zakiya Kereopa showed her skill as a finisher with a couple of tries and Tui Cope looks like she will be tough for any team to handle. She bent or broke the Rebels line all game and when she was caught the offload almost always found a support runner to keep the momentum going. But the best on ground by far was the incredible Courtney Hodder. Strength, skill and speed to burn mean that she will certainly be someone other teams will need to mark closely. If she can keep this current form, she seems an absolute certainty for a Wallaroos spot. One to watch.