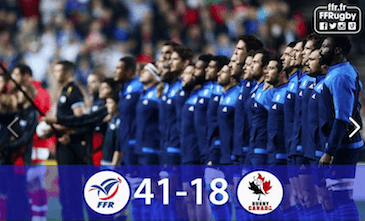 France gave another masterclass in Stratagem & Secrecy as they laboriously limped past Canada in a turgid affair. The last pockets of Irish resistance to a well-deserved sense of superiority over France have fallen. In spite of all warnings, the wary and haughty Irish have been lulled into the illusion of French predictability.

How could it be otherwise?

To be fair, things did get off to a bad start. After a couple of phases on the halfway line, Michalak sold a dummy, stepped inside, fended off and gave a no-look flick pass to Fofana who dived ostentatiously over the try line. As if it weren’t enough, the former Toulon waterboy stepped and took another gap a few minutes later before delivering a wonderful chip kick to Fofana, who almost caught it in the in-goal area. The scrum was dominant, ruck cleaning effective, Bastareaud used as pivot, and Dusautoir even stole a ball on the opposition’s lineout.

France were showing way too much, and decided to revert to type: confront then conceal. After scoring off a driving maul, the team abruptly released the early pressure: restarts were woeful (one of which resulted in the first Canadian try), kick-and-chase without chasers, the famous Lagisquet up-and-hold defence pattern turned up-and-leak (which let in a second try), discipline was poor and breakdown work nonexistent.

Credit to Canada: they played to their strengths. Knowing that they would be in trouble in the scrum, they had their no. 8 pack behind the blindside flanker and their no. 2 hook the ball to the loosehead prop, which allowed them to exit quickly. They read France’s complex attacking patterns extremely well, and took advantage of the flaws in Lagisquet’s only set-piece move (Basta crashball = predictability + slow support) to hold Bastareaud up and force a maul. 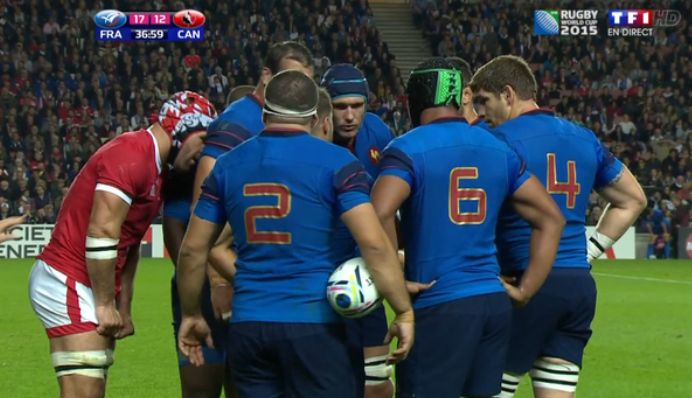 Jamie Cudmore having a chat about lineout combinations with his French mates.

While the Canucks showed good option-taking, technique in contact and support play in the lead-up to their second try, they should never have been allowed to make ground so easily. The French defence looked like a bunch of drunk Homer Simpsons staring at the fridge open at night.

Average performance. No glaring mistake. Seemed to be obsessed with cracking down on certain infringements (side entry to the ruck from attacking players) while being very lenient with hands in rucks and players slowing the ball down. Didn’t ref the advantage consistently and went back for the penalty too quickly on a couple of occasions.

SHOULD I BOTHER WATCHING IT?

Definitely not. Highlights will suffice.

Could also have gone by the name of interval, or overlap, or set-piece play. Ideals long gone of French rugby. When he's not banging on about this lost cause or screening games for a sign of flair, he's cheering for the Wallabies or rambling on about how good was life back in Newtown.