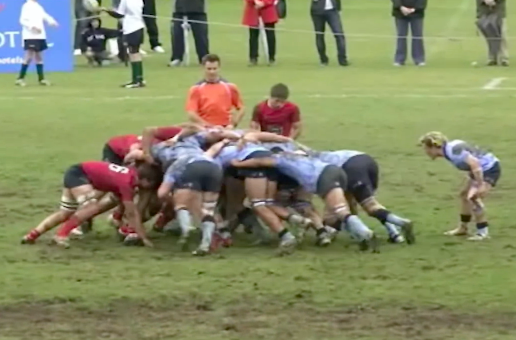 The 38th Novotel Australian Schools Rugby Union Championships are over and the dominance of Queensland Schools was broken. After six years of Queensland victories (two by its IIs team) NSW I beat Qld I in the Final and NSW II beat Qld II in the match that decided 3rd and 4th places.

For the first time in 12 years the Division I and Division II Championships were run together. Formerly the Div II Championships were held earlier, but because of the Global Financial Crisis the extra costs of having separate tournaments could not be afforded. While that meant that a few of the best Div II players could not be considered for the Div I Combined States team, as has happened in the past, it made for a cracking week of rugby and added to the drama.

On Day 1 the indigenous Lloyd McDermott Rugby Development side unveiled their ceremonial dance in front of the Northern Territory team before the opening whistle. While it was not exactly a haka, and wasn’t intended to be, it was well done and got a huge hand from the crowd on the main ground.

When the game started the Lloydies scored a smart try but then it was one way traffic for NT and they got a big lead. But the Lloydies came back and the score zig-zagged. The indigenous lads won 36-25.

On Day 2 there was another bit of drama. The NT had recovered from their Day 1 disappointment and were leading SA 23-0 at oranges but SA must have got the mother of all pep talks at the break, coming back to win 29-23.

That was the curtain-raiser for Day 3 and the virtual final because the Lloydies and SA were both undefeated. After being tied up 5-5 at oranges SA was 12-10 ahead, then came disaster for the indigenous lads: a clearing kick near the dead ball line was kicked right into the guts of a SA player who fell down with it and scored: 19-10.

But with a couple of minutes to go the Lloydies went under the posts to be just 17-19 down. Then, on the bell, a Lloydie ran up the field near touch and when challenged cross-kicked to a teammate. It was just him and the ball and… bounce, bounce and the next bounce skidded in the wet, and he knocked on the low ball. Game over. The lad was crestfallen as SA won. But well done them: they won 3 out of 3.

A President’s XV was picked from the four Div II teams and they played the visiting Tonga Schools team on Day 4. This was a wonderful innovation and the new combination acquitted themselves well before going down 13-36.

The form guide was right for a change and NSW I played Qld I in the Final and ditto for the 3rd/4th game for the IIs. There was a bit of a scare on Day 3 when Qld I were challenged by NSW II but they held onto win 13-10.

NSW II 37 – Qld II 22
This game was virtually over at oranges by which time NSW winger, 16 year old Harry Jones, arguably the player of the tournament, had three tries to his name and the score was 34-5. Qld came back with three tries after the break but it wasn’t enough.

NSW I 26 – Qld I 7
The Blues got a shock when Qld flyhalf Greene cross-kicked early right on the money to fullback Placid charging through. He leapt higher than the stationary NSW winger, caught the ball and scored.

That was as good as it got for the guys in red because NSW winger Kellaway stepped the try scorer for his own five-pointer. NSW was getting on top but at only 7-8 behind at oranges Qld were well in the game.

NSW got more reward for their better play after the break: a quick switch found Qld short of numbers and a second Kellaway try; then a break by inside centre Moeroa and his well-timed pass saw Stewart score the third try for NSW.

Congratulations to the ASRU for running a slick tournament with the added load of the Div II matches, and well done to St. Ignatius at Riverview for the hospitality. Nor could there be too many complaints about the match officials: they performed admirably.