The Lions came into this match with one win from six matches, having lost four-from-five by less than seven points. The Reds were sitting atop the Australian conference with four wins, but still looking for the attacking form they showed last year. After the game nothing much has changed: the Lions are still picking up losing bonus points, and the Reds are winning without appearing to be in form.

The afternoon match started with promise as both sides looked to play attacking rugby. The Lions employed the old head and accurate boot of Andre Pretorius to keep the Reds pinned in their own half and constantly under fire from the high ball. This tactic, along with the unfortunate but justified sinbinning of James Slipper and the totally unjustified sinbinning of James Horwill, kept the Reds in check for the entire first half.

The Reds for their part continued with the hybrid field position/running rugby game they seem to be trying to develop. One minute they will be sedately playing field position, and then some kind of cosmic switch closes and the team goes into hyperdrive, attacking any way they know how and a few they don’t.

The early plays from both teams were fast and full of ball movement. Quade Cooper missed an early shot at goal and Andre Pretorius missed his attempt after the James Slipper sinbinning. Here’s how that happened: the Lions are running back Cooper’s 22 drop-out. Hooker Bandise Maku hits the ball up on the blind side of the ruck. He skips past Digby Ioane and runs into Slipper’s shoulder mid-hop. He has his body weight forward and his feet are a few inches off the ground. Slipper’s hip-level tackle is now a leg-level tackle and only one thing can happen: Maku’s legs are lifted, he lands on his shoulder and Slipper lands in the bin.

While the Reds were down to 14 the Lions scored eight points through an offside penalty and a good try to Killian. Unfortunately for the Reds, referee Vinnie Munro missed a glaring offside from Deon van Rensburg as he chased a Pretorius bomb in the lead-up to the try.

A few minutes after Slipper’s return, Munro pulled play up at a ruck and called Reds captain James Horwill out. The conversations went something like this.

Horwill: “I didn’t hit the ball, I grabbed  his arm”

Horwill had reason to be incredulous and did well to keep his comments to this. Leroy Houston and Adam Wallace-Harrison had tackled JC Janse van Rensburg and Horwill was the third man in, trying to counter-ruck over the ball. Lions halfback Jano Vermaak picked up the ball; Horwill leant through and knocked his arm, causing him to drop it. Horwill was never part of the tackle and lost his footing only after the contact with Vermaak. This was hardly worth a penalty, let alone a yellow card. In the outcome, Pretorius slotted the penalty to make the score 11–0.

The Reds hit back quickly. After some good lead-up work from his forwards Genia took a couple of steps to hold the loose forwards. Cooper ran to the line, held up two players of his own and put Luke Morahan through a lovely hole off his outside shoulder. Morahan used his speed to make the 20-metre run to the line. Harris took over the kicking duties and slotted the extras; 11–7 to the Lions.

The teams then exchanged penalty goals for “not releasing” offences. Harris kicked the Reds’ as Horwill jogged back on, making it 10–3 to the Reds while the skipper was off. Pretorius’s shot made it 14–10 to the Lions overall at oranges. 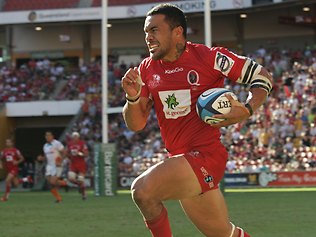 One minute into the second half Digby Ioane dropped a midfield kick, setting up Jaco Taute for a easy try. Pretorius missed the conversion; Lions 19–10.

Unfortunately for the Lions, Ioane, who had been having a reasonable game, took this personally — and spent the rest of the match making up for his mistake by being everywhere!

This seemed to be the catalyst for the Reds to get their house in order. From the next kick-off James Horwill took the ball at full flight and roared into the Lions’ 22 before Saia Faingaa was run into touch. It was a beautiful bit of play from the big forward and should be on his highlight reel for a long time to come. The Lions won the lineout and hoofed it downfield, but then allowed the Reds run it all the way back and Coooper scored under the posts. The kick was good; 19-17 to the Lions.

The second half never reached the heights of the first. Fatigue was evident into both teams’ games. Genia and Cooper asserted more influence as space appeared in front of them; Pretorius took the boot option too often. The Lions conceded two penalties within Harris’s kicking distance, and before long the Reds were up 23–19.

The Reds’ final try was built up over many phases. Digby Ioane took the final pass two metres out and there was no stopping him from there. Harris’s conversion made it 30–19. But the visitors seemed know they did not have the energy to chase the bonus goat, and it was their turn to concede kickable penalties as they tried to shut down the match: one to Pretorius and one to Rory Kockott. Final Score: 30–25 to the Reds.

Wallaby watch: Cooper, Genia and Ioane were standouts for the Reds. Horwill, Holmes, Wallace-Harrison and Anthony Faingaa deserve mentions. Mike Harris had a good day with the boot but looked a bit lost at fullback, especially under the high ball.

Rebels are Now a Force to be Reckoned With
Dwyer’s View: Making Mistakes!