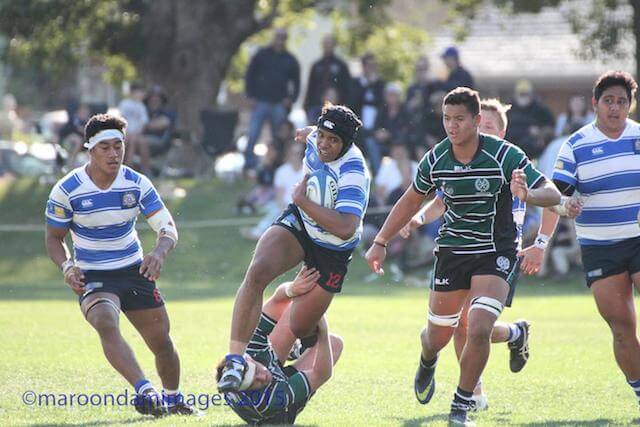 IGS v TSS was a tight match last year at Ipswich (12 – 7 to TSS). This year TSS would be aiming to continue their unbeaten run, while Ipswich, winless for the season so far, would be planning to use their physicality to put TSS off their game.

TSS started strongly, and soon won a penalty and kicked to the corner. The Assistant Referee ruled dead in goal however, and IGS restarted with a 22 drop.

IGS worked their way downfield, and scored first points through a penalty, kicked by Geoffrey Robertson. (Not the lawyer, as helpfully clarified by the ground announcer). TSS 0 – IGS 3.

TSS received another penalty for a high tackle on Dowd (15). But, from the quick tap, the pass went into touch. TSS won a turnover, but the opportunity was lost with another loose pass.

From another penalty to TSS, the lineout was overthrown, resulting in pressure from IGS on line. Good runs from 15 (Robertson), 14 (Niumataiwalu), 6 (Keepa) built pressure before another off-side penalty to IGS in front of the posts (0 – 6) after 22 minutes

From the restart, IGS knocked on. TSS were then awarded penalty, and IGS received a yellow card for shoulder charge on Pere (8). A quick tap was taken, and Mavoa (6) went close to the line, but IGS won a penalty for TSS not releasing.

Riley (13) then beat 3 tackles before being hit with high tackle and losing the ball. No penalty was awarded, but TSS won the ball back with a tight-head scrum win. Pere, in the backline for the 7-man scrum, was stopped just short of the line, but could not be stopped 2 phases later and scored TSS’s first try. (5 – 6).

There was only a couple of minutes left in the 1st half, and IGS had an opportunity from the kick-off, but knocked on. IGS were then penalized for a late tackle after a clearance kick from Campbell, and from a good line-out win from Blyth (5), Pere barged over from 10 metres out, to give TSS a 12 – 6 lead at half-time.

The TSS drum-line had barely left the field from the half-time break, when Sergeant (14) received the ball from the restart, stepped around his winger, and raced away to score untouched, with the full-back Robertson still stranded midfield after taking the kick-off. TSS ahead 17 – 6 after 30 seconds of the 2nd half.

IGS forced an error from the restart, but then lost the ball themselves close to the line. Allen (7) pounced on the loose ball, and Campbell cleared the line. IGS won a penalty shortly after, and kicked for the corner. IGS over-threw the line-out and Allen ran the ball out of the 22. Pere then scored his hat-trick with a 20 metre run. TSS 22 – IGS 6

Then the flood-gates opened, with Ball (3) making a good run from the kick-off. The ball was spread wide, first to the right through Dowd (15), and then to the left, where Gooch (11) scored in the corner. TSS 27 – IGS 6

TSS were attacking again from the restart with Pere running the ball out of the 22. IGS held out and won a penalty, but lost possession shortly after. From a scrum restart, Riley (13) sliced through and scored untouched from 40m out. Sergeant took over kicking duties, and landed the conversion. TSS 34 – IGS 6

IGS had another chance to score, winning a penalty in the TSS 22. A good run by the IGS replacement (18), resulted in another penalty, but IGS couldn’t secure the ball from the line-out, and TSS cleared their line. Robertson (15), Russell (12) and Keepa (6) made ground with ball-inhand, but a kick ahead from Robertson, led to Riley returning the kick, with Campbell chasing to score after toeing the ball over the line. TSS 41 – IGS 6

With time almost up, Dowd completed the dominant second half, with a grubber kick and regather to score near the posts. Full-time score TSS 48 – IGS 6

Pere (8) – 3 tries and made ground every time he got the ball. However, he must give his coach nightmares with one-handed slam try scoring technique.

Sergeant (14) and Dowd (15) – Under-rated members of the backline. Defended well, and each scored classy solo tries.

Robertson (15) – Showed his attacking skills from fullback, and defended well.