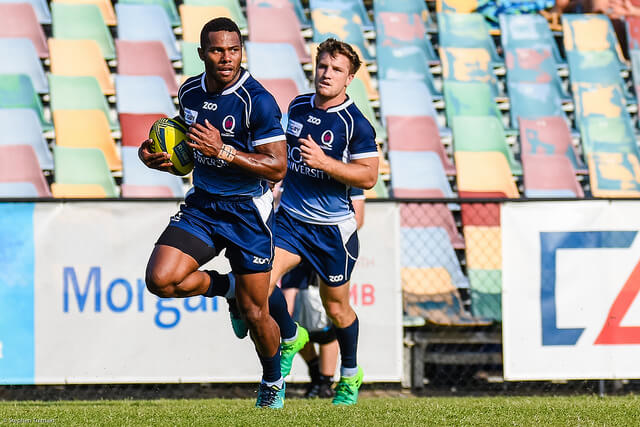 Yes, sorry about the delay of this match review. But this game was totally worth it.

In what was one of the most outstanding matches in NRC history, Queensland Country went over to Fiji to take on the might of the Drua. Already, the home side had developed a reputation for being almost unbeatable at home, as no Australian side had even come close to knocking them off.

But Queensland Country are a different beast this year.

In front of a very healthy Lautoka crowd of around 6,000 (my guesstimate), the match got off to an absolute flyer, with both teams playing from end to end in exciting fashion. However, in the sixth minute it took a charge down from Caleb Timu to have the visitors on the board. Country up 0-7.

If there is one thing the Drua will definitely learn from being in the NRC, it is the need to improve their discipline. A horrifying penalty count against the homeside saw their momentum stifled time afte time. Considering how dangerous they were looking, the making of silly mistakes was proving costly.

Timu took advantage of some napping Drua defence to go over for his second in the 25th minute, and Country were up by 0-12. It was starting to look ugly for the homeside, particularly when lock Mataiasi Ucutabua was sent to the bin for repeated infringements. But then, as they have all season, the Drua surprised everyone with Alifereti Veitokani slicing up the Country defence. Country were able to cover the little fly half but weren’t able to stop the Drua’s momentum, as skipper John Stewart was on the receiving end of a lovely try to get the hosts back within five.

The Drua then shot themselves in the foot when fullback Apisalome Waqatabu was sent to the bin for tripping. However, just before halftime, the cheese was shown Country prop Sef Fa’agase, for repeatedly disrupting the Drua’s free kick. Neither side was able to score again, and both sides look absolutely shattered as they headed for the oranges.

Waqatabu was quick to make up for his sinbinning when Fiji scored at the start of the second half to draw the game level. But Country bounced back just as fast, forcing mistakes repeatedly in the Fijian scrum, which led to Mosese Ducivaki being sent to the bin in the 55th minute. Country couldn’t convert the advantage, and the score stayed 12-12.

However, there was no denying them five minutes later when Teti Tela when over in the corner to put country up by five. However, as the final twenty minutes began to play out, both sides began to tire. And it was Fiji who looked to be handling it the best. In the 68th minute the Drua headed pulled off an outstanding coast-to-coast try to have the Lautoka crowd dancing on the hill. It was going to go down to the wire.

But the try seemed to stir up the last ounces of energy in the Country side, when Eto Nabuli crashed over in the final minutes. James Tuttle’s conversion saw Country have a seven point lead. And in the end, with the Drua attacking, it was resolute defence that won Country the match, with the Drua being held up over the line to end the game and their chances of salvaging a late draw.

This was a crucial moment for the Drua. A win here would’ve guaranteed them a home semi-final. However, it could also prove to be crucial in their entire campaign. With several fast finishing teams in the mix, particularly the Country Eagles and Brisbane City, they will need to put up a big showing next week against the Sydney Rays if they are to consolidate their current position on the ladder.

With this match, Country stamped their claim for the Toast Rack. They make the Drua their own worst enemy, forcing mistakes and capitalising. It was an outstanding performance, that was capped off by them taking the Horan-Little Shield for the first time. They face a desperate Perth Spirit side next week in a match that will decide whether they finish first or second on the ladder.

The small mistakes that the Drua made were so costly, it trashed any momentum they were building up. They need to work out their discipline, and fast.

It was a great showing by all concerned for the Country Boys, but for me it has to go to the double try-scorer who had an absolute blinder, Caleb Timu.

Dare I say it, but the combination of Hamish Stewart and flyhalf Teti Tela has got some serious potential. Really hope to see those two playing side-by-side in Reds colours soon.