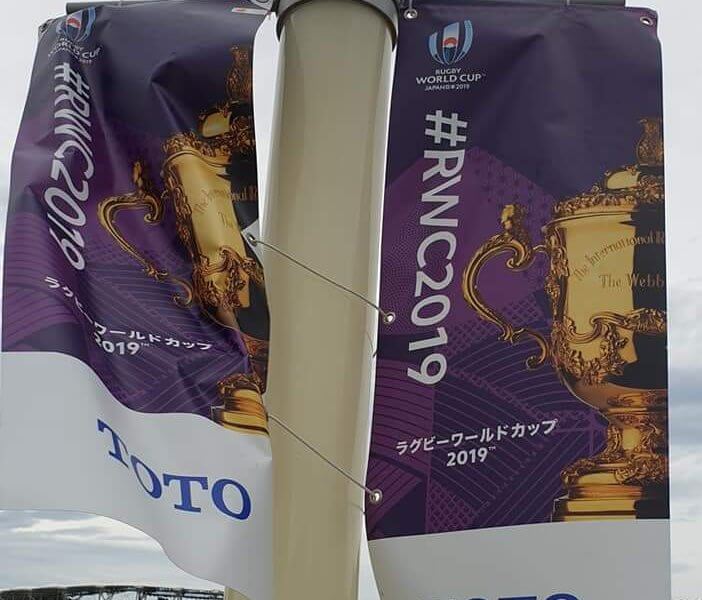 Well, Aino actually, but let’s not let a little thing like an hour train ride get in the way.

This week’s edition also comes to you from the out skirts of Typhoon Hagibis. That ruddy great storm that cancelled the England vs France and New Zealand vs Italy games. Toto, we are most certainly NOT in Kansas. 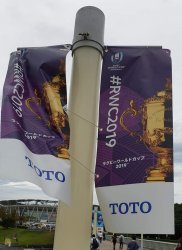 As you can imagine, chaos reined supreme at Shizuoka Station as people arrived to find that during their journey from where ever they were coming from all trains for the 12th pretty much anywhere on the east coast of Japan were being cancelled. This meant that if you were flying out of Tokyo, or at least intending to fly out of Tokyo, either the 12th or 13th you had a few hours to try and get there. Not sure anyone will be flying anywhere however.

There were a lot of game tickets for sale on the platform. And I thought that the crowd might have been a little disappointing but there was a touch over 39,000 in the end so the atmosphere was rocking. As it always seems to be at the games here.

As I got my pool tickets through the ballot, I have ended up sitting amongst the locals which has been great. I have been given many snacks, only some of which I have had any idea what they were. And the comradery has always been great no matter which team they were supporting. Some households just took a bet each way. 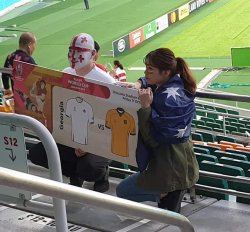 Does it matter who wins?

Random thoughts from the game:

The “storm” was always going to make life difficult for both teams. Knock-ons, lost forwards, strips, drops etc became very repetitive. Was it just me or did the referee give up on running an advantage for said offences and just started pulling them up straight away?

When Beale was knocked out for the count things could have got ugly. He at least walked off, with assistance, unlike Gela Aprasidze (Georgia 9) who got laid out by friendly fire later in the game. After the Beale incident there was a rousing round of applause. I am not sure if this was for him sitting up or for the referee choosing not to go to the cards for the Georgian who appeared to dive on his head.

Speaking of Georgians, there are some gnarled old heads in that forward pack. Talk about only a mother loving!

And speaking of cards, was anyone else confused when Isi only got a yellow? Or did I miss something? I really miss being able to eavesdrop on the referees as they deliberate.

Congrats to simmo of his 100th test cap. I seriously never thought I would say that. Then he started playing at the Tahs……. *Insert fishing emoji here.

And last but not least, I think I am in love. This is the best pic I think I have seen from the night. I would probably have the same look on my face as that little boy if I were to shake Poey’s hand. Unlike last time where he frightened the living crap out of me in Canberra. 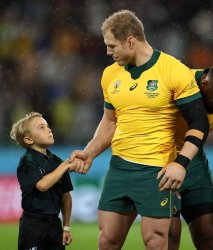 That is all for this week. Onwards to the quarter finals, and back to Oita. I will now retire to the hotel foyer beer vending machine for supplies to wait out the fury of Hagibis. Fingers crossed the trains are running tomorrow….