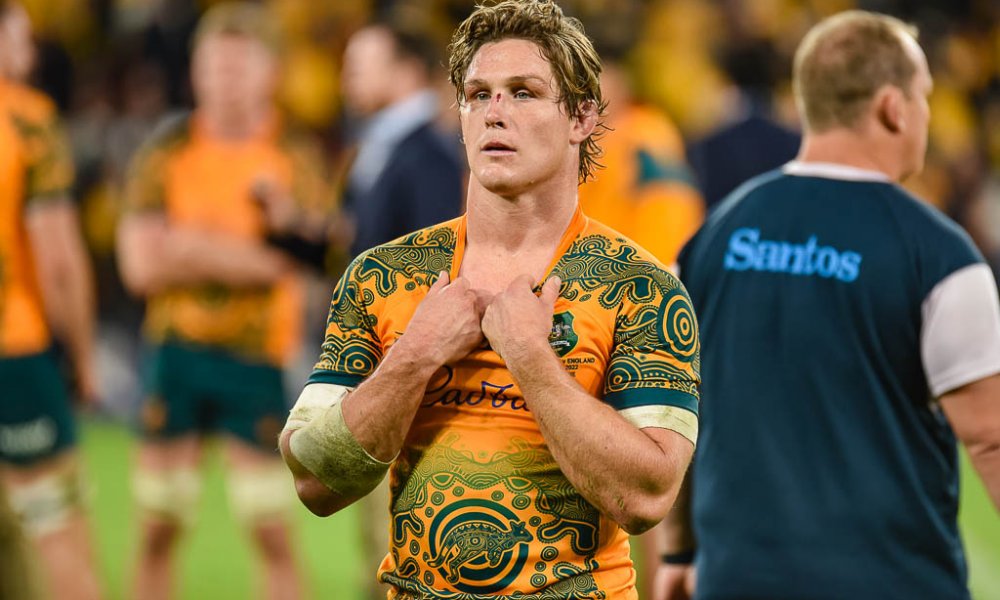 “In Affectionate Remembrance of Australia’s Fortress of Suncorp, which died in Brizvegas on the 9th July 2022. Deeply lamented by a large circle of sorrowing friends and acquaintances. RIP. NB —the body will be cremated and the ashes taken to England.”

Well, friends, what a dramatic turnaround from the weekend previous to this. Not only are 90% of the G&GR writers recovering from an alcohol-induced illness (probably prohibiting them from any work or articles this week!), but they are feeling the effects of a Wallabies pasting from the Auld Foe (except Keith, who, in his excitement, allegedly bought a few beverages for other people!). Now me, apart from sore legs from a Prem 1 game here in Vic (check out the Rugby Vic page for my game…), I’m dandy!

Australia v England – The Wallabies lost this in two distinct periods, albeit in two differing lengths of time. Firstly, the men in orange gold were pummelled in the first twenty minutes. I don’t recall any sustained period of possession in this time, let alone any quality ball in hand. Coupled with the ineffectual nature of the players, particularly Hooper and Tupou, the Wallabies pack found it difficult to get into the game. The second period of time was between JOC’s kick out on the full and his failure to kick into touch, mixed in with FF’s failure to throw straight. Simply, many of the impact players, especially those whom we’d consider to be experienced, made, well, no impact or worse!

Now, there were still positive signs. Matt Philip stole at least three lineouts, Lolesio looked better than he has done before, particularly when playing flat, and Kerevi continues to impress with the additions to his game learned from Japan. Somehow, the Wallabies were able to bring themselves back within touching distance before having players shoot the Wallaby emblem in the tail to give the momentum back to the SDs to finish the game.

With an injury toll building to about another starting XV by itself, the Wallabies under Rennie did well not to completely collapse. Indeed, credit where it’s due to Tom Wright, who started and finished the match at wing with a decent period spent at fullback after the HIA failure of Jordan Petaia. Was his game perfect? No. But gee whiz he earned some brownie points (and was lucky not to be penalised for ‘not releasing the tackled player’ at the end of his run and chip from the 22m line). Further injuries, some potentially season-ending injuries for Neville (knee) and Perese (patella tendon rupture), as well as a question mark for Sio (shoulder), clouded the evening further for the G&GR fans.

A starting Wallabies side for me (albeit a bit of a fantasy with some selections) next week looks like: Bell, Porecki, 7As (if fit), Philip, Frost, Valetini, Hooper (coz he won’t be dropped), Wilson, Gordon, Lolesio, Wright, Kerevi, Ikitau (if fit), Koroibete, Hodge (I know, I know…). The pine has some work to do as well: Lonergan, Tupou, Slipper, Salakai-Loto, Leota, White, JOC, Vunivalu (coz they’ll pick him). Lucky that DR has some depth to most positions or we’d be in big(ger) trouble.

New Zealand v Ireland – The Kiwis have lost to the Irish for the first time in New Zealand, thus renewing the blade-sharpening that could well lead to a coaching execution if the result was to be the same next weekend. The Kiwi press were as ruthless as the English would be on a bad day, and Clive Woodward on a good one! Now, KARL will cover a certain point of law on Wednesday so you can all keep your knickers firmly unknotted (or knotted if you like that sort of thing…) until then. I must admit that I thought the Kiwi rush defence, as well as their utilisation of limited resources, to be very good. In contrast, I felt the Irish shit the bed more than ScoMo did at Engadine Maccas when playing against a side down men. Too often they looked to spread the ball wide rather than engage the defence to drag the players in. Their patience was simply not good and, if anything, they seemed to panic with a numerical advantage. Alas, all’s well that ends well and the Irish got up after sorting their proverbial shit out.

South Africa v Wales – Wales made history in Bloemfontein with a late Josh Adams try and Gareth Anscombe conversion securing their first ever victory in South Africa over the Springboks by 13-12. Wayne Pivac’s men had been cruelly denied in the first test when a last-gasp Damian Willemse penalty broke their hearts, but they finally got one over the Springboks in the Rainbow Nation. Wales looked dead and buried at one stage and it looked as though South Africa’s physicality might just have taken its toll on the men in red. But, they refused to throw in the towel and their patience paid off when prolific try scorer Adams sneaked in at the corner with a mere two minutes remaining. The game wasn’t won as Wales still had to knock over a touchline conversion. Anscombe stepped up with the weight of a proud rugby nation on his shoulders, but despite South Africa’s frantic attempts to charge him down the Ospreys man came up trumps to secure a memorable day for the Northern Hemisphere after Ireland and England’s victories over New Zealand and Australia, respectively. “Do you know what after last week we spoke about the disappointment and hurt we felt to lose in the way we did right at the end,” said Wales wing Adams.  “We said if we can bottle the hurt and disappointment up as a team then it can be used effectively. I think it showed the character of the team the way we came back. There was a bit of a slump there and we were 12-6 down but we came back to win it. I think it speaks volumes of this team.

Scotland levelled their three-match Test series against Argentina with a commanding 29-6 victory in Salta, ending the Clown’s honeymoon period after one match (LOL!). Hamish Watson, Mark Bennett, Matt Fagerson and Sam Johnson scored tries as Gregor Townsend’s side bounced back from their first test defeat in style. Blair Kinghorn and Ross Thompson contributed nine points with the boot as a home crowd that had celebrated Independence Day in Argentina before kick-off and were in party mood fell silent. Grant Gilchrist paid tribute to Scotland’s performance after taking the series to the final game next weekend. The captain told Sky Sports: “I’m really proud of the boys. We bounced back from last week, but we came here to win a series and we won’t get ahead of ourselves.

Australia A could be set for more matches later in the year, with RA looking into whether more fixtures can be squeezed into the calendar.

Without the National Rugby Championship, a third tier of rugby is important for not only the development of players but to keep them active in case they’re called up for Wallabies duty. A case in point was Reece Hodge, who was flown back to Australia to join Wallabies camp after playing for Australia A in their loss to Samoa at the weekend.

The matches would be against international opposition but it’s unlikely they’ll be on Australian soil.

Former Australian International Referee Andrew Cole passed away on Saturday morning after a short illness. Andrew refereed at two RWCs, including the 2003 RWC in Australia. He was influential in many referees’ careers here in Australia and we are poorer for his passing.

Righto, G&GRS. That’s me done for now. I daresay there’ll be the usual late Monday morning news items to chew the fat over as well.