High expectations for Brumbies in 2010!

High expectations for Brumbies in 2010!

I have heard the Brumbies of 2010 described as the Chelsea Football Club of Australian Rugby.  Now, I don’t follow European football, but can hazard a guess that Chelsea is renowned for purchasing their highly successful team? For creating a winning team from the cheque book up? Personally I think this is damn hard on the Brumbies.

Unless there is something I don’t know about I figure the cheque book has rarely, if ever, been the inducement to get a player to the Brumbies.  We all know the story of how they began. How Rod McQueen built a team based on the same principals of the quote that adorns the Statue of Liberty:

“”Give me your tired, your poor,
Your huddled masses yearning to breathe free,
The wretched refuse of your teeming shore.
Send these, the homeless, tempest-tost to me,
I lift my lamp beside the golden door!”

Well, ok, it wasn’t THAT extreme. But the initial squad was based around a number of players out to make a name for themselves, that possibly weren’t getting their opportunities elsewhere. Players like Pat Howard, David Knox, Owen Finegan, David Giffen, Brett Robinson.  And these were the core of players, along with locals such as George Gregan and Joe Roff, who would form the nucleus of a side that stand alone as the premier Australian provincial side of the professional era. 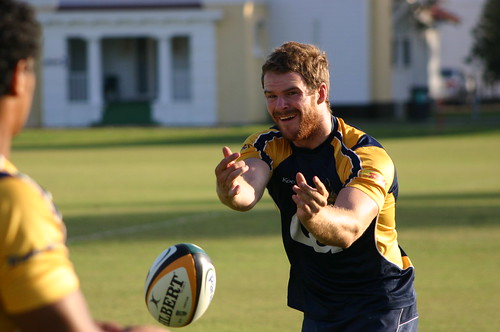 For it is the signings of Giteau and Elsom that the Brumbies have seemingly earned their nickname of the ‘Chelsea of the South’. But the labelling is unfair and overlooks  the likes of those other players mentioned above.  It sees names like George Smith, Chisholm, Mortlock, Ashley-Cooper alongside Gits and Rocky and automatically creates the stigma of check book rugby.

But to look at the wider squad is to see where these players have come from and what the Brumbies create within their organisation.  There are seven new players (new this year) to the Brumbies for the 2010 season. This includes Justin Harrison, a former Brumby, who was signed late as cover for the injured Peter Kimlin.

It is a fascinating squad the Brumbies have.  A reduced number of 29 seems to be a sign of the economic times, as teams reduce squad sizes to save on the financial squeeze of having contracted players pretty much being glorified tackle bag holders.  On paper, there could be question marks as to the depth of the Brumbies in some positions, but once again this brings to light why this team is so good. 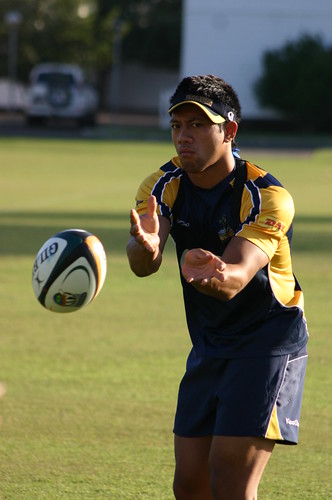 Lealiifano – to pull the reverse Larkham?

Their ability to bring in replacement players, who can step into the fold so comfortably is well known.  A couple of years ago they had a centre problem of some note, and had to call on Sydney club player Leo Afeaki. He looked like a bloody test player during his time on the field. And where is he know? Back in club land, but the organisation has this ability to call in these players, and support them in their performances, empowering them to step up and play well.

This factor may well be called into question early on in the season. With Adam Ashley-Cooper the likely frontrunner for the fullback jersey, as the Wallaby incumbent, cover for the spot comes from rookies Pat McCabe and Andrew Smith. Or will it?  There has been some suggestion that young flyhalf Christian Lealiifano may spend some time at the back with the arrival of Giteau and the emergence of Toomua.

On the flank, they’re built for speed. As per most Brumby backlines, the utility value of the players is considerable so the likes of Ashley-Cooper, Mortlock and Tyrone Smith may all spend some time on the wing. However the true speedsters Alfi Mafi and Francis Fainifo should have the front running come the start of the season.  The opportunity is there for Fainifo too. He won admirers last year. Another consistent season, showing the same abilities in ’10, and Wallaby honours could be close.

The former schoolboy sensation  Afusipa Taumoepeau is another wing option.  Now I acknowledge he’s young, having only just turned 20, but I’d like to see ‘zippa’ show a bit more of his potential this year.  Some good pre-season form could see him snag a wing jersey, whilst he can also cover the outside centre spot. He showed some glimpses last year, and he hasn’t been rushed in, but now’s the time for him to step up and show his wares.

No need to do any of that in the centres where Tyrone Smith and Stirling Mortlock rule the roost.  But do they?  What coach Andy Friend does with Giteau will determine what happens to Smith.  And Mortlock? Well who knows.  He’s back training, after a calf injury ruled him out of the Wallaby’s European tour, and injuries are becoming, worryingly, more prominent.  I’d be surprised Mortlock will play every game. In fact I’d be surprised if he plays more than two thirds of them in what could very well be his farewell year.  So the utility value of the likes of Ashley-Cooper, Taumoepeau, Smith and McCabe become an important factor.

And then there’s Gits.  Matt Giteau. Where to play him? Will he be at 12 mentoring the young Lealiifano or Matt Toomua? Or will he be at 10, where he plays for the Wallabies, and was so dominant for the Force, directing his talent laden backline around? Personally, I think he’s got to be at 10. A dominant flyhalf is crucial for a championship team (07 RWC aside) and Giteau IS the best flyhalf in Australia. At provincial level at least.

Giteau’s Force half partner, Josh Valentine, will start favorite for the number 9 jersey, but will battle with the experienced Patrick Phibbs.  Phibbs had a good game last year. I seem to remember it.  Valentine’s crisp pass and quality kicking game should secure him the position though, as long as the attitude is suitably adjusted.

Moving into the pack. An area the Brumbies have historically copped some criticism. The suggestion seems to be that they play too loose, without a real set piece focus.  I’m not really convinced this was ever the case.  They have produced some of Australia’s best front rowers in the likes of Bill Young, Ben Alexander and Jeremy Paul.  Although it’s fair to say that the likes of Paul, Owen Finegan and George Smith spent their fair amount of minutes hovering around the ‘glory boys’ out wide.

From the get go we have exactly one of those players in skipper Stephen Hoiles. Hoiles is a superbly talented backrower, who likes to have the ball in his hands as much as he can.  Whilst he’s a lineout asset as well, the effectiveness of his work in tight has been called to question.  But this shouldn’t be an issue this year, particularly when you have a couple of guys by the name of Rocky Elsom and George Smith beside you.  Is there a more mobile and gifted backrow combination in the Super 14 competition? I think not. Interestingly, you have two Wallaby captains there as well, yet Hoiles has been reappointed Brumby skipper.

Young Jack Vanderglas is there this year as well, on a rookie contract. Having seen him play a bit of 7s for the Aussies, I can say he’s a bit of a goer. I look forward to seeing him get some more game time with the Brumbies this year, particularly as he is a local boy who has come through the system.

As additional backrow support there is Mitchell Chapman and Peter Kimlin. Both are recent Wallaby tourists, both are lock slash backrowers and both are physical players with some pretty handy skills around the park. Unfortunately for Kimlin, his 2010 season looks doubtful at this stage, thanks to a shoulder injury sustained on the Brumbies end of season tour last year.

Kimlin’s injury has seen the return of a long time Brumby favourite, Justin Harrison.  Googy has just finished serving an 8-month suspension from rugby for drug related charges and it will be fascinating to see what role he plays this year.  There is certainly a dearth of quality Australian locks around at the moment and Harrison is certainly an Australian lock. As to his quality? Let’s wait and see on that one shall we?

Alongside Harrison this year will be three of the same from last year.  Mark Chisholm, who had somewhat of a Wallaby resurgence and then demise in 2009, Ben Hand, who was solid and did all he was expected to do last year, and Sitaleki Timani, who is a monster of a man but is yet to showcase any sign of his abilities on the field.

To the front row, where the Brumbies have impressive depth.  How they play it out will be interesting.  Ben Alexander is now the premier Tight Head Prop in Australia, being one of the standout Wallabies in 2009.  But will he be the Brumby number 3? With specialist Tight Head’s Guy Shepherdson (a former Wallaby) and Salesi Ma’afu (a Wallaby tourist) also in the squad, who fills in the Loose Head Prop spot? Surely it has to be Alexander? Or perhaps will Ma’afu or Shepherdson be switched across? With Alexander out for at least the first two rounds of the comp with a hand injury, the options are limited.

John Ulugia has been called back into the squad as cover for Alexander, despite being used largely as a backup hooker previously.  The other full time prop in the squad is mystery man Jerry Yanuyanutawa, who is also injured. Jerry is a loosehead prop, but seems at least a year or two away from Super Rugby preparedness. His reputation in the loose (there’s that word again) does precede him however.

Ulugia will provide some handy cover at hooker as well. The Brumbies have just the two hookers, on a full time contract, in Stephen Moore and Huia Edmonds.  Moore is still the best hooker in Australia and, along with Elsom and Smith, provides experience and leadership to the pack. Edmonds is an able back up, and probably surpassed expectations in this role last year from which he was rewarded with a new two-year contract.

The draw for the Brumbies doesn’t look too shabby. They start off with a South African road trip, but only after playing the Force in Perth first, so there’s no chance of getting to the republic early.  The first home game is against the Lions in March, however the Lions are just travelling over the pond having taken on the Canes, whilst the Brumbies will be returning from Cape Town and an encounter with the Stormers. It’s a tough start, with a match against the Bulls as well, especially considering they will be without some front row depth.

There’s not much travelling in the 2nd part of the season however, which could prove invaluable for a finals run home.  It is Lions at home, then Sharks at home, across to Auckland for the Blues, before coming back for the Chiefs. After the bye the Brumbies stay in Canberra for matches against the Cheetahs and Hurricanes, before the local derby (at ANZ Stadium mind you) against the Tahs, before they return again to demolish the Reds.  The last home game is against the Highlanders in Round 13, before finishing with a cracker against the Crusaders in  Christchurch. 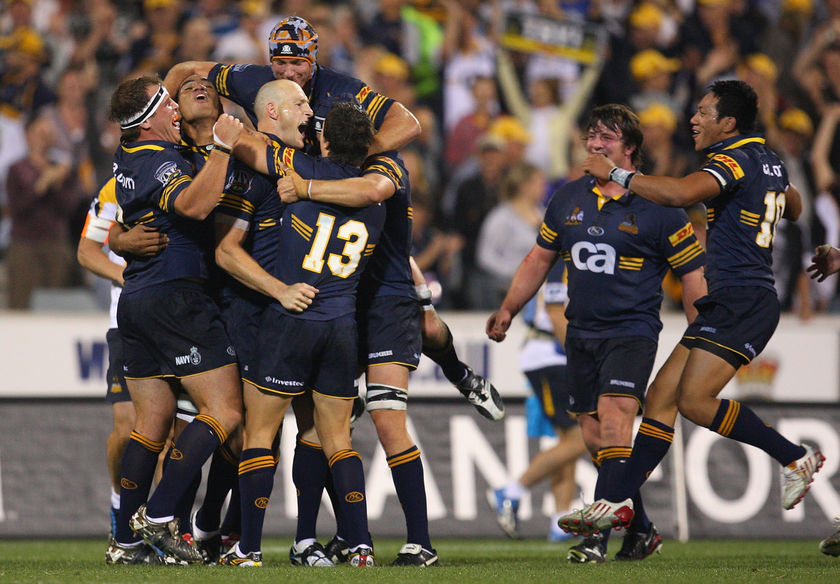 Expect plenty of Brumby celebrations in 2010!

A strong start to the season, using the siege mentality they thrive on, will be crucial for the Brumbies. If they can get through that with a couple of wins (Force and Stormers) and a bonus point or two, they will have set themselves up to make every post a winner for the rest of the season.