Last night’s episode of Four Corners dealt with Chronic Traumatic Encephalopathy (CTE) and how it relates to sub-concussive forces (those forces that aren’t enough to induce concussion symptoms, but which can induce ongoing and long-term damage). This is a huge topic that could be looked at in so many different ways, which I plan to do. But I’ve started with Life in Clubland because it’s what I know and it’s therefore less likely to get me sued…

There are two points I’d like to make first:

The show made the point that sub-concussive forces to the head have been shown to potentially induce damage that leads to CTE. 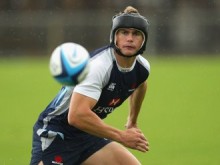 That there is even potential for this should be enough to make us all sit up and take notice: the effects on every single rugby player are potentially catastrophic. But the sub-concussive forces in high-school and recreational athletes the program referred to were in linemen in gridiron, who use their heads as battering rams and sustain “25G forces over and over again, upwards of 1000 to 1500 times per year”. The magnitude of force and number of these collisions has no correlate in rugby union, at any level.

While I agree that more research is needed on head injuries in all sports, especially a sport I love so much as rugby union, the link made between sub-concussive forces and rugby union was very weak. The link between real concussive events in rugby is, in contrast, very strong.

The ARU: Education, not enforcement

I think the ARU’s policy of educating people about head injuries (rather than enforcing compulsory time off) is bang on. In any media discussion around head injuries in contact sport there is often an insinuation that medical staff won’t diagnose a player with a concussion because they want to keep them on the field at all costs. Please, on behalf of people who assume a degree of medical responsibility for our players, understand that we feel like part of the team. We belong in the dressing sheds, we belong at the club nights, we belong on the field. The players are our teammates too, they are like family to us. We would never do anything that could hurt them, and we will do everything in our power to protect them from harm.

As a trainer/physio/medic/faith healer/whatever, you need to develop a level of trust with your team so that they’ll tell you when they’re injured.  You also need to learn how they normally talk when they’re on field (often this bears little resemblance to their off-field communication skills), how they run, how they go into contact, how aggressive they normally are, how they position themselves around the field, how they get up off the ground. Because players often don’t realise they’re concussed (and if they do, they don’t want to come off) if any of those things are unusual, then there could be something wrong. And generally, by the time these unusual behaviours are visible, the player is concussed.

The problem with enforcing mandatory periods out of the game is that it hugely increases the likelihood of players not telling the medical staff they’ve had a head knock, or that one of their teammates doesn’t seem right. I can vividly remember the bad-old-days not that long ago where you could see someone being led from the field, clearly in la-la land, and then hear in the post-match presser about his “ankle” problem that he left the field with (but he should be back next week…).

There’s been a very welcome culture shift at my club over the past two years where, for example, our inside centre tells us “can you check Smithy (every team has a Smithy) he copped a head knock in the last tackle”. If they think that by telling me these things that they’re making their teammate miss three weeks of games, they will hide it. Dazed players will avoid medical staff. It’s only by educating players, coaches and managers, increasing the awareness of why concussion is such a big deal, while at the same time removing the mandated time away from the game, that players start saying when something is wrong.

The IRB Regulations are unequivocal on one thing: that every single player who is suspected of having concussion, or diagnosed as having concussion, goes through a graduated return to play protocol (GRTP). Here is a link to it. There are no compulsory weeks off in open rugby, although they do recommend being very conservative with kids*, and at each and every step you are advised to seek medical advice. But in the total absence of qualified medical advice, there is a flow-chart, that is very easy to follow, of GRTP. This recognises that some head injuries take longer than three weeks to heal, while some resolve themselves very quickly.

Something for the suggestion box

In rugby union, if someone has blood, you have 15 minutes (of actual time, not playing time) to stop the bleeding and clean it up. But if you suspect, but aren’t sure, someone has a head injury, there is no time allowed for you to take him or her from the field and have a better look: once a player has been taken from the field and replaced without it being a blood-bin, generally speaking, they cannot return to play (although there are competition-specific rules).

So the medical staff need to assess, in the minute or two after a try has been scored, or while there is a short break in play, whether a player has symptoms of a concussion knowing that once they leave the field, they can’t come back on. If a blood-bin-like policy for assessing head injuries was implemented, then the trainer or doctor could assess the player away from the machismo, adrenalin, noise, and rapidly approaching herd of big people. And the player would know that they weren’t going to be letting down their mates by “being soft”.

We’re dealing with people’s lives here. The ARU and IRB have got it right, but it’s up to every one of us to know and follow the regulations laid out, and to educate clubs and people as to why these regulations are there.  What are your thoughts?

*The IRB Rules from 2010 state that age-grouped players have a compulsory three weeks out, but the guidelines I’m referring to are from February 2012. I’ve chosen the more recent guidelines, but please check with your local competition.