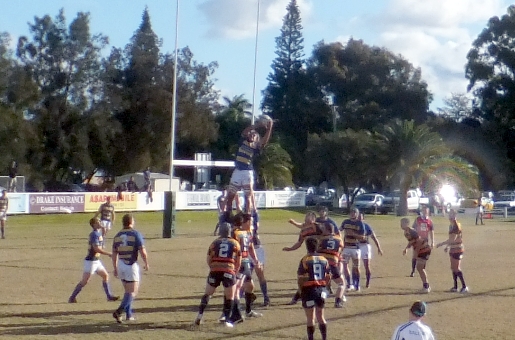 If You Come, They Will Build It.

As we walked into Albert Park on a beautiful Winter’s afternoon, the talk was not on who would win but on by how much. The consensus was Easts, by a lot! We bought some of the great burgers that Surfers Paradise Rugby make, found a spot and settled in to watch a walkover. But that’s not what we got!

It was clear from the opening seconds that this was not the Breakers side we have seen for the last few weeks. These players were fired up, talking to each other, yelling for holes to be filled in defence and had clear patterns to work to in attack. Sure, Easts had all that too, but I was thinking ‘if the Breakers can keep this up we’re in for a great game of rugby’.

The game was willing with both teams making mini-breaks. One of these saw Easts on the Goal Coast’s goal line but somehow the home team turned the ball over and saved the try. They set up a ruck in front of their posts and unfortunately the pass for the clearing kick dribbled along the floor. Easts dived on the ball to score and easily converted to lead 7–0.

The Gold Coast side hit back with the try of the afternoon. From set play on the half way line five-eighth Cayden Matehaere threw a beautiful long pass to outside centre Liam MacGeachy, who was already hitting the gap. He burst open Easts’ midfield, drawing defenders from all quarters, and threw another long pass to winger Tim Hindmarsh, who was already outside his man and scooted into the corner to score. It really was pretty to watch. Matehaere converted to level the scores.

For about the first half hour of the game both teams played great rugby but the last 10 or so minutes of the half were all Easts. They piled on 17 unanswered points with a great team try to put winger Chris Mansel over in the corner. A second converted try came from counter-attack off a poor Breakers chip kick. To top it off, Gold Coast infringed at the breakdown in front of their posts on the stroke of half time. The penalty goal made it  24–7.

The set piece was hard-fought all day

I don’t know what was said in the Gold Coast huddle at half time but the team came out after drinks and played like men possessed. Tiny halfback Tepou Nipurahi controlled the game completely for the next 40 minutes. He either has no fear or is completely crazy. He constantly took on much bigger men with no hesitation with his snipes around the rucks, mixing it with great service to his backs. He’s a player worth watching again, I’m sure.

Gold Coast were straight on attack after the kick-off and won a penalty near the posts and five out. Nipurahi instantly took the tap and put Winiata Barrett over next to the posts. The conversion took the score to 24–12.

Shortly afterwards the Gold Coasts were camped in Easts’ quarter and put a man over in the left corner, making it 24–19 with the conversion.

The Breakers forwards were making lots of metres around the ruck but Easts weren’t done yet. Centre Toby White cut through the Gold Coast’s midfield like a shark through a school of fish and headed for the try line, falling just short. The Breakers won the penalty to save the try but didn’t release the ball in the first ruck after the resulting lineout. Uj Seuteni continued his kicking master class to increase the buffer to 27–19.

And then the Breakers hit back. I didn’t catch who threw the pass to put winger Hayden Julius in, but it was beautifully weighted and Hayden ran a nice line to completely beat his opposition. He ran around to make the kick easier and the conversion brought the score to 27–26 with 8 minutes to go.

At this point I wrote one word in my notes: Patience!!! But the Breakers could sense an upset and pushed hard — too hard. They had plenty of possession and were playing all the rugby, with Easts simply holding on. But they were losing lots of possession too. They had a few chances to win, the best of which saw Hayden Julius (I think) in front in a race for the ball, only to be pushed in the back — a fact missed by the referees.

And that’s how the game ended. Easts must have been relieved to walk away with the win while the Gold Coast side, while disappointed with the loss, should be very happy with the way they played.

All in all, another great afternoon of #3rdtier action.

Souths play the Sunshine Coast at Chipsy Wood Oval on Tuesday, 10 July, at 20:20.

There are no matches next weekend due to the scheduled City v. Country match. Queensland Premier Rugby returns on 21 July 2012

The Ladder after round 11


Join the conversation in this forum thread — we’d love your input. Give us your thoughts on the game you attended and we’ll put it in next week’s post. Remember your #3rdtier hashtag when tweeting the games, and check out the 3rdTier Facebook page.

And remember: If You Come, They Will Build It.