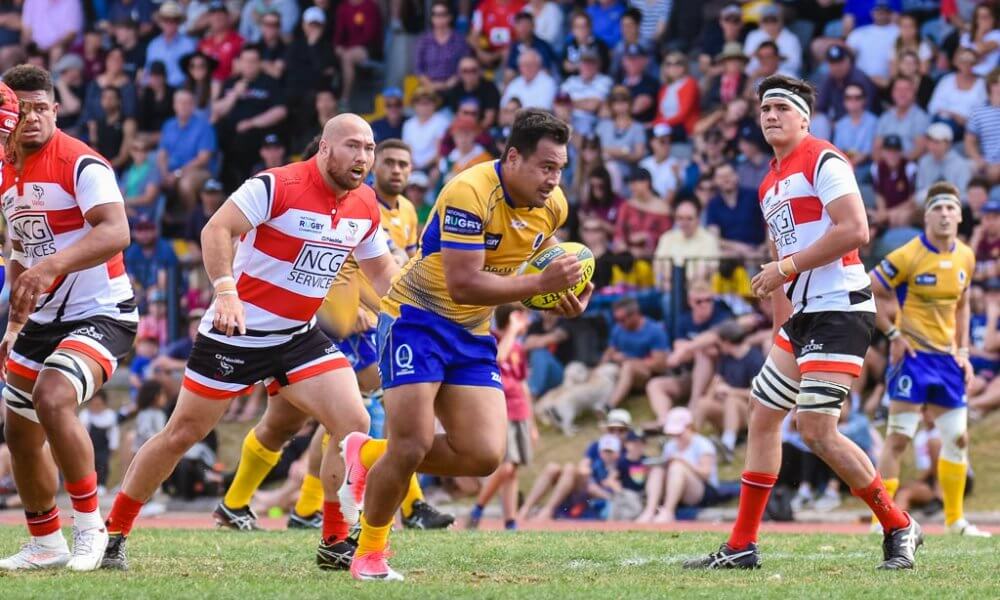 Friday’s Rugby News sees our thoughts on the penultimate round of Super Rugby, another dash of club corner, Gibson maybe getting another year and the latest NRC goss.

The ‘Pen’ in ultimate 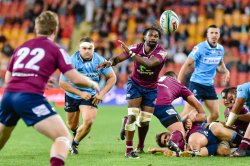 It’s the penultimate round, and based on the results go this weekend, we may actually have two (or maybe even three) teams in the playoffs. And that’s a miracle in itself.

Just to do some math here. If the Waratahs win this weekend and the Rebels lose, the Tahs are guaranteed top placing in the Aussie conference with a round to go.

The Rebels are (despite their up-and-down bonkers season), currently holding eighth place overall, the lowest spot in the playoffs. So, if they beat the Reds in Brisvegas this weekend (and the chasing pack in the Sharks, Brumbies and Bulls lose), they’ll be guaranteed a maiden finals berth.

And as for the Donkeys, they’ve just got to win every single bloody game and hope that the Jaguares and Highlanders have a extreme sudden slip in form.

But I digress. Onto the matches.

The Reds are now playing for pride and will look to deny the Rebels their maiden finals berth when they host them on Friday night. The Victorian side have (potentially) a lot to lose if they drop this game, as they’ll face the Highlanders in NZ next weekend.

The Reds have lost Samu Kerevi for up to 12-16 weeks with a ruptured bicep, but get back Izack Rodda from a shoulder injury.

The Stockade on the other hand will get back Marika Koroibete and Tetera Faulkner from injury, with Colby Fainga’a set to start his 100th game of Super Rugby.

It’s been a weird season for both sides, but the Reds would love to take down the Rebels, and have achieved three of their four wins this year at home. But they are five down on the trot. The Rebels, meanwhile have had (until last week against the Tahs) a good late charge to the playoffs, with a win at home and two away wins (one in NZ). Win, and they could potentially be in their maiden finals berth. It’s now or never for them. I’m backing the Stockade for this one. Rebels by 7.

Next up, the Brumbies face the toughest run to the finals of all when they face the Chiefs in Hamilton.

The Ponies have come off a surprise win against the Hurricanes in Canberra last week, and are currently on a three match winning streak. They arrive in the North Island to face a team that thumped the Highlanders in Suva. But, it’s a new week, and the Chiefs will have a point to prove to their fans.

Dan McKellar has stuck with the same side as last week, which could either go really well or go really badly. I dunno. It’s been a weird season for all Brumby supporters. Up until last week, we were having a shocker. Suddenly, we beat a Kiwi side and (somehow) were still a shot for making the finals. Rugby is a strange game.

Last up, the Waratahs will also look to wrap up their place at the top of the table with a win against the Sunwolves in Sydney.

There is only one change to the starting lineup with Israel Folau coming off suspension to come into the fullback position, and Bryce Hegarty dropping to the bench.

The Tahs are hot favourites to win this one, but it would be foolish to fully disregard the Moon Dogs. The Bulls did that last weekend, and they lost. So did the Reds earlier this year.

The other matches this weekend see the South Island derby when the Crusaders host the Highlanders, the Hurricanes host the Blues, the Bulls will have their last throw of the dice for the finals when they host the Jags, and the Stormers will host a Sharks outfit that is only three points away from the top eight.

It’s crunch time. Over to you GAGRs. 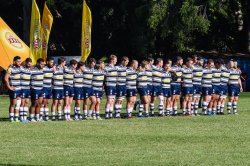 While the Super Rugby is nearing it’s conclusion, the club rugby season is still very much kicking on.

Starting in Sydney, Round Twelve of the Intrust Super Shute Shield saw Gordon go down to Randwick in Chatswood 24-38, West Harbour went down to Eastern Suburbs 24-46, Manly grabbed an important win over the Students 24-22, Parramatta got thumped 14-52 by Warringah, and Eastwood came home strong against Northern Suburbs in Cowra, winning 29-22.

Next up, we head north to the Hospital Challenge Cup is Brisbane. Round Fourteen saw Sunnybank lose 10-38 to Easts, Bond University picked up a vital 19-12 win over Brothers, GPS hammered Norths 52-14, and Souths defeated Wests 26-0.

Easts will have the bye.

Down in Canberra, Round Thirteen of the John I Dent Cup saw Royals hammer Easts 33-7, Tuggeranong beat Queanbeyan 34-17, and Gungahlin grabbed an away win against Wests, 5-29.

Round Nine of the Coopers Premier Grade in Adelaide saw Burnside thump Onkaparinga 57-19, Brighton knock over Souths 21-10, and defence go out the window in the Woodville-Old Collegians match, with the away side prevailing 25-81.

In Melbourne, Round Ten of the Dewar Shield saw Endeavour Hills go down 5-39 to Moorabbin, Footscray went down 19-45 to Melbourne Uni, Harlequins hammered Box Hill off the park 78-7, and Melbourne did exactly the same to Power House, winning 53-17.

And last (but certainly not least) in Perth, the Fortescue Metals Group Premier Grade competition entered into it’s penultimate round of the season last week. Round Twelve saw Kalamunda beat UWA 10-19,  the Cavaliers get monstered at home 22-55 by Wests Scarborough, ARKs went down 31-50 to Joondalup, Southern Lions grabbed a surprise 33-29 win over Nedlands, Wanneroo Districts defeated Associates 46-29, and Cottlesloe grabbed a vital away win against Perth Bayswater, 29-43.

In the final ladder results, we have a tie between Associates and Nedlands going into the final round (with 47 points a piece, with Cottlesloe not far behind on 43 points). Both teams going up against weaker opposition this weekend, so expect plenty of fireworks in the final dash for the trophy.

Wests Scarborough will have the bye.

A Ray of Sunshine for the West? 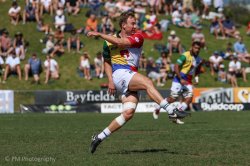 Angus Sinclair in action for the Rays

Well, it’s been an interesting week on the NRC front. It’s good to see this great little competition back for it’s fifth year and I really hope it continues to pick up more support.

The removal of the Rams has pissed off a lot of folks here in Sydney, (just ask Nick Pfitzner from our Dropped Kick-Off pod). Well, it looks as though the Sydney Rays seem to be all too aware of the fans annoyance, with the club extending and olive branching and announcing two games to played at Concord Oval.

Add to that, the Sydney Rays general manager Luke Holmes also wanted to emphasise that the Rays will be determined to make sure all of Sydney is represented in the newly aligned NRC clubs.

“I suppose Sydney’s west could feel like they have lost certain teams and different things this year, like the loss of Penrith in the Shute Shield, that’s not good for our game,” he said to rugby.com.au.

“I think the big thing here and the message we’re trying to send is that this is not a North Shore team, it’s not a team affiliated to certain clubs on the North shore.”

“Very much, it’s an all-Sydney team.”

According to Holmes, the Rays are already in talks with several players from West Harbour and Parramatta, including Pirates captain Kelly Meafua.

He also added that the focus for the club will be to try and replicate the success of Queensland’s sides in the NRC.

“If you look at the amount of guys that debuted for Brad Thorn this year, even though they haven’t had the best season, the talent that’s come out of that and the next generation of Wallabies, that’s off the back of the NRC and the success that they had last year.

“So, we’re really hoping we can provide that to the Waratahs next year and Australian rugby.”

The Rays will also be apparently adopting the Rams’ Pasifika round, with Pasifika men’s and women’s games set to be played before their home games.

“They’ll (home games) become real festivals of rugby, it’s about giving a platform for everyone to play on that big stage and to hopefully see some of those teams and their people and their community, being able to play on those days,” he said.

For many folks though in Sydney’s west, it’s a real case of believing it when they see it. Honestly, I don’t blame them.

In other NRC news, the Western Force have revealed a new indigenous jersey that they will be wearing when they play their next World Series Rugby game against Samoa. It’s actually a pretty cool little design, and part of me thinks ‘why don’t they actually wear this during the whole NRC campaign?’

That offer could also be extended to the Canberra Vikings, who should wear their Kookaburras heritage jersey from last year as their main strip. Shoot me down in flames, but that was a good bit of gear. 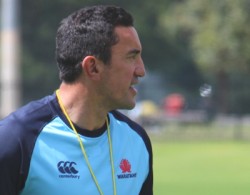 With Waratahs set to top off the Australian conference this weekend (if they beat the Sunwolves), thoughts have inevitably turned to what’s happening to the coaching panel at the end of the season.

At the start of this season, many folks in Sydney were calling for Daryl Gibson‘s head after two disappointing seasons at the helm and the second-worst winning record in Waratah history, at 40%.

This year however has seen an improvement for the men from NSW, with the club currently sitting on eight wins, one draw and five losses.

Questions have inevitably turned to whether Gibson will get an extension of his contract off the back of an improved year, and Tahs CEO Andrew Hore was saying that there a lot of ‘positive’ talks between Gibson and Tah HQ.

“The outcome is part of the overall discussions but there’s also, we’ve got to look at training methodology, team culture, performance criteria whether it’s been up and down and then come the outcomes,” he said to Rugby.com.au.

“There’s a raft of areas we’ve looked at.

“We’ve been in discussions with Daryl and things have progressed pretty positively.

“It seems that the things that were put in place to allow Daryl (to improve are showing) – he calls himself a lifelong learner and he’s definitely shown that he’s prepared to grow and develop.

“We had a whole series (of benchmarks) that were important in his game and we’ve kept track of those.

“There are general ones – he’s ultimately responsible for the performance of assistant coaches and folding into that as well.

“There’s been some pleasing movement there – there have been some disappointing blips but there’s been a lot of real positives as well.”

There has been talks however that he is given another year, there would be talk afterwards for a succession plan for Assistant Coaches Simon Cron and Chris Whitaker, the latter of which will be joining the Tahs next year.