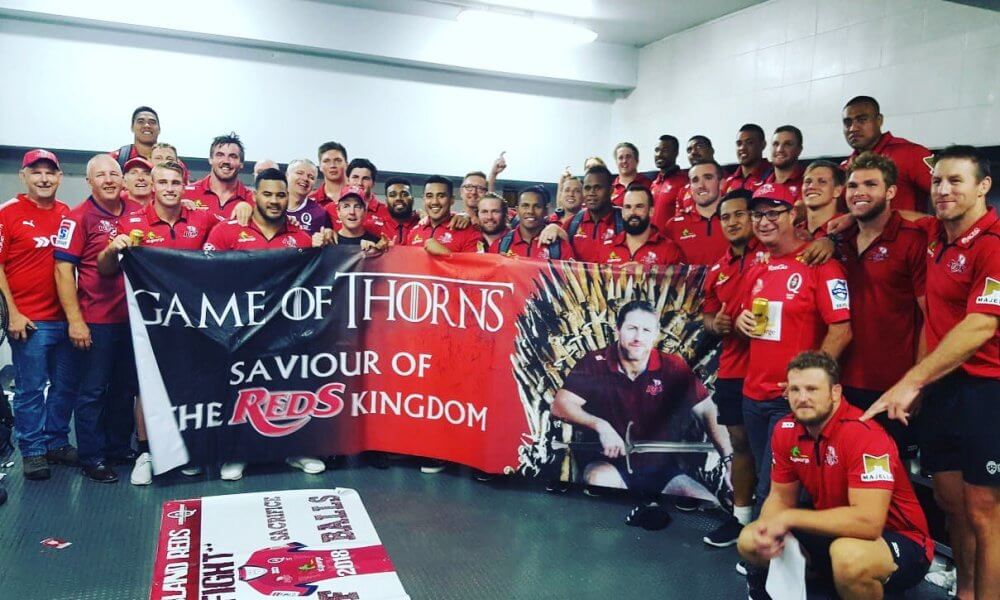 The Queensland Reds will be playing for pride and trying to avoid the wooden spoon. The Melbourne Rebels are desperate to reach the finals for the first time and need a win to sure up their chances.

Last week the Reds had a tough night at the office, in a game that was even tougher to watch, going down to the Blues 39-16 at a cold Eden Park. Before the test break, and following their humiliating loss against the Sunwolves, the Reds lost bravely to both the Hurricanes and Highlanders and also lost in a high scoring match against the Tahs at home. Queensland’s last win came in Round 11 against the Lions.

Should they lose again this week they will equal their club record of six consecutive losses, set last season. Currently they sit in 14th spot on the ladder, five points ahead of the Sunwolves.

A win last week would have almost guaranteed the Rebels a finals appearance and given them a genuine shot at topping the conference. Instead they found a way to lose to the Waratahs by giving up two trys from intercepted passes in the last quarter. In the weeks prior to the break, the Rebels were thrashed at home by the Crusaders and followed that with wins against the Sunwolves, Blues and Brumbies. A loss this week and win for the Sharks will see the Rebels drop from eighth to ninth and out of the finals. The Rebels have not yet beaten a team above them on the ladder.

In a big loss for the Reds, and the Wallabies, a ruptured bicep has ended Samu Kerevi’s season prematurely. Rising star, Jordan Petaia will take on the role of outside centre while Filipo Daugunu will get a start on the right wing. Izack Rodda returns to the second row with Harry Hockings dropping out of the 23. After ten NRC games and strong performances in club rugby, 27 year old flyhalf, Teti Tela has been named on the bench for a potential Super Rugby debut. Caleb Timu and Lukhan Tui have swapped numbers with Timu earning the start at openside flanker.

The Reds big weapon has been their scrum and they will no doubt look to use it to good effect again in this game. As we have seen though, a dominant scrum does not of its own make a winning team. The Reds Wallaby laden forward pack has not really delivered in general play. They have struggled to get an offload game going and have been unable to link with their backline effectively.

Coach, Brad Thorn has obviously placed an emphasis on defence this year however the Reds have conceeded 61 trys in their 14 games; only the Sunwolves have a worse record. Captain, Scott Higginbotham reiterrated the mantra during the week “We were way too passive with our tackling against the Blues a week ago so our defence has to be fired up with the line-speed to pressure Michael Ruru and those around him,” he said.

A tight defence is certainly important but, in attack, the Reds have the lowest number of trys scored in the competition, crossing the chalk on only 38 occassions. Seven of those trys came in a single game.

The harsh reality is that most (non-Kiwi) teams would struggle if their best attacking players were unavailable for the whole season.

Tetera Faulkner, Marika Koroibete, and Dickie Hardwick all return from injury this week. Faulkner and Koroibete will both start with Hardwick joining the bench. Jermaine Ainsley has been called into the starting side at the expense of Sam Talakai. Ben Daley, Lopeti Timani, and Semisi Tupou have all been ommitted. Adam Coleman has failed to recover from injury and will miss again.

The Rebels’ season to date has been a mixed bag. At times they have looked to be as good as any team, at other times they have completely fallen apart. Dave Wessells has said on several occassions that he wants the team to play “brave rugby” but there is a difference between brave and foolhardy. Last week against the Waratahs the Rebels literally threw the game away with two passes that didn’t need to be thrown intercepted late in the game. That shows a lack of composure and nous.

Two areas that the Rebels need to improve markedly is their discipline and one out tackling. The Rebels are the most penalised team in the competition, conceeding 157 penalties and eight yellow cards to date. They must stop making needless infringements – looking at you Amanaki Mafi, the most penalised man in Super Rugby. The Rebels also have the competition’s worst tackle success rate at only 82%. Whether this is due to poor technique or defensive structure is for the coaches to figure out but, missing tackles at crucial times is one of the main factors that has lead to some of the season’s worst blow outs.

If the Rebels can address these areas and play with pace and width they should win this game comfortably. If the pressure of the situation gets to them and they tighten up then another bad loss could be on the cards.

Special mention and congratulations to Colby Fainga’a, this will be his 100th Super Rugby match.

Tighthead prop, Tupou is among the players to watch just about every game he plays. His scrummaging is constantly improving, he is exceptionaly mobile, and can keep the ball alive with his passing and offloading abilities.

The reds are obviously looking at Stewart as their long term flyhalf. He has been eased into the role during the course of the season, starting with a few minutes here and there. He will be looking for a big game this week after being hooked before half time against the Blues.

Eighteen year old Petaia is an extremely talented young player but he has some big shoes to fill this week in the absence of Samu Kerevi. You can expect the Rebels to send some big ball carriers through his channel to test him out.

Collectively the Rebels’ front rowers are going to need to be on their game. The Faulkner, Rangi, Ainsley combination will provide good go-forward around the park but may struggle against the Reds pack at scrum time.

Hodge has been improving in his new role as flyhalf but is still spending too much time getting involved in rucks and mid-field defense. Look for Dane Haylett-Petty to often be at first receiver when the Rebels are on attack.

Philip possibly played his best game of rugby last week, centainly his best for the Rebels. He ran for 138 metres from 18 runs, they are Mafi like figures. Can he back that up this week against Rodda and Douglas?

If you compare the season’s statistics, team sheets, or ladder position for the two sides you would have to say that the Rebels will win this comfortably. The question is, which team will turn up on the night? The Reds have had a few very good performances and with a bit of better luck may have had much better results. Will the pressure of fighting for that last finals spot fire the Rebels up or cause them to choke?

I think (hope) the Rebels will put in a big performance this week. Rebels by 15 points.