A few months back, during the autumn internationals in the northern hemisphere, the ex-England hooker and current rugby pundit, Brian Moore, wrote in the Telegraph lamenting the performance of top-level referees. He asserted that “more than ever, the lottery of sanctions for offences influences games materially”.  He continued that he dreaded a World Cup final being decided on the “whim of a referee”. 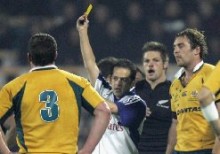 A younger Kaplan in a familiar pose

Last week, the respected Sydney rugby journalist, Greg Growden, decried the lack of accountability of our same referees. “If SANZAR is serious about having a merit system for its whistle blowers”, he said, “then it’s time to give Jonathan Kaplan a rest.” He described as “embarrassing” that Kaplan had allowed a game – Melbourne Rebels versus ACT Brumbies – “to be decided on a meaningless push-and-shove” in the final minute. I agree with him.

Just one week earlier, during the Rebels’ first-game loss to the visiting Waratahs, I went to my match programme to determine the identity of the incompetent assistant referee on the touch line. I had not recognised Kaplan with his current shaved-head hair style, but I, along with many others, was dismayed at his performance.

The round of Super Rugby matches concluded today showed similar lack of quality performance by many of the same band of supposed leading referees. It began with Chris Pollock, of New Zealand, in the Crusaders–Waratahs match in Nelson. His lack of consistency, especially at the tackle contest, made it tough going for all players, but his, and his assistants’, inability to adjudicate accurately in straightforward situations made a mockery of the laws of the game. Two Crusaders tries were scored from obvious – to all bar the refereeing team – forward passes, and then he awarded a Waratah try after the break was made by a player in an offside (by at least two metres) position.

Pollock might have missed the big moments, but he was right on top of the meaningless breaches: he recalled Daniel Halangahu and ordered a scrum when a tap kick – not a ‘quick tap’, mind you – was taken two metres to the side of the mark. Kaplan continued his current form with a totally inconsistent display that gave the Lions no chance whatever against the visiting Blues. John Mitchell must have thought that he was still in charge of the Western Force, not a local side!

Inconsistency was certainly the order of the weekend and Vinny Munro added his bit in the Chiefs home game to the Rebels. After allowing a blatant high and dangerous tackle by Tana Umaga – not his first ever, I might add – he penalised and warned Danny Ciprani for the same (adjudged) offence after his more legal tackle on Umaga. This was even acknowledged by the outrageously biased NZ commentary team. Cipriani saw the irony of the moment when, with a wry smile, he remarked to Munro, “What, for ME tackling HIM?”  On this display, immediate ‘release/playing of the ball after the tackle’ is clearly not a part of the Kiwi law book.

Keith Brown of NZ then came to the fore with his knee-jerk reaction to a ‘low grade spear-tackle’ (my description, not Brown’s) by Rory Sidey. A second tackler had arrived at the very instant that the impact of Sidey’s tackle had driven the ball-carrier off the ground. The second tackler actually titled the hapless player downwards toward the ground. This was certainly a dangerous situation and may have resulted in a serious injury, which no one wants to see, but there was clearly no intent on the part of the tackler and a red card was not warranted. Certainly there is no across-the-board consistency with referees with such sanctions for this offence.

The Stormers–Cheetahs match revealed Brian Moore’s fears in stark relief. Even the quietly spoken, but much admired ex-Springbok, Bob Skinstadt, found it necessary to question the lottery of many of the scrum penalties. This contributed hugely to the lacklustre quality of the game, with players constantly unsure of their normally instinctive reactions. The Bulls–Highlanders match, by contrast, was a super game of rugby — ball constantly moving with players attacking the defence, then a quick shift, off-load or immediate recycle.

Stu Dickinson (Australia) contributed to this with firm, fair and immediate control – and I haven’t said this too often in the past. He communicated clearly, but was never too pally with the players. I thought that he fell away in the last quarter – maybe refs get tired too – and seemed to give two ‘last’ warnings to the Highlanders, before the eventual yellow card. By comparison with his counterparts, however, he refereed a great game!

While most players and fans will share this concern with the lack of form from our top referees and the apparent lack of interest on the part of the IRB in discovering any new refereeing talent, New Zealand supporters will share no such concerns with their player talent. All Kiwi teams on display recorded strong wins (with the Hurricanes having the bye). Not normally the quickest teams out of the blocks, they are all in excellent early season form in this World Cup year. The manner of their performances will also bring joy amongst the grief of recent disasters. Their passion, commitment and drive at the tackle contest should be the clearest of lessons to all rugby teams around the world. Why so very few teams pick up on the obvious is beyond me!