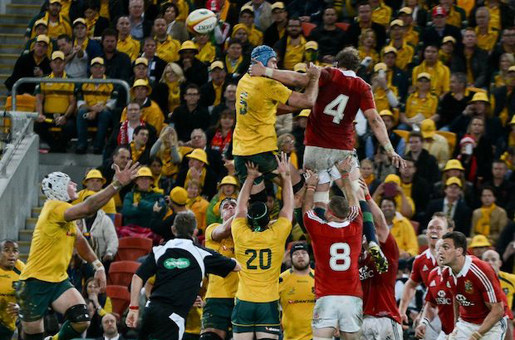 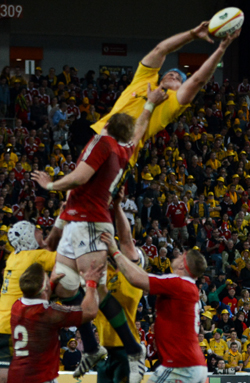 Whilst the Wallabies only had five lineouts in the first test against the Lions, their attacking lineout was good with four of the five lineouts executed well. Today I’m going to look at a Wallabies multi-phase play in that match based on a lineout play which set up their opportunity.

There are two elements of the lineout – technical and tactical.

The technical element involves throwing, lifting and jumping. With three primary jumpers – James Horwill, Kane Douglas and Ben Mowen together with a fourth backup jumper in Wycliff Palu they had more options at lineout time than they did in 2012. That obviously helps and Horwill showed what a good jumper he is as you can see in the image to the right.

However, no matter how many jumping options you have the lifters still have to do their job to a) get into the right position to lift the correct jumper; and b) make a good lift to get the jumper up to full extension at the time the ball arrives overhead.

Of course the thrower has to deliver the ball at the right time and at the right trajectory to ensure it arrives where the jumper will be.

A lot of practice has to be devoted to get these technical aspects correct but any player who has been selected to play for the Wallabies should be highly proficient in the technical areas. That allows more time to be spent on the tactical element in Wallabies training.

The tactical element doesn’t just involve calling the lineout – the best lineout play or call will not work unless every player knows and performs their role – there can’t be confusion about what the call means as even the best jumper in the world won’t get high enough to beat the opposition jumper if they’ve only got one lifter, so even the props have to learn the calls so they know where to be and who to lift.

In their five lineouts the Wallabies used three seven man lineouts and two six man lineouts. They threw to the back jumper on two occasions, the second jumper from the back twice and over the back of the lineout once. They threw to James Horwill in four of the lineouts. Their fourth lineout in the 54th minute was the only one not thrown to Horwill and whilst Horwill was lifted the ball was thrown over the 15 metre line to Ben Mowen who left the lineout early to run around as the receiver. If Mowen had caught the ball he had a little bit of space to work in but the ball went just over him and was recovered by Michael Hooper coming forward from his #12 position.

Overall it was a good performance – the statistics show the Wallabies won 100% of their lineouts as a result of this recovery but I’ll mark them as having 80% well executed lineouts.

The Lions competed in four of the five Wallaby lineouts but there defence wasn’t very effective and accordingly the Wallabies were able to secure the ball reasonably comfortably.

I want to look at how well the Wallabies forwards executed their plan in their second lineout of the match, which was their first in the second half. This lineout move was part of a multi-phase play and the forwards set it up really well. Before I look at that lineout I want to outline how plays from lineouts are co-ordinated between the forwards and backs during a match.

Forwards and backs Working Together From Lineouts

At lower levels of rugby the aim of most teams is just to win the lineout – it really doesn’t matter where in the lineout that occurs – front, middle or back. Therefore the lineout caller calls the option where there is most space (or quite often where the tallest jumper is or where the thrower can throw to).

As you progress higher up the ranks the lineout starts to get a little more complicated – where you deliver the ball and how you deliver it to the halfback need to be matched to what will happen on the first phase. For example, if you plan to drive the ball on first phase most teams like to throw to the middle of the lineout so players from both the front and back of the lineout are both close enough to wrap around and join the maul quickly. Obviously for a drive the ball is brought to ground by the jumper.

However, if the backs want the ball it’s ideal to deliver the ball from the middle or back of the lineout and off the top to get it in the hands of the halfback as quickly as possible so they can get the ball to the flyhalf quickly.

Whilst the lineout caller needs to know the requirements for delivery to make the best call, the forwards don’t really need to know what play the backs are running – they’ve got enough to learn and remember without learning intricate backs moves as well.

One of the simplest ways teams use to help forwards and backs work together from lineouts (and this applies from scrums as well) is to designate three channels running up the field – from left to right, the left third of the field is designated A, the middle third B and the right third C. 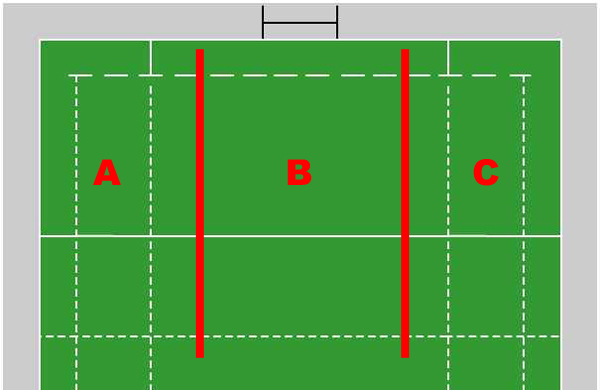 If the flyhalf decides the team is going to play wide they relay a call of ‘C’ ball to the forwards. The forwards don’t need to know what move the backs are going to run from the play – they just need to know that the ball is going wide so the lineout caller can make their call accordingly to call the ball to the middle or back of the lineout. Once the ball is delivered the backrow also know that the first breakdown is probably going to be wide and can head in that direction as soon as they leave the lineout.

If the ball is going to be played into the ‘B’ channel on first phase the lineout caller has plenty of flexibility because the ball can be delivered anywhere in the lineout and still be comfortably be moved to the middle channel without disruption from the opposition forwards leaving the lineout.

It’s a simple way for forwards and backs to work together. The important thing is that the play is decided before the forwards even walk into the lineout. Once the caller has the information they have to plan their call dependant on how the opposition are defending. If the ball needs to be delivered at the back of the lineout but the opposition are defending there, they have to call a move which might include a fake jumper in the middle to move the opposition’s back pod forward and open up some space at the back of the lineout.

At higher levels of rugby teams use multi-phase plays, particularly from set piece and a simple channel system doesn’t suffice. For example, from a lineout the play may require a punch from the #12 in mid-field on first phase, a pod of forwards going around the corner in the same direction for another close punch on the second phase and then on the third phase a reverse in the direction of play back to where the lineout was held in the hope that the opposition forwards will have moved too far into mid-field and there is space on the touch line. Many teams call this a ‘21’ – 2 phases one way, then back the other way for 1 phase.

Of course this play requires most of the forwards to move to mid-field to attract the interest of the opposition but for a small group of forwards and the blind side winger to stay on the blind side to receive the ball on the third phase. That may be the end of the scripted play and then the playmakers take over and play what’s left in front of them dependant on what the opposition defence has done.

The other thing to note is that despite the play being called, if the playmakers see the opposition have done something unexpected in defence which has opened up an alternative opportunity they can cancel the original play and target the space that has opened up. When that happens, players have to adapt on the run – no play can be so scripted that players run like robots into the position they are meant to be within the play and ignore what else is happening.

On page 2 I’ll look at the Wallabies use of their lineout to set up their attacking opportunity from a multi-phase play.

The Lions tour as it happened on Facebook – Week 4
Shute Shield Round 12 Preview: Easts searching for second scalp against high flying Students