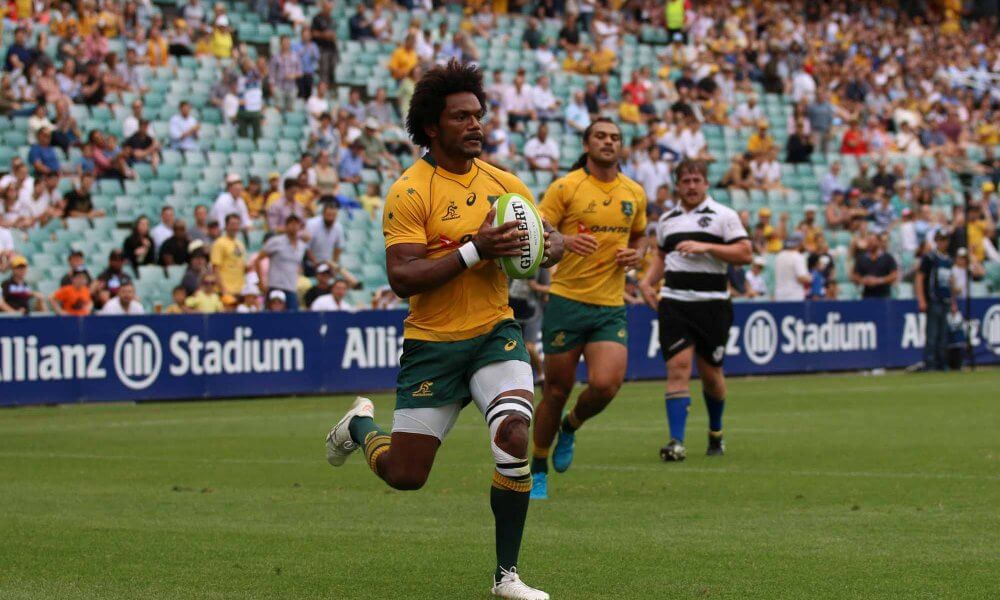 When the Wallabies pick Reece Hodge at fly half, and four Fijian-born players in the outside backs, you know the Wallabies are trying something different. Usually Michael Cheika’s teams play with more compact ball players at 10 and 12 in order to manage the attack.

Against the Japanese, it’s fair to say the experiment worked. In fact the Japanese would say it was ‘subarashii’ (excellent). It was a pretty clever move to put so much firepower on the pitch against one of the smallest international teams in orld rugby. The Brave Blossoms were brave, but they also got battered. In this edition we’re going to look at some key Red Zone plays for the Wallabies.

Most Wallaby supporters also watch a lot of rugby league, so we’re familiar with the shape known as a “Double Block”. This shape sees 2 forward runners running hard lines off the scrum half (dummy half) squaring up the defenders to create space on the edge. It’s particularly effective close to the opposition try line, and off the back of a strong carry and front foot ball from the previous ruck. In this clip notice how good Tatafu Polotu-Nau carries and presents the ball. The ball is on a platter for Nick Phipps and Kurtley Beale steps up as the first receiver to feed the wide runners for a well executed try.

In the 1960s Vince Lombardi won multiple Super Bowls with the Green Bay Packers. The cornerstone of his offence (attack) was the “Power Sweep” and his Packers ran this play so well it didn’t matter that the opposition knew it was coming. They still made it work. Since Stephen Larkham joined the Wallabies they’ve been running their own version of the “Power Sweep” from lineouts on the opposition 22m line.

This play starts with a dummy drive or peel at the tail of the lineout in order to get the scrum half in motion. The scrum half has the outside centre running a hard “Block Line” with the fly half sliding out the back with the blind side winger on his inside. Phipps and Tevita Kuridrani did a great job cutting off the Japanese tail gunner (2) and enabled Reece Hodge and Henry Speight to isolate the Japanese fly half. To be fair he wasn’t too keen on taking Henry on, in full flight.

Late in the game off the back of a Wallaby lineout drive the Australian backs decided to have a crack at running their version of the “Double Block”. It’s a clever thing to do when you have 2 massive ball carriers in the centres.

This time, close to the opposition try line, Phipps passes to Samu Kerevi who in turn offloads to Tevita Kuridrani for the try. Kerevi also has Reece Hodge available on the run around, and that option was open as well on this occasion. Had Kerevi played out the back to Hodge, the Wallabies had Beale and Marika Koroibete in heaps of space.

The Wallabies experiment playing Hodge at 10 paid off against Japan. Beale stepped up and played as a first receiver to assist with the ball playing, and Hodge kicked very well.

However, it must be said that this Japanese team did not test the Wallabies, so the jury is still be out on Hodge as a fly half against a top rated nation. Against the Welsh we can expect to see Bernard Foley back at 10 with Beale and Karmichael Hunt probably sharing the 12 & 15 roles. The Wallabies have had a lot of success in recent times attacking the Welsh tight forwards on blind sides. Expect to see some sequence plays designed to do this next Saturday. Until next week…”sayonara”.