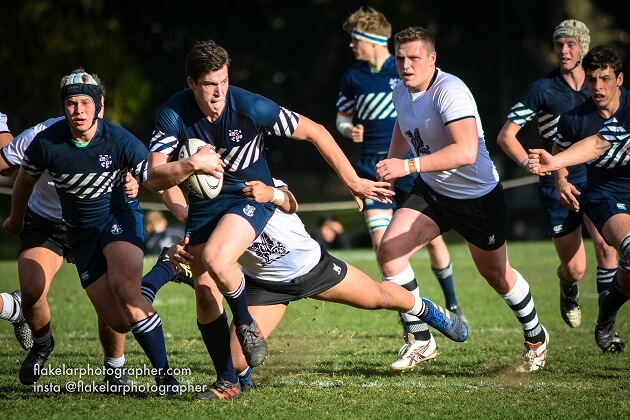 It was a windswept afternoon which greeted the teams for the final game of the GPS season. Newington fresh from a win over eventual joint premiers Kings against a winless but always hard to beat Shore team. A smallish crowd had just seen a solid win by Newington seconds and a convincing win by the Newington 16As.

Running into a strong wind, Newington took the ball into attack, and the always dangerous Koula broke the defence, but tripped with the tryline in sight before Della Marta secured the ball to dive over for the opening try. Converted Vei – Newington 7-0.

From the kick-off, play remained in the Newington 22. From a scrum deep in their defensive 22, Newington went wide for Koula to scorch down the sideline and score under the posts. Converted Vei- Newington 14-0

Playe settled down for a period, as Shore finally had some possession and tried to get into a scoring position. However, the Newington defence held firm before Lewis swooped on a loose pass to run 60 metres for a try. Converted Vei with a drop kick after the ball was blown off the tee – Newington 21-0.

Now, it was Newington’s turn to play with the gale behind them and were soon back on the attack. From a scrum in the Shore half, the ball went through the Newington backs with fullback Weekes chiming in to score. Converted Vei – Newington 28-0

Newington went straight back on attack with yet another try through the backs by Dellow. Converted Vei – Newington 35-0.

It seemed at this point as though Newington would roll through the second half and post a big score, but as always Shore fought back. Some scrappy play and a turnover saw Shore awarded a penalty try. Newington 35-7

Unfortunately from this point, the game lost some direction as both sides made mistakes and the whistle dominated. Harding burrowed over from close quarters for a try which was unconverted – Newington 42-12. Then Shore worked a nice little move from a 5 metre lineout which saw Crafter go over untouched for the try. Converted Jackson – Newington 42-19.

Sublime backline play set up this victory for Newington over a Shore team which never stopped trying and did themselves proud.

Like from some apocalyptic movie set, the surrounds strewn haphazardly with 4×4’s, Utes and SUV’s of all kinds, thousands of “extras” in attendance to bear witness from dusty, wind-swept hills, and the verdant arena of J.S. White Oval, the stunning centre-piece. The scene was set for one final ‘showdown’ of Season 2018.

In a second-half comeback that sent Blue & White drums into tub-thumping frenzies, and their players, students and supporters into delirium, Kings grabbed a share of the Season’s 1st XV chocolates, defeating Scots 24-18.

An early offside Penalty goal conceded to Kings’ best on the day, Flyhalf Matt Minogue(10), and in response, Scots strung together multiple-phases before skipper Will Harris(8) crashed over out wide.

The big Westerlies ensured a nightmarish day for all the kickers, with no conversions at all. But especially so in general play if they tried to grab too much purchase on the grandstand touchline.

Scots maintained more multi-phase possession to get into commanding field position ahead of springing Left-Wing playing down the right, Ben Zucchiatti(14), to score out wide and grab a 10-3 lead.

Kings were focussed on manning-up in defense, and halfback Seb Strang(9) tiptoed up the middle to serve trailing THP, Nick Wingrove(3) to score. A gettable conversion from Charlie Savala(10) was touched in flight by Kings’ scarpering run-out men, and Scots led 15-3.

Defense on both sides was dictating the contest, disrupting any real continuity, and Minogue kicked another Penalty for 15-6.

In the shadow of Halftime, a carrying-over call against Scots and resulting 5-metre scum, was capitalised on by Kings; the ball spread wide to a flying Joseph Suaalii(11) to dive in and close out the Half.

A arm-wrestle of multi-phased possessions, busy-as-fleas loose forwards on both sides, defending like men possessed, and an exchange of Penalties was all the second Half offered up leading into a tense final quarter hour.

A match-ending leg injury to Scots’ dynamo openside, Ben Robson(7), opened the defensive door just a crack for Kings’ Matt Minogue(10) to break through the middle, chip ahead, and find Robson’s opposite openside, Oscar Mitchell(7), in full flight down the grandstand touchline, evading Scots’ cover and dotting down for Kings to now lead, 19-18.

Inside the last minute, Kings’ Matt Minogue(10) barged through a missed Scots’ first-up tackle, the Gilbert ending in the hands of one of the Season’s revelations, Joseph Suaalii(11), who went over out wide for his brace on the day.

Simultaneously, that sealed Kings’ comeback win, and it unleashed euphoria for one entire school cohort, consigning the other to the soul-searching depths of the “woulda, coulda, shoulda” of what might’ve been?

Kings
Matt Minogue(10) – imperious all around game with some inspiring second-half D effecting turnovers at critical junctures
Archer Holz(3) – led the Kings’ pack, setting the platform needed; ‘nuff said
Joseph Suaalii(11) – a finisher par excellence, with dazzling footwork; has a nose for the tryline like a Bloodhound on a wounded rabbit

Scots
Will Harris(8) – perpetually amongst his team’s best afield
Nick Wingrove(3) – locked down Scots’ out-weighed scrum, ensuring a mostly even contest in the set-pieces; lively with ball in hand
Jeremy Williams(5) – leader in the heavy-lifting department, providing an immovable object in defence and an (almost) irresistible force in mid-field attacks

In front of the biggest crowd at J.S. white Oval for years, the Kingsmen maintained composure to outplay the fancied Scots to bring home Season silverware (shared with Joeys) for the first time this decade.

Powering off a solid set-piece and spirited across-the-park defense, Kings negotiated the blustery conditions well, without necessarily mastering them; capitalising on turn-overs and broken-play opportunities to have their noses in front when it mattered.

Given the tightness of their losses last week to Joeys and now this week to Kings, Scots may rue some lost opportunities and ineffectual late-game kicking, gifting away possession when it mattered, but Kings, having defeated their two closest rivals, thoroughly deserved their share of the 2018 Premiership.

Congratulations to all Opens players and coaching staff on a fine, entertaining as-all-heck, Season, and especially to all the players’ Mums and Dads and families who provide their support unreservedly, no matter the results.