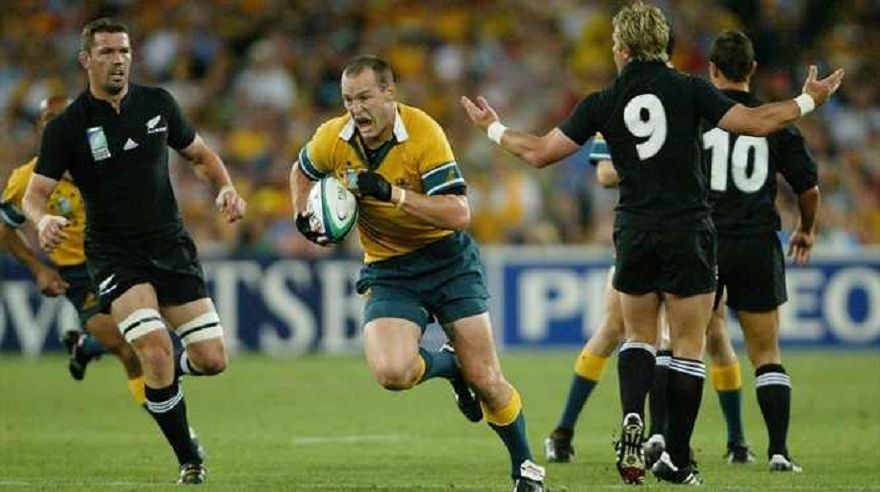 Welcome to the first edition of World Cup Classics, a series of articles in which I revisit great Wallaby World Cup victories.

Today it’s a match that is widely regarded as one of Australia’s great rugby moments, the victory over New Zealand in the 2003 Rugby World Cup semi-final in Sydney.

The Wallabies were under pressure after a series of less than convincing performances, including a narrow win over Ireland in the final pool match and a scrappy win over Scotland in the quarter final. While their defence was proving solid there were plenty of question marks over their attack. New Zealand were riding high after comprehensive victories in each of their pool matches (though Wales gave them a brief scare), and a pretty easy win over the Saffas in the QF. King Carlos had the backline humming, with Joe Rokocoko the breakout star of the tournament. Having won the last Sydney Bledisloe by 50-21, they were strong favourites to take the match and proceed to the final.

Putting it bluntly, it was a fucking sensational game. Easily one of the best Wallabies performances ever, even though they only scored one try, which came from an intercept. They played with pace, width and enthusiasm, and the fact that they only got across the chalk once was a testament to the Kiwis excellent scrambling defence, and their propensity to give away penalties any time the Wallabies neared their 22.

Considering the pressure they had been under during the week, and the criticism of their attack, watch the first few phases of the game. They spurn the chance to kick in order to keep the ball in hand. Even though they really only make 15m in four or five phases, it’s impressive stuff, especially considering the dour expectations of knock-out footy. Even the usually reserved Gordon Bray loses his shit for a second, after Mat Rogers’ run:

The Wallabies dominated the early minutes. In fact, the All Blacks didn’t have any meaningful possession of the ball until the 7th minute of the match, but had kept the Wallabies off the scoreboard. After a few promising raids, thwarted by excellent wide defence from Sailor and Tuqiri, they tried a set move from a lineout which was intercepted by Mortlock (which you’ve all seen, so won’t waste space on a clip). A massive play, and now instead of receiving the rewards for minutes of pressure on the Wallaby line, the All Blacks have to trudge back to their posts, down by a converted try.

The Wallabies then went on the attack. They went at the All Blacks with pace and power and the visitors couldn’t cope, giving away penalties under pressure. The clip below is a prime example- Mortlock charges through before the ball is quickly recycled a few times, before the Kiwis are caught offside (and Aaron Mauger pulls off an unnoticed cheap shot on George Smith):

Just before half time the All Blacks hit back, through a try to Reuben Thorne after Stephen Larkham spilled the ball in the Wallaby half. Though they were well outclassed for most of the half, the ABs went to the sheds just six points down and in with a sniff. But whatever Eddie Jones said at half time must have worked wonders for the home side. Have a look at what they unleashed to open the second half:

Forwards and backs running with pace and power, quick recycle of the ball, good skills. These were the hallmarks of the Wallaby performance. They starved the Kiwis of possession, and gave them no opportunities to counter-attack. Their defence was incredibly effective. Watch this passage of play, where they drive the All Blacks back in successive phases. It also highlights the lack of creativity from the New Zealanders when the play broke down:

It was that sort of night for the visitors. The Wallabies were just on, but never looked completely dominant. They just kept putting together good passages of play, which were punctuated by Kiwi penalties:

And that was all she wrote. Despite having opportunities in the last fifteen minutes to close the gap, the All Blacks looked bereft of ideas, and couldn’t penetrate the Wallaby defensive line. The final score was 22-10, with Elton Flately kicking five penalties after Mortlock’s early try.

It was an all-time classic Wallaby performance, with no real flaws. They played aggressive, attacking rugby, but also played smart World Cup footy- taking the points whenever they had a chance. It was also helped by a great reffing performance from Chris White, who kept the game flowing really nicely and gave no side any real favours.

The forwards made ground with every carry, and largely negated the influence of Richie McCaw, though he did manage to torment us on a few occasions. The lineout was particularly outstanding, with Justin Harrison totally dominating Jack and Williams in the air. Nathan Sharpe was the most effective ball-carrier, until he had the snot knocked out of him by Jerry Collins in the 29th minute and he groggily jogged off. Brendon Cannon was also outstanding, making big hits and charging runs.

But it was the backs who were truly dominant. Stephen Larkham was at his floating, ghosty best, making effortless breaks on multiple occasions. Elton Flately has to be one of the most under-rated Wallabies of all time- his boot was a key factor in the match, but he also defended extremely well and made a couple of really smart plays. Mortlock was at his very best, as the clips demonstrate. And I was really impressed with the back three of Rogers, Sailor and Tuqiri. They all worked their arses off, with the wingers especially powerful in close to the ruck. Much better than I remember them.

– Have a look at what the anthem singers were forced to wear: 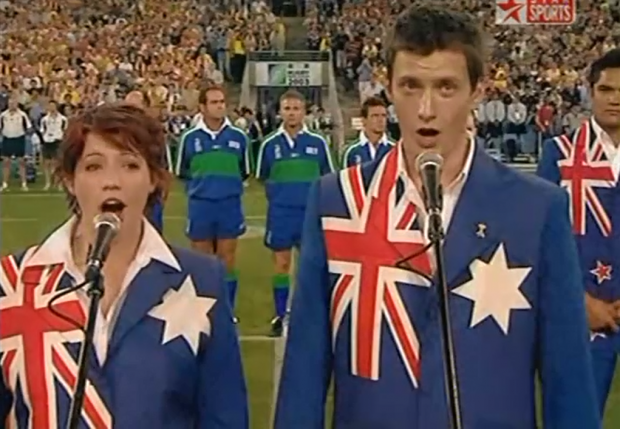 – The crowd was incredible, but there were also some strange moments. At one point a really loud chant of ‘Swing Low, Sweet Chariot’ started up, and I have no idea why. Also the channel 7 microphone picked up a few priceless early sledges:

– The speed of the game was noticeable, and not just while the ball was in play. The time it took to set scrums was especially impressive. I measured it a few times- from the moment of the referee blowing the knock-on to the ball coming out of the scrum, the average time taken was around 28 seconds. The forwards just jogged in, bound up and got on with it. As a comparison, I had a look at the recent Waratahs/Reds game. Where a 71st minute Wallabies/ABs scrum took 29 seconds, a 14th minute Tahs/Reds scrum took 54 seconds. Both had no resets, and the ball was not held in the scrum. It seems the only real difference was the attitudes of the players to keep the game moving.

– In the dying minutes of the game, it was clear that the Wallabies had won the game. They thwarted one last All Black raid, and big Jeremy Paul cleared with his right boot all the way to the halfway line. The crowd was jubilant, the Wallaby bench was jubilant… except for one man. Poor old Chris Whitaker had spent another 80 minutes on the pine, and just wasn’t feeling the love:

I love that clip. Here it is in gif form:

Everyone is loving it. Big Stirling is pumping the fist on the only functional arm he has left. Matt Dunning’s giving it the double pump. Morgan Turinui is on his feet, as is Matty Burke. Nathan Grey has his arm in the air, George Smith can’t wipe the grin off his face. Even baby Matt Giteau is loving it. But in the middle sits poor old Whits, who just can’t bring himself to smile. I shouldn’t laugh at his misfortune, but I find it hard not to. He’s a legend of the game in his own right, but come on… cheer up mate!!

So there it is, the Wallaby game against the All Blacks in 2003. Tune in again in a couple of weeks’ time where I will break down another classic Wallaby World Cup victory.