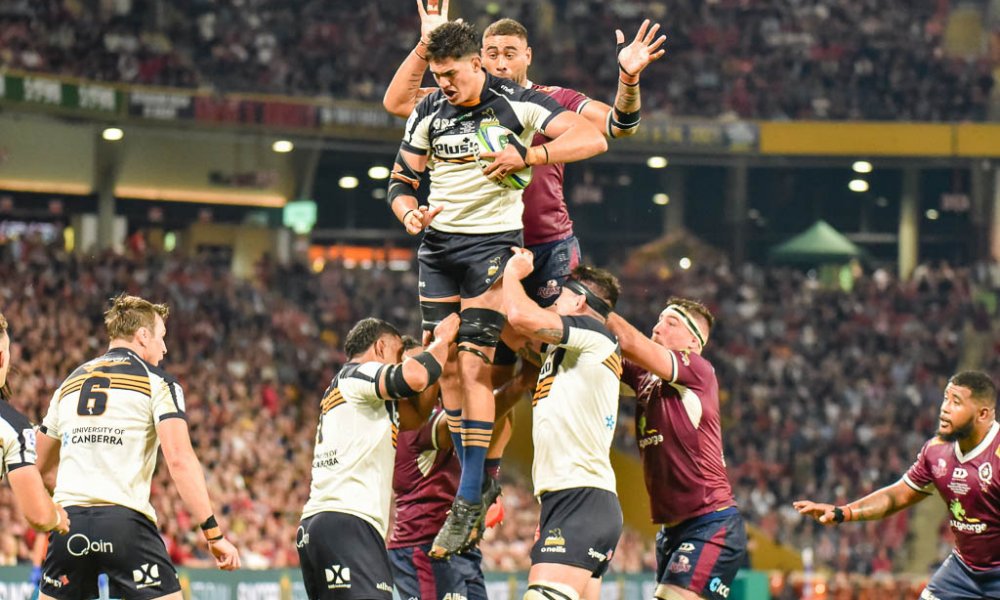 Brumby Darcy Swain wants Reds to shut up (you’re not my real dad!)

In pre-WWE smackdown trash-talk news, G&GR’s own Nathan Williamson reports that Brumbies lock Darcy Swain still feels the pain from last year’s heartbreaking (for some) final against the Reds ahead of this Friday’s blockbuster top-of-the-table clash at GIO Stadium (Canberra).

Watching the Reds and the 40,000+ fans celebrate wildly still stings for the 24-year-old, eager to ‘shut them up.’

“They carried on a bit, I thought,” Swain said to reporters on Monday. “I just want to go out there and shut them up this weekend.”

“I think a lot of guys know they are an emerging powerhouse. They have a lot of young guys coming through like (Fraser) McReight, Tate (McDermott) and they’re bringing more younger guys through with them.”

Meanwhile, Rugbypass reports that Reds winger Josh “no” Flook says Queensland are relishing the chance of testing themselves against the Brumbies. Both Australian sides are unbeaten (and on top of the competition table) after four rounds with the Brumbies leading the charge from the Reds courtesy of a bonus point.

Last year the biggest margin in three games (all won by the Reds) was three points, which came in the final when the Reds got up 19-16.

“Obviously they’re a very good side and have been for the past couple of years,” the 20-year-old said on Tuesday.

“We’ve developed a really good rivalry against them so it’s exciting to come up against one of the heavyweights in the competition and we get to compare ourselves to them early in the season, which is nice.”

“It’s a very hard place to go down and play – they got a little fortress down there and I’m sure there’ll be up for it and we’ve just got to go down and match it with them.”

The lack of distracting night-life should make it even easier for the Reds to focus.

Paul Cully reports for Stuff that the Blues’ blockbuster game against the Crusaders in Christchurch on Saturday is in jeopardy, as is the Highlanders’ clash with Moana Pasifika on Friday, as a potential fixture crisis looms over Super Rugby Pacific. The Blues confirmed on Tuesday that they were dealing with more cases of Covid-19, after several players had to withdraw from the game against the Highlanders last Friday.

”We are not in a position to add any other details at this stage, but will be able to speak further on developments hopefully by tomorrow.” Blues chief executive Andrew Hore said in a statement.

”Note that all planned media interviews with players set for today will be postponed and we will be in touch to reinstitute these once the situation is resolved.”

Meanwhile, the Highlanders cancelled training on Tuesday as a growing number of Covid-19 cases within the squad puts the clash against Moana Pasifika in increasing doubt.

The Highlanders are scheduled to host Moana Pasifika in Dunedin on Friday, as they search for their first win of the Super Rugby Pacific season.

However, a spokesman said: “Due to a growing number of Covid Cases across players and staff we have taken the precaution of cancelling today’s training and media session. At this point there has been no decision made on Friday’s game.”

Both teams will be desperate to play for different reasons.

The Highlanders need a victory to kick start their season, while Moana Pasifika have already suffered the frustration of having three games postponed.

If the Highlanders game does not proceed, it will put more pressure on Moana Pasifika’s ability to cram a growing backlog of games into the remainder of the season.

They already face the prospect of twice having to play three games in eight days to fit in the postponed games against the Blues and Chiefs, and the postponed match against the Hurricanes is yet to be rescheduled.

The alternative would be to hand two competition points to each side for a cancelled game, but New Zealand Rugby has signalled a determination to play as many games as possible.

In other NZ news, according to The Guardian a Christchurch library was accidentally left open on a public holiday, but nothing was stolen. One customer left a note saying they were taking some CDs because there were no librarians in sight: ‘I’ve decided to take the CDs to teach you a lesson in how not to operate a functioning library.’ At time of publishing, Christchurch City Council has not responded to G&GR’s queries as to whether “The Bist of Split Enz” and “Split Enz Greatest Huts” have been returned.

According to Fox News, as the rest of the world sides with private equity firm CVC, the NZR have aligned with rival financiers Silver Lake.

SANZAAR ally South Africa has also aligned with CVC and Australia and Argentinian officials are also in talks with the private equity giants.

Rugby Australia plans to sell up to 12.5 per cent of its commercial assets and have been negotiating with both CVC and Silver Lake. But there is a real possibility that Rugby Australia could go with CVC.

RA is keeping its cards close to its chest because it is acutely aware of the importance of the next two months. The potential rivers of gold that will flow from private equity and a successful World Cup bid could be a game changer. Until the World Cup is secured, RA is in financial limbo.

Once the World Cup rights are secured, the governing body believes they will see an upsurge in sponsorships and revenue. It will then turn its attention to ironing out with which private equity firm it will side. It is expected  that a bidding war will help its cause.

Together with a home British & Irish Lions series in 2025 (and an expected good showing of G&GR faithful), RA is banking on the three major events on the horizon, which will start with a World Cup in France next year and be bookended by a home World Cup in 2027.

Meanwhile, the NZR hopes Super Rugby Pacific is the future. It might be, but RA have only signed a two-year deal with their New Zealand counterparts and could wash it hands and wave goodbye if relations do not improve.

RA could go “full NRL and AFL” and centre its attention on building a strong Australian-only domestic competition.

There is the thought that playing New Zealand less will benefit Australia. Already, the Wallabies and All Blacks will play each other just twice a year until 2025, down from the three Tests of past seasons.

The governing body will continue to look to play other nations such as Japan more and more yet, until the World Cup rights are set in stone, everything is up in the air.

GA&R reports, based on a Nine report, based on a Stuff report, that Ireland’s Australian-born prop Finlay Bealham (shown centre with the dreadlocks) had an “emotional’’ reunion with his parents for the first time in over two years after scoring a bonus-point winning try against the Soap Dodgers at Twickenham. Ireland won 23-15.

Watching among 82,000 fans in the stands were his parents Andrea and Roy, who had flown over from Canberra, and had not seen their son since before the Covid-19 pandemic.

[Not bad by local standards, since most Irish people haven’t seen their dad since he “went out to get smokes” when they were 11 years old according to my comprehensive research]

Bealham moved to Northern Ireland – where his grandmother was born – in 2010 after missing out on the Brumbies academy in Canberra.

He has been a professional frontrower since 2014 for Connacht, where he plays alongside Kiwi midfielder and Ireland test teammate Bundee Aki.

His opportunities have been limited due to Ireland’s propping depth with players of the calibre of Tadhg Furlong, Andrew Porter, Cian Healy and Dave Kilcoyne, but Bealham, who can play both sides of the scrum (earning Nutta’s suspicion), has made 22 appearances and scored three tries.

Bealham is one of six Ireland squad members from Australasia. Aki, wing James Lowe, halfback Jamison Gibson-Park – the man of the match against England – and reserve flyhalf Joey Carbery were born in New Zealand while Bealham and wing Mack Hansen are Australian.