Video: Anatomy of a Try – Rory Arnold vs Western Force 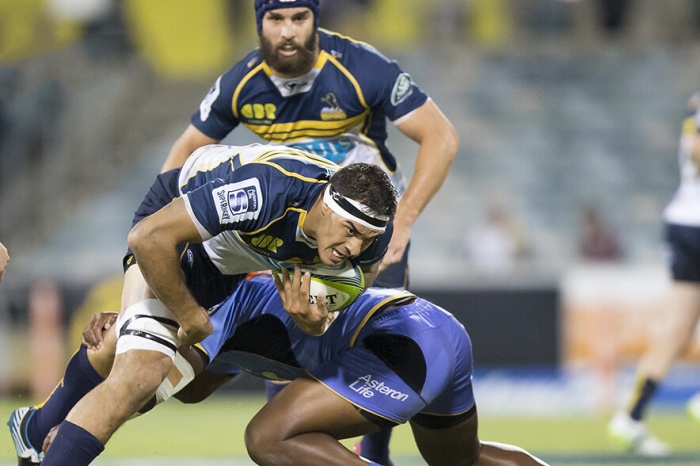 Video: Anatomy of a Try – Rory Arnold vs Western Force

We all like to see running rugby but the game can’t always be about length of the field tries and behind the back passes, Ben Tune style.

Sometimes teams just have to take the points on offer and get themselves into a position to win the game whether it be a classic rolling maul or a pushover scrum.

While the ACT Brumbies vs the Western Force last week served up some lovely running rugby and some cracking open field tries, we’re not going look at any of those though and instead look at the Brumbies first try scored off a maul from a 5m line out.

Now I fully admit, seeing the big lads cuddle isn’t always the most entertaining part of the game, but technical forward play is a massively important part of the game. Teams who can’t get parity up front can have all the flashy backs in the world and still come out on the wrong end of the score.

If a forward pack is able to demonstrate superiority early on it gives the halfbacks and the back three the confidence to play the game in the right areas of the field and gives the whole team the confidence that they can strangle the game for the win if their wider game isn’t paying off.

It’s something that should never be underestimated and the ACT Brumbies being one of the most pragmatic teams in the Aussie Conference know this.

This is one of the reasons this try was so important in this game. It literally told us everything we needed to know about the ACT Brumbies ability to dominate the Western Force upfront. The try comes from a lineout, that transitions into a maul and then a series of pick and goes, but importantly it’s the 2nd or 3rd time the ACT Brumbies had caught and set the ball from a line out the previous times making substantial gains.

You can often tell a lot about a game in its first 5-10 minutes and it was clear that from the first try in the game that no matter how bravely the Western Force played they were not leaving Canberra with the points.  It had a huge effect on the game and set down a serious marker for both the game and the rest of the season.

Five minutes into the game it sent a message to the Western Force that no matter what they  did the ACT Brumbies could just walk it over their line and score. Teams that have the ability to do this gain a huge psychological impact over their opposition and you can be certain other teams will be taking notice of the ACT Brumbies ability to tighten up when they need to.

Australian Rugby for me has always been about intelligent play, and using limited resources to make a team that is better than it’s component parts. Maybe that’s why I like the ACT Brumbies so much, because for me they are a team that think about the game and approach it in a methodical manner making full use of all their players.

Force V Rebels Round 5 – Face Off
Preview: Highlanders vs Waratahs