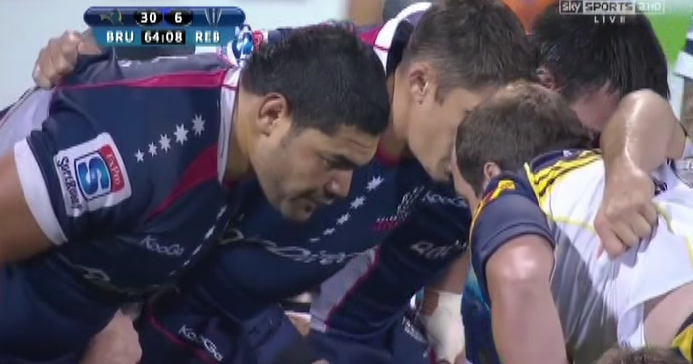 Watching the Rebels scrum performance against the Blues two weeks ago was painful.

The Rebels started with a front row of Nic Henderson, Adam Freier and Rodney Blake against Tony Woodcock, Keven Mealamu and Charlie Faumuina. From the first scrum the Rebels were under pressure and they were further disrupted with Freier being injured and replaced having packed only one scrum.

After just three scrums referee Bryce Lawrence had awarded one penalty against Blake for binding on the arm and a free kick against him for moving so that there was a head on head situation.  The Rebels coaching staff obviously sensed that Lawrence was getting frustrated with Blake and he was replaced by Laurie Weeks after 22 minutes and before the fourth scrum of the match.  The decision reminded me of Robbie Deans replacement of Al Baxter after 30 minutes against the All Blacks in 2009 after he was penalised on multiple occasions by Jonathon Kaplan.

Unfortunately for the Rebels the introduction of Weeks made little difference and when he had to leave the field with a dislocated shoulder, Blake came back on.  The Rebels scrum continued to be under pressure all match and in the second half Lawrence penalised Blake for not taking the hit.  Between them Blake and Henderson gave away five penalties and free kicks at scrum time during the match and both sides of the scrum were under pressure throughout.  Were the penalties Lawrence awarded against the Rebels justified? Was the Blues scrum really that dominant?  The answer to both questions was clearly yes.

Similar problems existed against the Brumbies and this time it was Craig Joubert who was penalising Henderson and Blake for scrum infringements.  Once again Blake was penalised for not taking the hit.

Here’s footage of the fifth scrum of the game against the Blues whilst Weeks was on the field.

It’s rare to see a team make this much ground from a scrum and this shows the depth of the problems with the Rebels scrum.  So what improvements do the Rebels need to make to compete effectively at scrum time?

Let’s start with what should happen in the scrum. Every single player in the forward pack has a role to play in the scrum but no matter what the other six players in the pack do, the foundations of the scrum are built upon the two props.  The following image shows the All Black scrum with the whole pack in a good, low position.  Importantly the whole pack is at the same height and their strong body positions with flat backs means that the weight of the entire eight can be transferred straight through to the opposition. Of course if your props are not low with a good body shape, that weight doesn’t get transferred effectively through to the opposition. 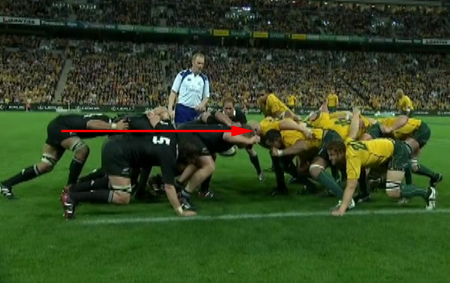 If you were trying to design a really good scrumaging prop I’d summarise what you’re looking for as 1) physical strength 2) the right attitude 3) good technique and 4) knowledge of the dark arts.  I didn’t include size as one of the elements because whether a prop is small or large, size issues can be overcome through strength, good technique and a good attitude.

Whilst there are many areas we could examine to make improvements, in my opinion the most crucial area that needs to be addressed by the Rebels is body height.  With body height it’s pretty simple – whoever gets lower (and stays lower), normally wins the scrum battle.  The key to body height is the hips – if you get your hips low (and keep them low), the rest follows.

The loosehead’s job is to get his head onto the sternum of the tight head prop and then drive slightly upwards.  To do that the loosehead has to get lower than the opposition tighthead on engagement.

The tighthead’s job it is to nullify the loosehead by trying to use his right shoulder to keep the loosehead under control by not allowing him to get his head onto the tighthead’s sternum and then drive upwards.  To do this the tighthead must stay low and drive straight through maintaining lower body height than the opposition loosehead.

The following video shows examples of good and bad technique.

I could show you many more clips with good and bad examples of technique where body height wins the day but the important points are that you start low, you drive your hips forward which lowers the hips and knees so you’re in a low position at the engagement and then you have to keep your hips down as you drive forward.

That is not what Henderson or Blake are doing at the Rebels and until their technique is addressed in this area, the Rebels scrum will continue to struggle.  Let’s have a look at how they performed in the games against the Blues and Brumbies.

Whilst I’ve focussed on the Rebels in this analysis there are plenty of other props who have similar technique issues and not just in Australia.  With Weeks injured and Somerville retired the Rebels are really struggling at scrum time.  No doubt they’ll be working hard with Ben Darwin and Matt Cockbain and hopefully that work is focussed on their technique.