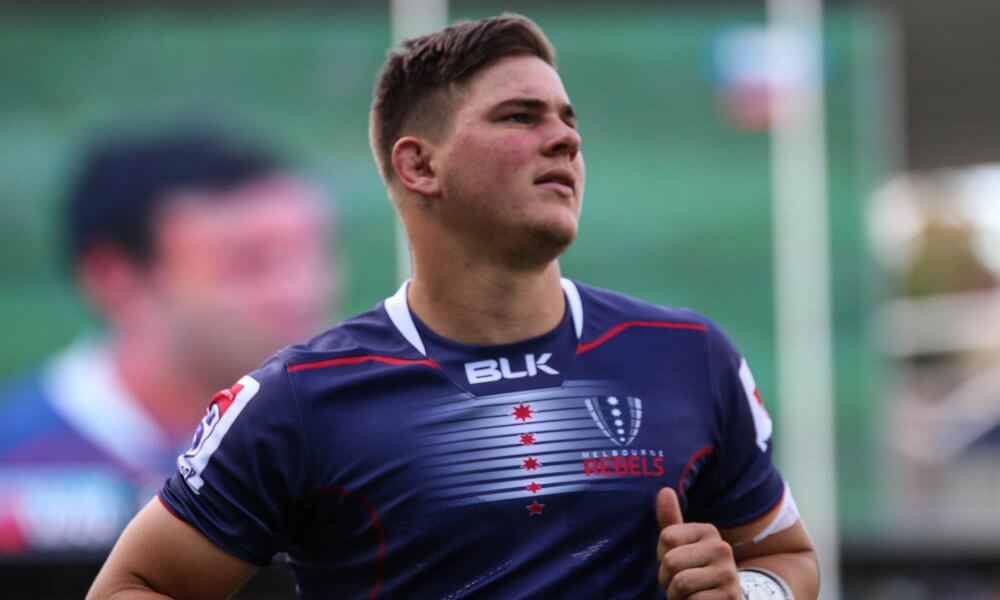 Hi all and welcome to the Top 5. I considered only doing a top 2 this week, as only 2 of the Aussie teams played, but it looked a little slack so we went with more. I’ve given you the usual good, bad and ugly, grade all our teams who played, look at a few facts, bring the TMO under review, consider how watchable games are, and why and throw some of the best tries of the round at you.

Good – The Rebels bounced back after their loss to the Tahs and again were back to scoring some pretty decent tries. Its good to see them back on form and it certainly has heightened the anticipation for the first Kiwi game for an Aussie team this season. 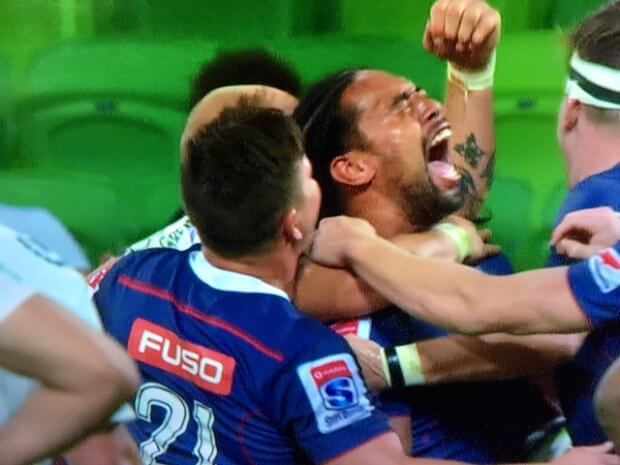 Bad – I don’t know what those who were responsible for coming up with the draw this year were thinking – were they thinking? Am I the only one who thinks it was poor scheduling to have just 2 Australian teams playing in a round, and only one of those at home? We had the Rebels on Friday night then sometime Sunday we could catch a replay of the Reds game (unless you were willing to stay up/get up at 2am to watch). Not a great way to make rugby more appealing to those who are on the fence about the game. Especially with the other codes going on this weekend. I don’t know how much input RA had into the schedule, but it doesn’t seem to be in the best interests of Australian rugby.

Ugly – In somewhat of a quiet affair the new Wallabies forwards coach has been appointed. I am not sure how some of the good performing forwards coaches that are on shore were over looked but personally I don’t think it’s a good thing when you see the appointment of a coach to the Wallabies that has 4 years of Top 14 rugby coaching and most recently in the Pro D2 and has been out of the country for over a decade. Even more so when the Biarritz and Top 14 supporters are asking the same questions about what he could possibly bring in Rugby forums and suggesting better alternatives. Biarritz don’t seem to be too bothered about releasing him 2 years early from his contact.

Rebels B+ The Rebels were back to their winning ways against a fairly poor Sharks outfit. The Rebels heaped the pressure on in attack and stifled most of the attacking opportunities by the Sharks. One area of the Rebels game that they will definitely need to work on before they meet the Hurricanes is their tackling. They had a poor rate again, at just 75%, which at least was an improvement on their 67% the previous week. But it’s hard to imagine the Hurricanes not punishing a team who don’t make their tackles. So the Rebels better be doing their tackle training.

Reds C They didn’t get the win, but still walked away with a bonus point, which is something at least. Considering they were 18-0 down at one point and actually had a chance to take out the game after the siren, they can’t be classed as bad. So they get an average mark. There was nothing really outstanding about their game, but nothing terrible. Their all-powerful scrum is starting to crumble a little, but they are scoring tries again and not relying solely on penalty kicks.

Just for something different I thought we’d throw some interesting facts at you. Nothing of ultra importance, just things we found to be interesting.

Did you know that no South African team has won on the road this year? 6 rounds in. Even the Aussies are doing better than that (only marginally though). The Rebels and Brumbies each have one away win (against the Sunwolves), While the Reds have a win and the Tahs have a draw.

Meanwhile no Aussie team has lost at home. Yep, we have won all of our home games, be they against local or international opponents.

Going back to South Africa for a moment, listening to their fans reminds me a lot of listening to Aussie rugby fans last year. There are calls for du Preez to get the sack from the Sharks for their terrible performances (Gibson, McGahan, Stiles anyone?) There are a LOT of unhappy fans. Sharks fans in particular, apparently they were favoured over there to be the top SA team this year.

How weird is the form of teams this year? Take the Jaguares for example. Absolutely ripped it up against the Waratahs, totally fell to pieces against the Reds, then flipped again to play great rugby against the Lions. To a lesser extent we have the Rebels, going along swimmingly then bang! Smashed by the Tahs, who in turn had only just been smashed by the Jaguares. Talk about unpredictable! 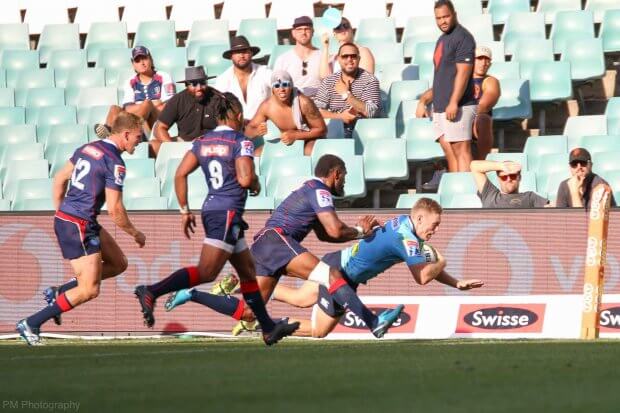 Tales of the TMO

This round we saw a number of involvements from the TMO. Some resulted in decisions we agreed with, some we didn’t (depending on which team you supported) Again, the old favourite of control v downward pressure reared its head. We live in hope that at some point World Rugby will clarify or better yet simplify the laws. But in the meantime, the general rule of thumb is A player must either

This one was awarded a try, then suddenly we were watching footage of a breakdown. There was a bit of debate about this one at the time, it does look like a Sharks player got a finger to it before the Rebels player on the ground touched the ball. But why did it take so long to check it, and who decided to check it? The referee awarded the try immediately, was it the AR or the TMO who requested the check?

Remember the old days when we all had black boots but different socks? Well now we have evolved to all having fluro orange boots and pretty much identical socks. Evolution hey! After initially calling no try, the TMO actually decided to re-check the footage, and a good thing he did too. The orange boot he saw go out, that he thought belonged to Ben Lam, actually belonged to one of the defenders. Thanks to the double checking, the TMO awarded one of the tries of the round.

Why was that so hard to watch?

Friday night, prime time, 8 tries scored, a win for an Aussie team; all the things you want as a rugby supporter, right?

But it had me confused and wondering if my beer was defective or something. Concluding it was unlikely a beer issue I turned to Mrs Mst and asked, was that me or was that game hard to watch? She nodded her head and agreed. After short discussion neither of us managed to explain why.

Over the weekend I pondered why? Again, the discussion was opened and we started to identify a few things and we stated to realise it was not just one thing but many things. Looking back at the game there were many elements that are parts of the whole package.

Now, before Rebels supporters jump to conclusions in anticipation of where I am going with this I want to make it clear that generally that the way the Rebels played and their performance was mostly positive.

As I dissected the game and started looking for the elements it’s not hard to start with the commentary.  It didn’t take long until the inevitable Wallabies selection talk started. Out spewed the verbal diarrhoea about the “this” game super stars. Do we care 3 months out from international rugby? Do we want to hear the constant Wallaby centric babble while watching super rugby? It’s amazing, I can watch the Kiwi game and its rarely discussed other than a fleeting comment. The passing comment that Super Rugby is nothing more than a selection trial for the Wallabies very much seems to ring true and really devalues Super Rugby.

But then we have our experts or side line commentators. They usually stand between the 2 teams, at the venue which they have travelled to, with the game being played right in front of them. So, I was super impressed that 2 weeks running Natalie Yoannidis could not only not be able to correctly name the teams playing but managed to make comments containing seemingly random information that made no comprehensible sense.

Then there was the work experience kid; AKA the [alleged] referee. Line out balks, forward passes, high shots…..obviously didn’t want to interrupt the flow of the game. That is when he could actually get the Rebels to play as they did a magnificent job at slowing the game down at some points to a painful level. Then we had the TMO decided to have his cameo and reinterpretation of the rules; that was the ones that were being applied. Um, sort of.  I feel sorry for anyone new to the game as they would have been wondering if the rules are made up week to week.

So it’s pretty clear this is not about the way the Rebels played.

But that doesn’t help with the fact that if it’s hard to watch then who will want to watch it? That question led me to some uncomfortable home truths we as a game need to contemplate.

The Rebels attracted a crowd of 8393 which is concerning noting they have a population of over 4.5 million to work with. Of more immediate concern was the ratings. The Top of the table Rebels at home, in the prime-time slot for most of the Eastern states only attracted 2000 more viewers than the all Kiwi affair played at 5:30pm on Saturday.

Read in to it what you will but it does tend to suggest that people are wanting to watch good rugby first and foremost.

Beyond that the Rebels, even with their good performances don’t appear to be attracting much interest. Maybe some of the other factors I mentioned above are contributing to that or are the divisive ramifications that RA was warned about now coming to reality?

Performance or product? Whatever the reasons one thing those rating are telling us is that Aussie rugby is at times hard to watch and not that attractive; and certainly not appealing.

Tries of the Round as voted by us

There were some simply brilliant tries this weekend, highlighting the skills, smart thinking and intuitive play of those involved

This one highlighted a number of skills Barrett has. Kick, chase, gather – some may say he got a lucky bounce, but with skills like his luck doesn’t come into it much.

From the same game we see Ben Lam being barrelled over the sideline by about a dozen Highlanders players – all with the same colour boots! But thanks to the TMO deciding to have another look, we have another great try.

More kicking, from the Jaguares this time. Should we be surprised they have some smooth soccer skills?

A shame it came so late in the match, but this length of the field, solo try to Daugunu was pretty awesome.

The Rebels get in on the action too, with this great long range, team try finished off by Meakes.

And I’ve saved the best (in my opinion) for last. Vince Aso scored an absolutely brilliant try in the corner with all sorts of acrobatics involved. This has to be a contender for try of the year, and not just for the spectacular finish. The lead up work was also outstanding.