The Beale at Fullback Experiment 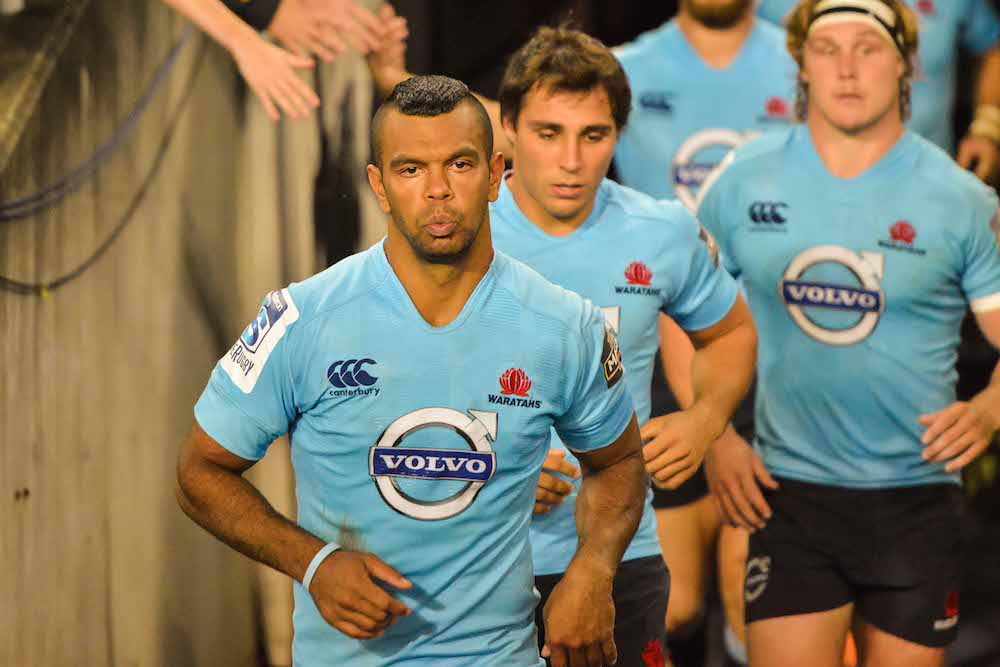 The Beale at Fullback Experiment

In their game against the Reds on Saturday, the Waratahs played Kurtley Beale at fullback for the first time since 2014. The only time Beale has played at fullback since then was during 4 tests in the Wallabies’ 2017 spring tour when Israel Folau took a break from rugby. Beale has mostly been played at inside centre by both Daryl Gibson and Michael Cheika, who have tried to maintain a consistent 10-12 playmaking combination with Bernard Foley.

The issue is that running a playmaker in the 12 jersey is old-fashioned. It reeks of Australian rugby traditionalism. No other tier 1 nation runs a second playmaker at inside centre, and if a second playmaker is utilised at all they usually inject themselves from fullback. Beauden Barrett (when Richie Mo’unga comes on at flyhalf) and Willie le Roux did this for New Zealand and South Africa last year, but most nations prefer a single playmaker. Instead, a crash ball runner is usually played in the 12 jersey such as Bundee Aki (Ireland), Ngani Laumape or Sonny Bill Williams (NZ), and Ben Te’o (England). 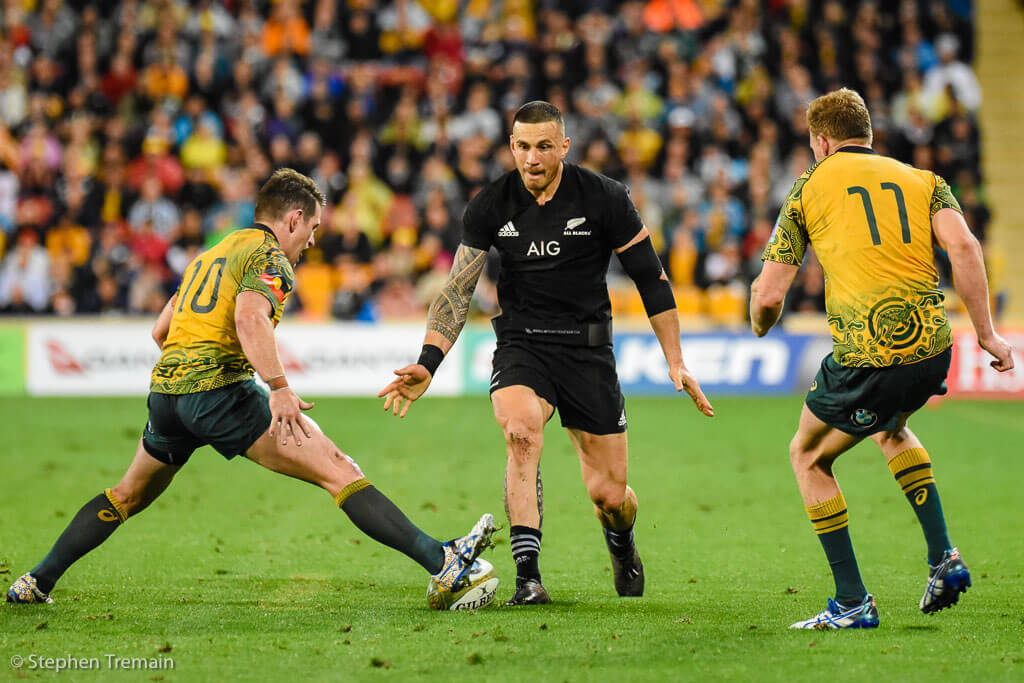 Sonny Bill-Williams, for the All Blacks, relying on bulk more than play-making skill

Probably the main reason the Wallabies and Waratahs persist in running Beale at 12 is that Foley hasn’t been up to the standards of a world-class playmaker. During the 2017 spring tour when Beale was at fullback, Foley struggled with the sole playmaking duties. He continues to be played there due to of a lack of alternatives (at least as perceived by the Wallabies selectors). This year may be different due to the return of Quade Cooper and Matt Toomua to Super Rugby.

As a result of these factors, playing Beale at fullback is a very important experiment. Nowhere on the rugby pitch is there more space than at fullback, and it frees up the 12 jersey for a crash ball runner. The Waratahs utilised Karmichael Hunt in this role on Saturday. At the national level, Samu Kerevi and Tevita Kuridrani both spend a lot of time wearing 12 for their Super Rugby teams even though Cheika prefers them at outside centre.

So how did Beale fare at fullback this weekend?

For this assessment, I will use 5 criteria which are based on the primary duties of a fullback:

4 minutes into the match (below) Beale covers the last point and injects himself into the attack by running a good angle inside Hunt, who smartly feeds him the ball. Beale is taken just short of the line and has to reach out, causing him to lose the ball. 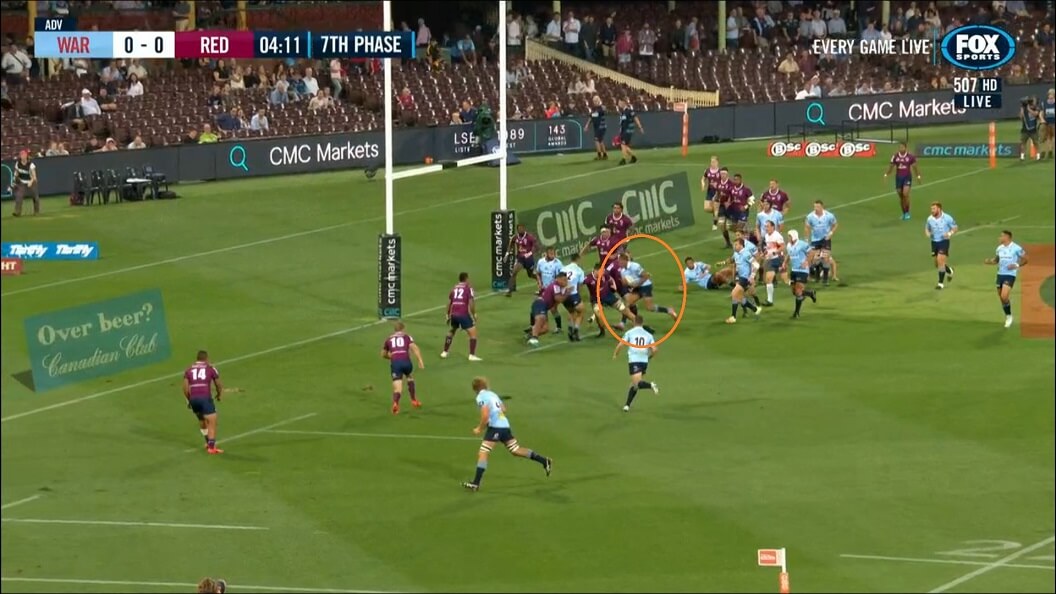 The problem here is that the roles are the wrong way around: Hunt should be crashing onto the inside ball fed to him by Beale. It’s likely that a larger player with more experience finishing like Hunt would have scored this try.

This issue is the same at fullback as at inside centre: Beale is smaller than other Australian options such as Hunt, Folau, Tom Banks, and Dane Haylett-Petty. While he has bulked up in recent years, even the 2 foreign playmaker fullbacks I mentioned above are taller than Beale. Sadly, Beale’s ability to effectively inject himself into the attack and to counter-attack from fullback is curtailed by his size.

To make up for this, Beale would have to be incredibly potent at playmaking from fullback. In the 6th minute, however, Beale slots into the line at first receiver, with Foley at the inside centre position (below). Folau can be found further down the line inside the man on the wing (Hunt, who is actually the inside centre) as if he were playing fullback. 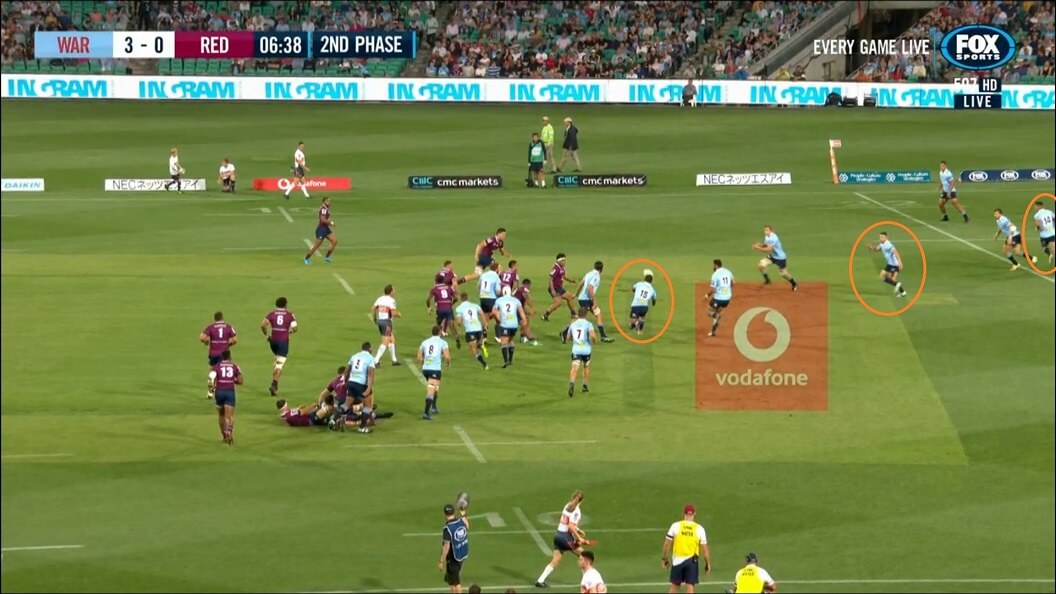 This tells us that Beale’s positional change is not a strong mandate, and is in line with the “fluid” positional plays of the Waratahs and Wallabies. He does this more often than not throughout the game and it prevents us from discerning what he would truly be like playing a proper fullback’s role in 2019.

Beale shows good fullback positional awareness and mobility in the 11th minute (below) to be far enough back to cover a potential kick while still being able to support Folau when he nabs an intercept. If the intercept were not taken, Beale would have been in the defensive line quickly enough to cover the winger and prevent an overlap. Beale cements this observation by repeating this effort in the 46th minute. 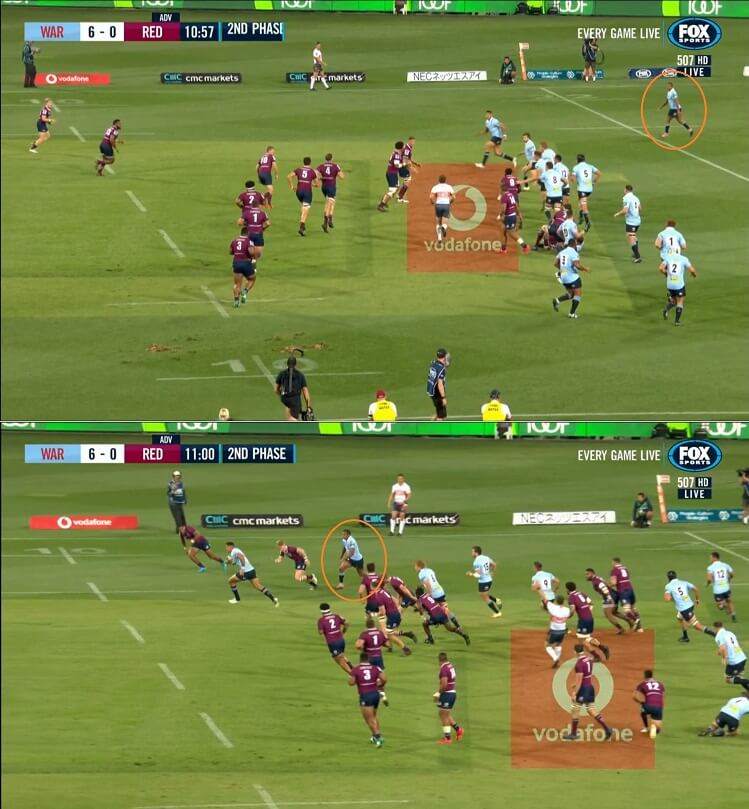 The Reds score their second try after creating the overlap pictured below. Curtis Rona is forced to defend against Isaac Lucas, Kerevi, and Chris Feauai-Sautia. The play begins more than 40 metres out from the Waratahs tryline, and the best option is to concede some ground while trying to force the Reds to the sideline by not committing too hard to the tackle. 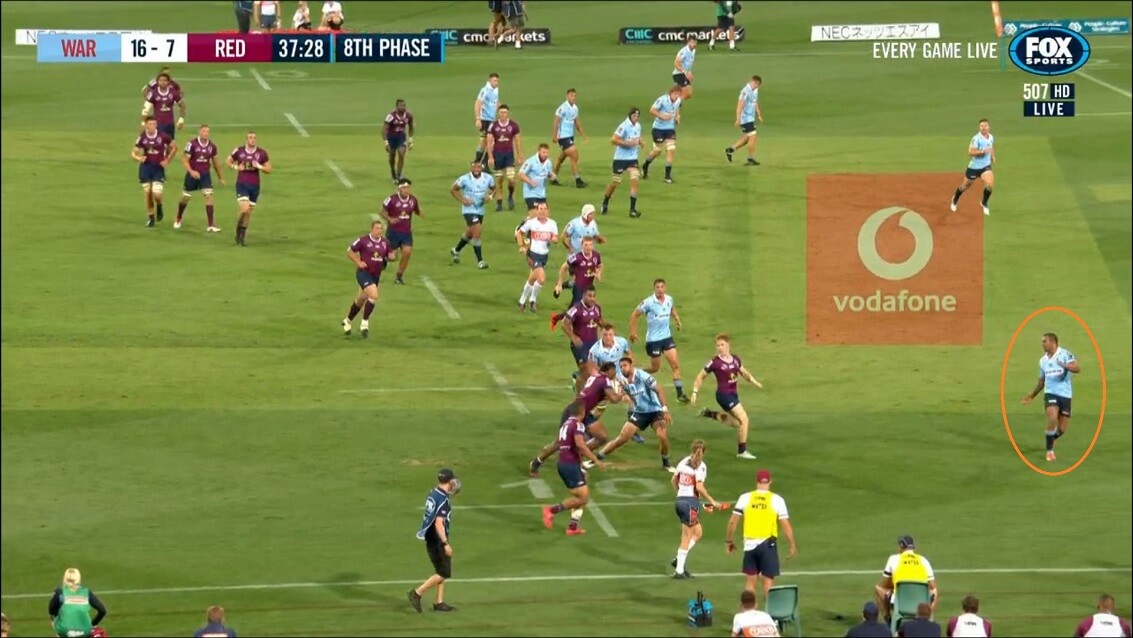 Rona understands this and gets Lucas to make the pass to Kerevi while trying to keep himself in the contest. Beale immediately views the situation as a 2 on 1 with himself against Kerevi and Feauai-Sautia. He comes to an almost complete stop and commits himself to Kerevi, who puts Feauai-Sautia in unopposed (below). 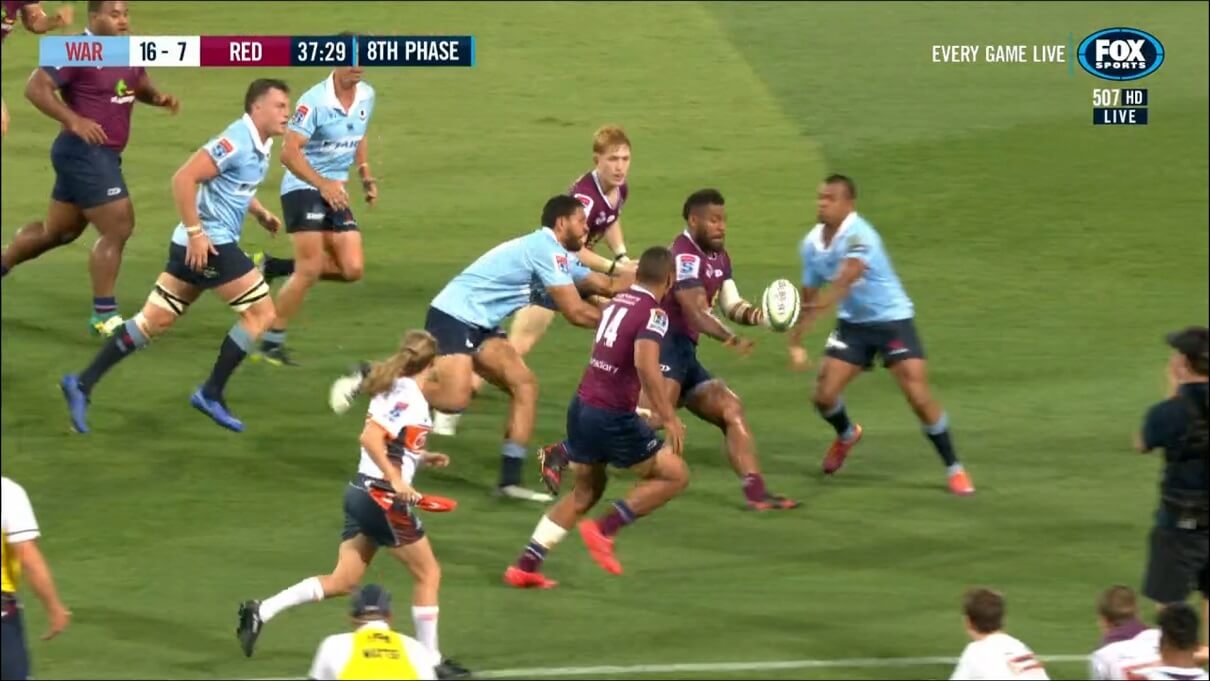 This may be a bit harsh, but in my view a more experienced fullback would not commit themselves so early. By running sideways/backwards and conceding some metres, Beale could have potentially provided time for the cover defence to make the tackle. The Reds pull this off against Beale in a later example. Rona was also jostling with Kerevi who may have needed to make the pass even without Beale’s intervention, or with a non-committal intervention.

The reason this is a harsh call is because Kerevi is such a physical player that it is difficult to bring him down without fully committing to the tackle and because he knows how to run straight rather than allowing himself to be forced to the sideline too easily. However, it draws attention to Beale’s known defensive frailties. At inside centre last year Beale had only a 66% tackle success rate compared with Folau (79%), Haylett-Petty (88%), and Banks (69%).

Another example occurs in the 65th minute (below). The Reds have created a massive overlap and Beale comes up from fullback to close it. 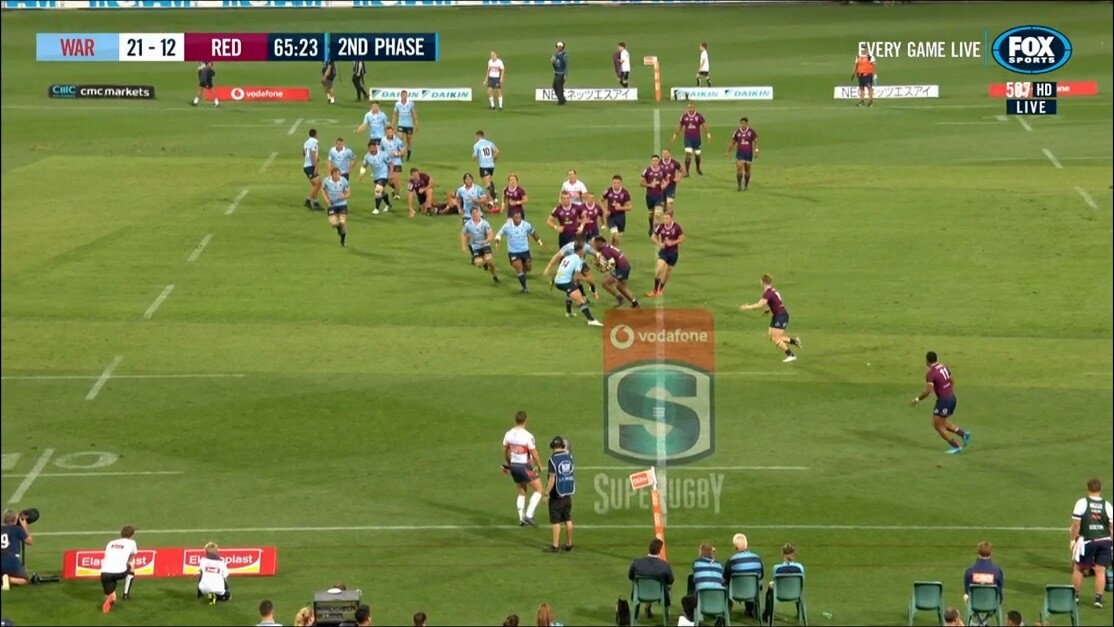 Bryce Hegarty sees that there is no one behind the Waratahs defensive line and puts the grubber through for Sefa Naivalu (below). 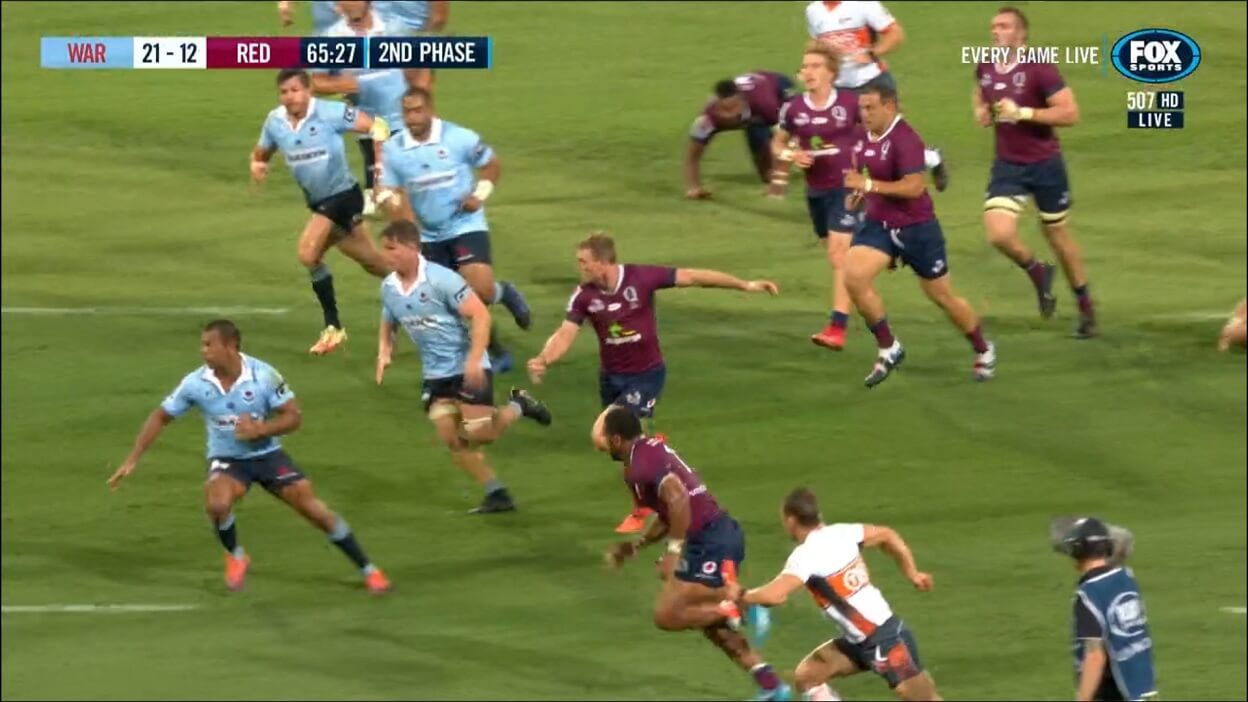 Beale does not have the speed of a typical back 3 player and is easily outpaced for the Reds’ third try (below). 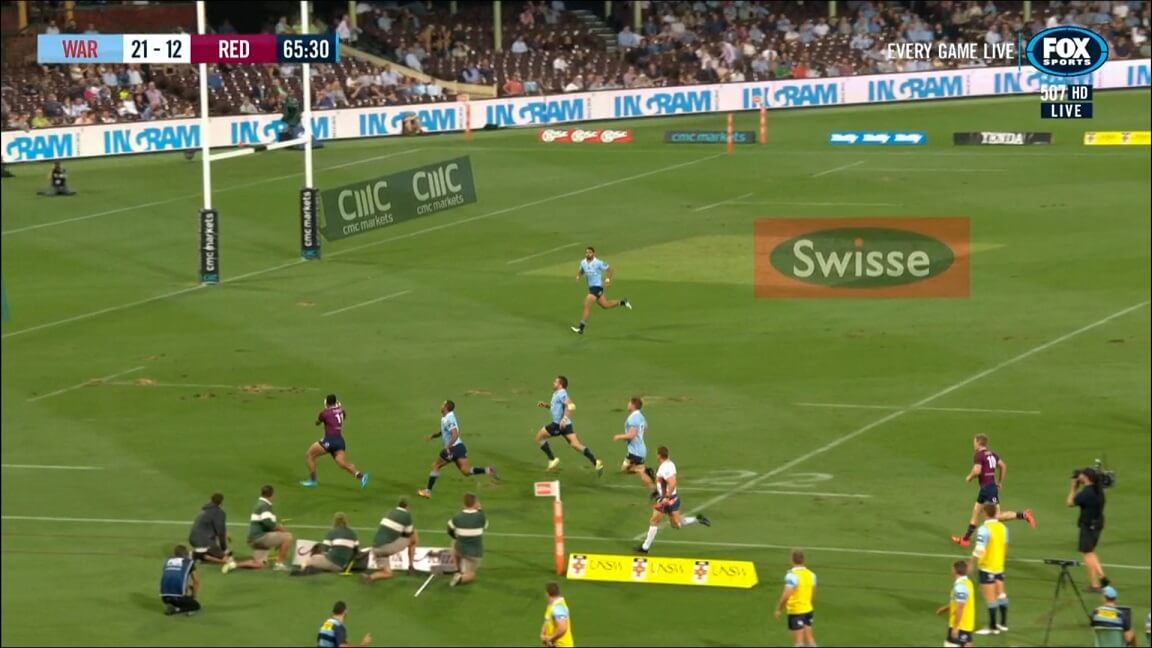 In the opening play of the second half, Beale takes a return kick and draws two Reds defenders before making the pass to Rona. Rona runs 40 metres and scores. While Beale did well here, this try is more a result of the inept Reds defence and Rona’s speed than any special counter-attacking skills.

I previously discussed a lost opportunity where Folau ran sideways and then threw an inside ball to Jack Dempsey against the Sunwolves rather than simply running straight, drawing the man, and then making the pass on the outside to the unmarked Curtis Rona. A similar situation occurs in the 68th minute of this game.

In the below image, Beale receives the ball (in the 12 position) about 17 metres from the sideline. There is a clear 4 on 3 overlap in the 20 metres of space from the sideline channel. Beale simply needs to straighten and draw Hegarty (10) to put Hunt (12) and Michael Hooper (7) away on the outside with only Feauai-Sautia to mark them. Folau (14) should draw Higginbotham (8), and if Higginbotham commits to Beale then he can put Folau away on the inside. 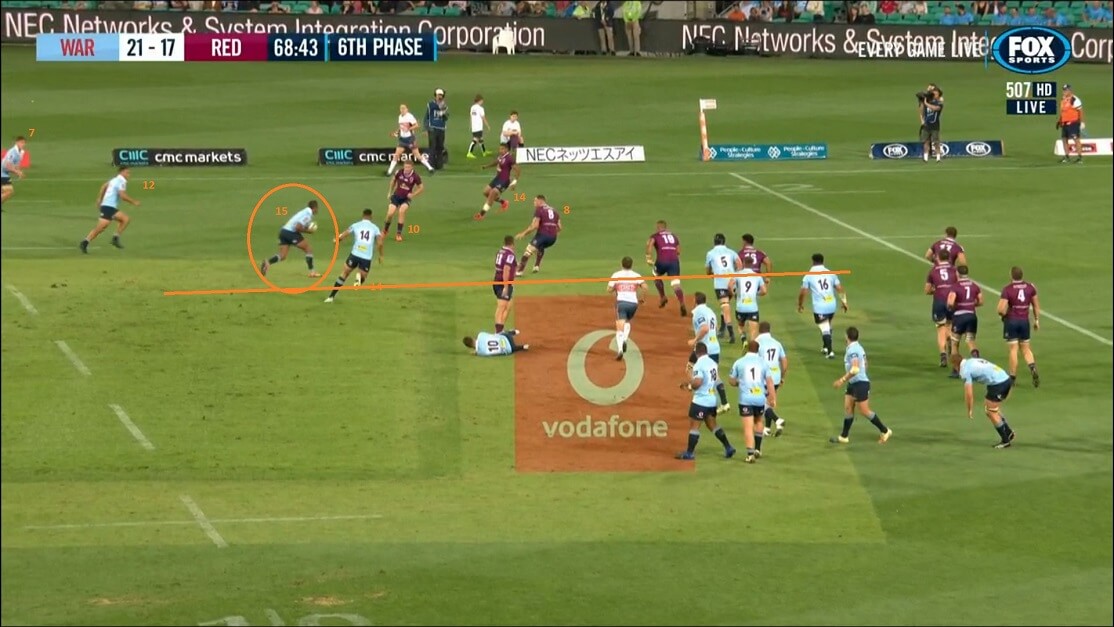 Unfortunately, Beale runs about 10 metres sideways and the Reds intelligently concede some territory to allow their sliding defence to catch up (below). The opportunity is lost. Beale throws the inside ball to Folau but he is now marked by Caleb Timu (19). 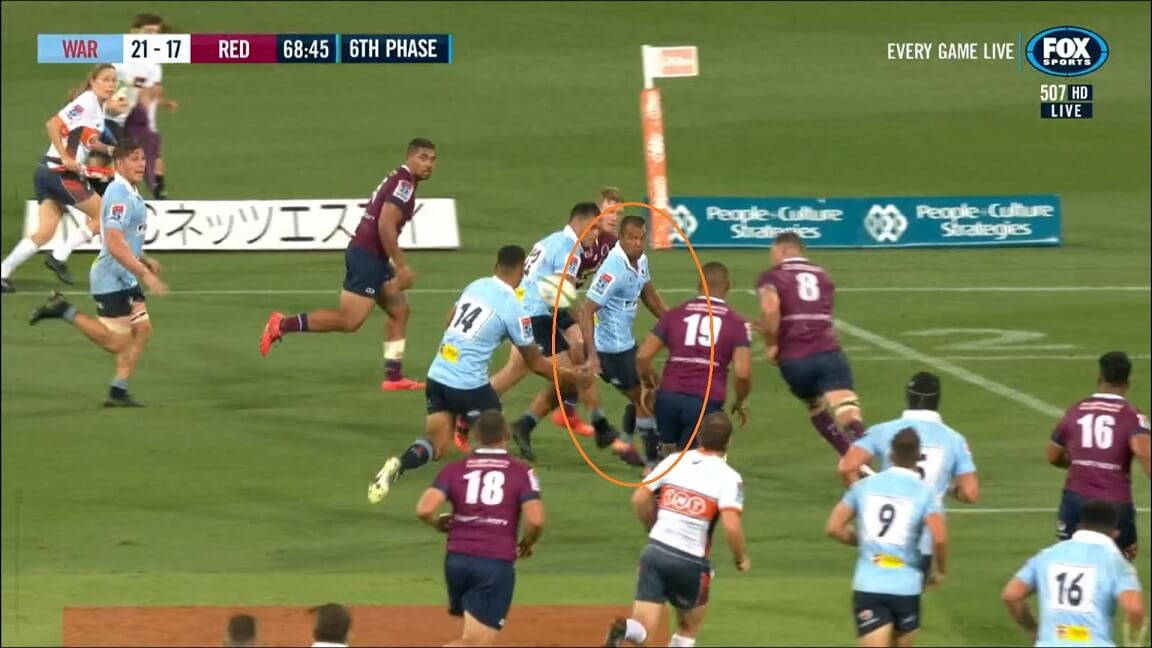 The result of this experiment is inconclusive leaning towards negative. Beale is no longer fast enough to operate in the back 3, and though he has bulked up in the last few years to mitigate this he is still smaller than other Australian and international fullbacks. We never get an opportunity to see him under the high ball, although his kicking game is a notable strength.

Coupled with one of the lowest tackle success rates in first-class rugby and a tendency to run sideways (not a good counter-attacking feature), what evidence there is seems to indicate that the Wallabies would be better served by playing a specialist fullback instead. This would see Beale relegated to the bench or the NRC, or more likely continuing to play at 12 where his combination with Foley can continue to do damage – even if this style is outdated.