Taking another look at a Rugby Origin Series 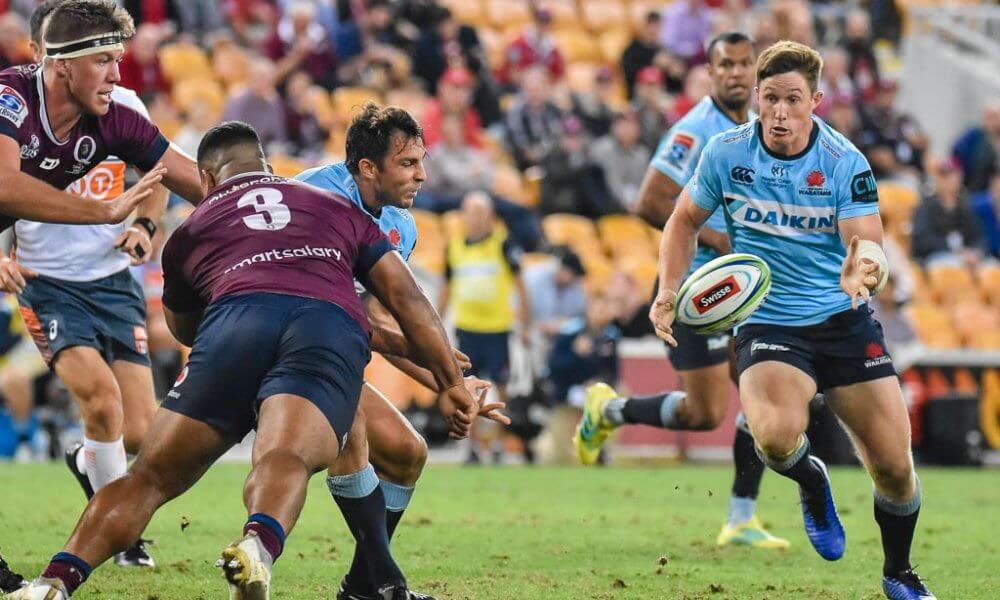 Taking another look at a Rugby Origin Series

Hamish McLennan is the most recent addition to the Rugby Australia this week, and as Chairman-elect, he came out last week to float a few ideas for the sport in this country.  Most seem to focus on that troubling middle tier of the sport, but it’s early days, so let’s not judge things yet.

One of the concepts he suggested was a State of Origin series, stating that he had pushed for this back when he was CEO and Managing Director of Network 10, back in 2013-2015.  It’s obviously not the first time the concept has been mooted, usually as we look on longingly at the amount of hype around the league version.  Various journalists and administrators have pushed it at various stages, without it ever really getting anywhere.

Hell, we’ve even done it here at GAGR.  I had forgotten that I had written a piece on the concept back in 2010 while Nick Hartman broke it down a bit more in 2017

I was going to preface this with an attempt to share the history of the Origin concept, particularly in a league perspective, but I’ve basically covered that off in my previous article.  So let’s get to the nuts and bolts.  If we were to do an Origin series, what were our eligibility be based on?

It’s caused a lot of gnashing of missing teeth among league fans with the likes of QLD born Peter Sterling playing for NSW; NSW born Greg Inglis playing for QLD and PNG captain Adrian Lam playing for QLD.  Things seem to have been tightened up more recently, but more about that soon.

I looked at a few options.

Firstly, an origin team based on place of birth.  But this is a ridiculous premise not least because it rules the likes of Harry Wilson, Jordan Petaia and Taniela Tupou out of the Queensland team.  Putting aside the parochial nature of this, basing any team solely on where a person is born is clearly ludicrous.

Next I looked at where they undertook their high schooling.  Like it or loath it, where a player went to school still seems an important factor in the Australian rugby arena.  But looking further than that, those teenage years are crucial towards a player’s development, whether it happens at school or otherwise, which makes this a feasible consideration.

Finally, as recommended by some on twitter, I looked at where they went post school.  Basically, at the time when they could make their own decision to play, where would that be?  It seems the closest to league’s first senior game of football approach, and I think it can work here.

League, however, have adapted and now look at a number of factors, as the below graphic illustrates. 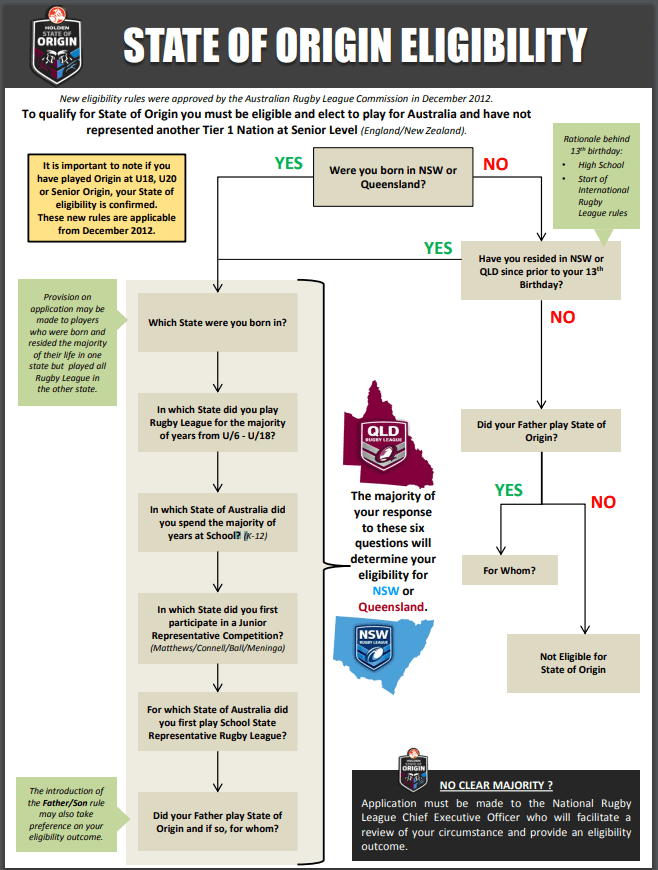 In trying to apply this to rugby, we get some simple decisions and then some tough ones.

This is the easy stuff.  These are players who were born, went to school and played rugby post school in the same state.  There’s no questions here about where their eligibility sits.  This is the Michael Hoopers, Ned Hanigans, Kurtley Beales,  Tate McDermotts, Angus Scott-Youngs and Alex Mafis of the world. 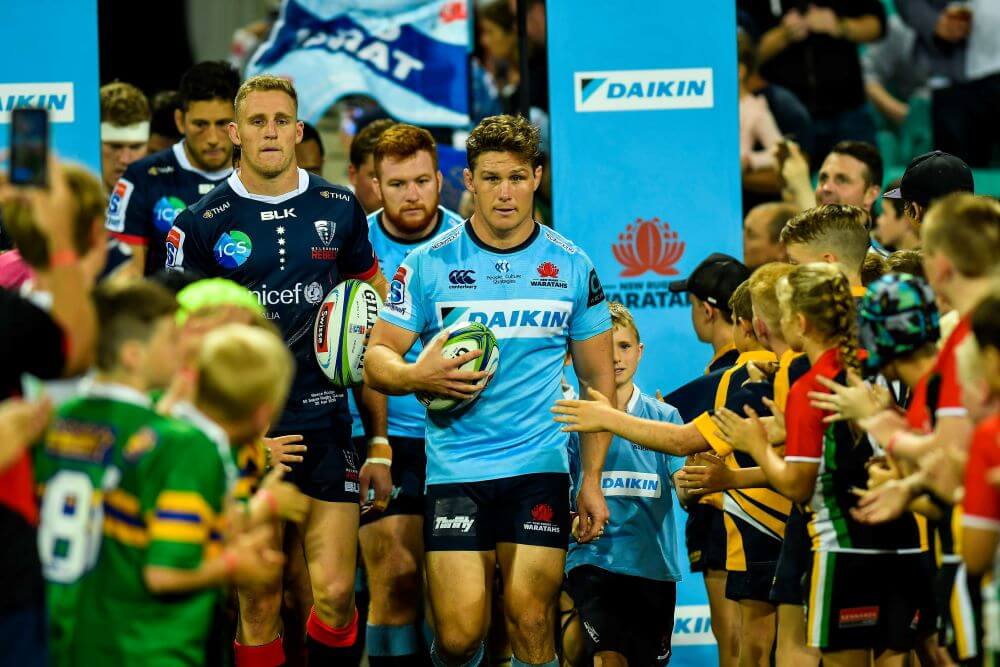 This one is, again, pretty easy.  They may have been born interstate, but they moved pretty early and, in turn, played most their junior footy in a different state usually incorporating school.  So a Tom Robertson who was born in New Zealand but moved to NSW or the aforementioned Harry Wilson who got the heck out of NSW when the getting was good and set up in Queensland.  As before, the eligibility is really pretty clear here dependent, of course, on future moves. 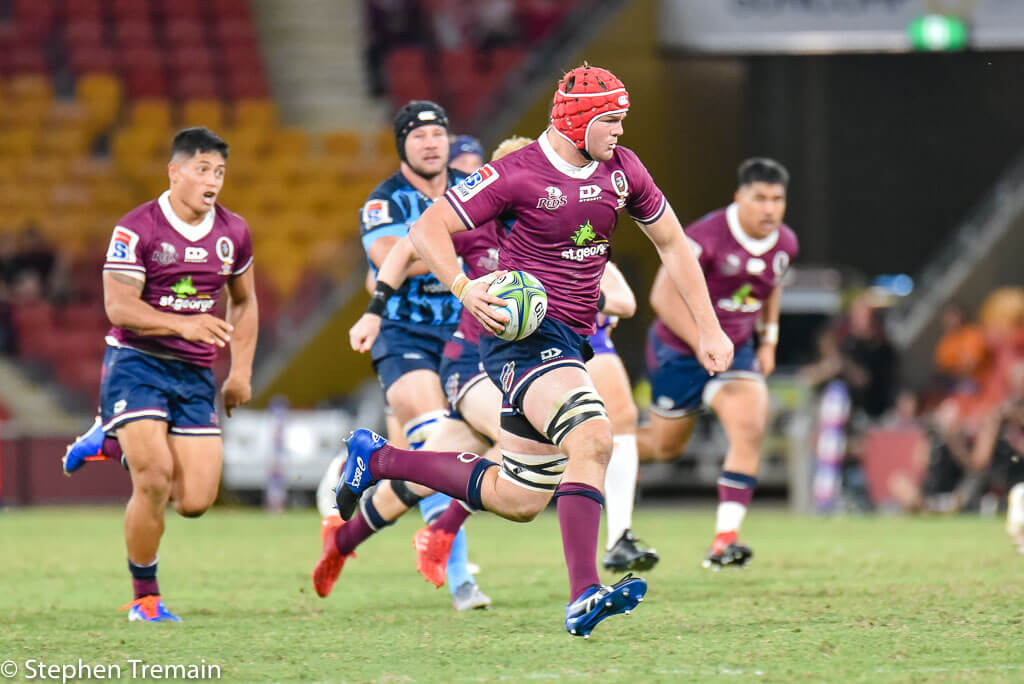 Came for school and left:

Then there is the smaller group of players, born in one state but moved elsewhere for school, normally on a rugby scholarship, but then moved again on graduation.  There are a couple of interesting examples here.  The big unit Trevor Hosea from the Rebels was born in Victoria, moved to Brisbane to go to BBC and then headed stragiht back home.  That’s a fairly clear case of a Melbournian.

How about this one though? Reesjan Pasitoa? He was born in Western Australia, moved to Brisbane to go to Nudgee College for a few years, and was signed straight from school by the Brumbies.  Who does he qualify for? If you go by the rule that its where he first chose to play rugby, then he’s a Canberra lad.

But how does that fit with Luke Jones? Another schoolboy star who signed young.  Born in NSW, schooled in NSW but then signed by the Force and played his first senior footy over in WA.  Does that tie him to WA?  It’s a similar story to James O’Connor. 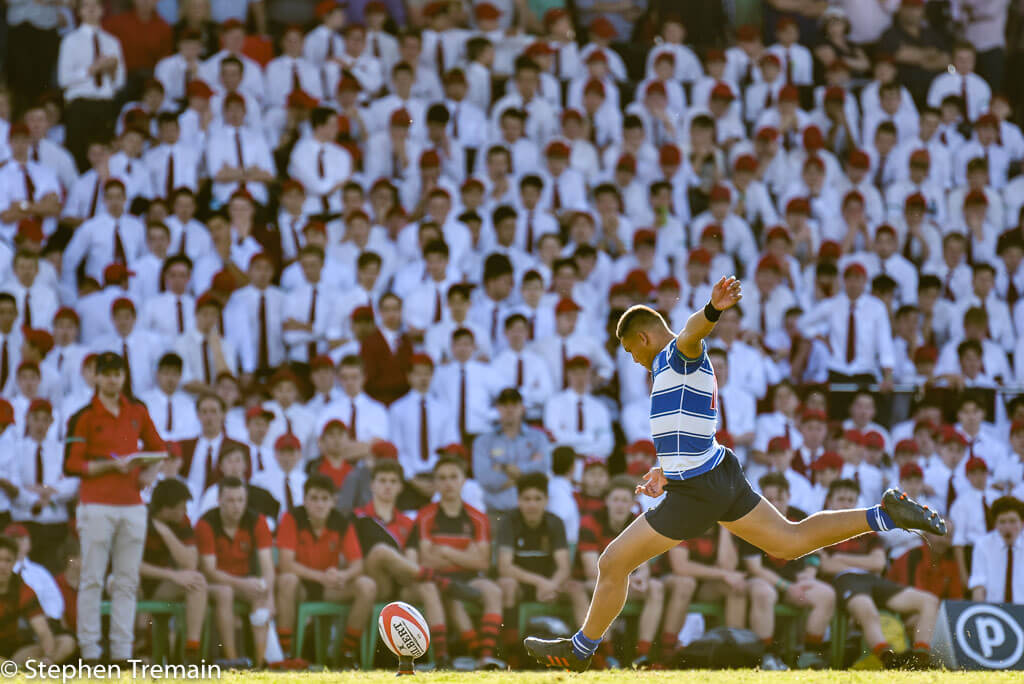 Australia’s strong migrant roots are evidenced in our rugby teams and most decisions are pretty easy here it would seem.  Despite for his question support for the Blues league team, Taniela Tupou is a Queenslander.  Likewise Henry Speight, despite coming here well after school, is a Canberra lad.  But there are some tough ones. A little more convoluted is Isi Naisirani who was born and schooled in Fiji, but came and played club footy in Brisbane, then went to the Force and then the Rebels. But he’s a QLDer I reckon. 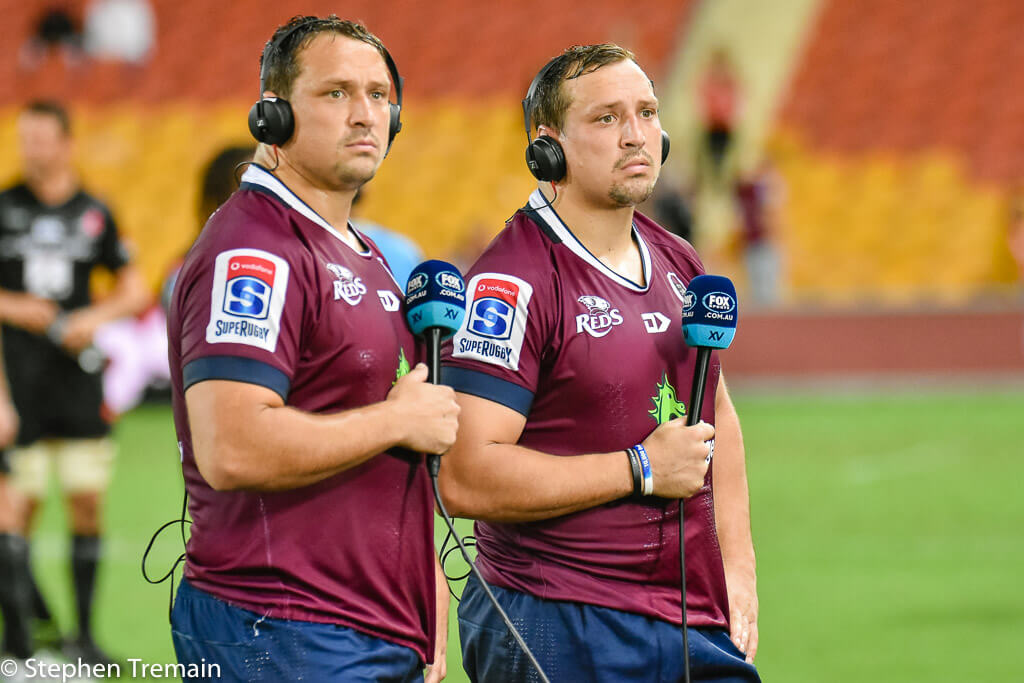 So I’ve made some assumptions which I hope pretty much align to common sense and, like the league, is slightly slanted to Queensland’s advantage.  Let’s say this game is played later this year perhaps as a necessary replacement for cancelled international test footy. As such all players are back from injury and, the COVID-3, Harry Hockings, Izaac Rodda and Isaac Lucas are unavailable for selection.

What the Waratahs would give to have that tight five now!

So I think that would be a pretty great clash.  I’m not convinced that it would be so much of a higher standard than Super Rugby, although this NSW team is a lot stronger than the current Waratah team while Tom Banks and Isi Naisirani are big “ins” for Queensland.

I wonder what the players think? Is Slipper really chomping at the bit to pull on the maroon jersey again to take on the arch enemy? Likewise, is Salakai-Loto salivating about getting to finally wear the sky blue Tah jersey to rip in to the likes of Tupou and Blythe?

Perhaps I am being controversial here, but I think the (or my) REAL interest for a State of Origin series is a three-way series between ACT, Victoria and Western Australia. The standard of players isn’t as high, but am I wrong in thinking that these players may actually get more of a buzz playing Origin footy and representing their own ‘non-traditional’ states?

In selection there are perhaps a few liberties taken, most significantly with the ACT team. Ikitau, Toomua, Loloesio, Swain, Wagner, Waight are all interstate products (all doing their studies in QLD) who moved to Canberra straight after school.  It is no different to James O’Connor really who went to WA straight from school.

For the sake of depth, it works that these lads represent ACT and there is an argument for either.  In the end it could be up to them as to which team they want to represent.   On the flipside, the WA team was pretty easy as depth has been built through the relocation of some stars interstate and the Force remaining an entity. You could even make a case that Luke Jones would be eligible to play for them, as he was another schoolboys signing. 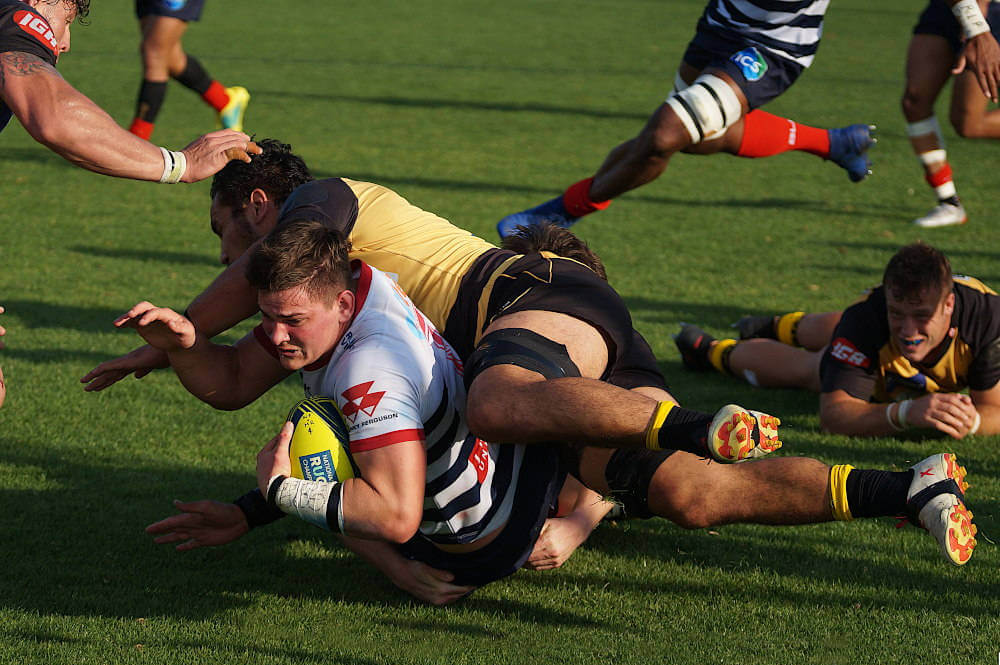 The teams would be:

Now tell me that wouldn’t be a hard fought three way series! The challenge will always be around depth and injuries to key positions, but I would want to watch that those games without a doubt.  It wouldn’t be higher quality than Super Rugby I wouldn’t have thought, though I’d expect it to be higher than NRC, if only because there would be something to play for. There would be passion for the jersey.

Ok, so I got a bit carried away and picked a QLD A and NSW A team as well.  If the broadcast gods are desperate for more content then perhaps these guys can have their own clash sometime, or even take on ACT, VIC and WA. Anyway, here it goes:

And there we have it.  Some rugby talk for you. I have no doubt the comments will be filled with people pulling apart my assumptions and calling out the inconsistencies around selection criteria.  But stuff it. At least it closely resembles footy talk.

As such – go for your life.  Is the Origin concept worth pursuing? What is the model that would best suit it? And if you really want to go there, which selections did I get wrong and what should they have been?