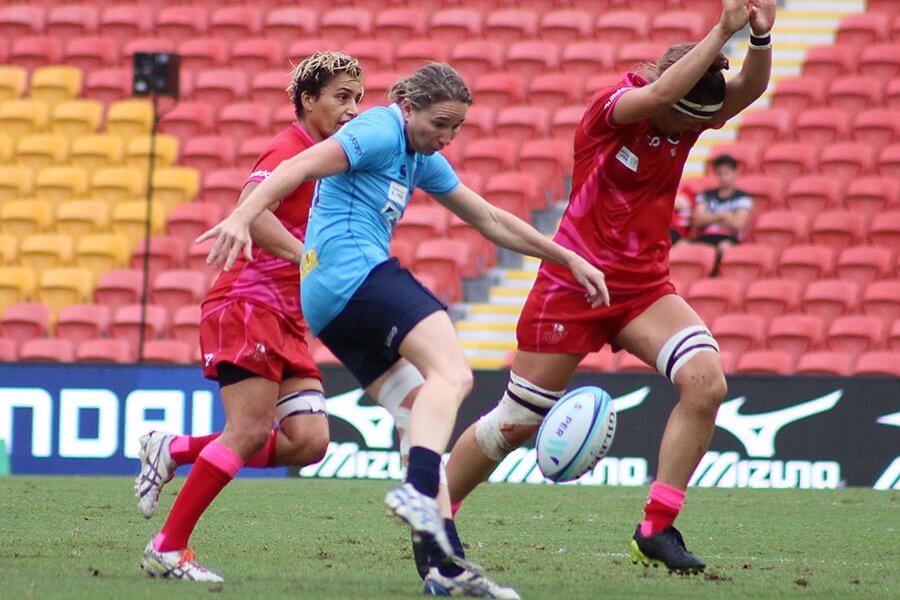 If you missed the ladies performing at the International Global Tens earlier this year give yourself an uppercut and go and read Reg’s preview of this game to get onto the same page of the rest of us. I for one have been hanging out to see a woman’s competition. Not all of us are built for the speed required to play 7’s. Some of us are built for strength and the dark arts. This competition finally provides an outlet for the tight five’s. (Oh to be 25 years younger!)

With the teams being mainly amateur you would have to be a serious women’s rugby follower to make a prediction. The Reds team comes complete with ten Wallaroo capped players, and if you count the ring in from across the dutch, 11 players with international experience. Captained by Kirby Sefo they come up against a NSW side captained by fellow Wallaroo Ash Hewson supported by three more of their Wallaroo teammates.

But NSW had some revenge in their sights. Having been beaten in the Global Tens final but the Reds they were out to level the score.

The first few minutes of the first half was taken up with each team feeling out the other. The rain just before kick-off kicked the humidity off a notch so the handling from both sides was a bit messy.

The first score was put on the board when Ash Hewson converted a penalty for NSW after the Queenslanders were caught off their feet 20 m out.

In the 14th minute, NSW got the first try on the board. After QLD was penalised at a scrum, NSW took a quick tap and handed the ball to Chloe Leaupepe who showed some quick stepping style to get through the QLD defence and dot the ball down. Hewson missed the conversion but still, NSW had the lead at 8 – 0.

That is how the score remained until halftime was called a minute & a half early due to what appeared to be a serious injury to Nareta Marsters. [She was cleared of any serious injury and returned to sit on the bench sporting six new stitches. Do guys dig scars? Chicks certainly do.] 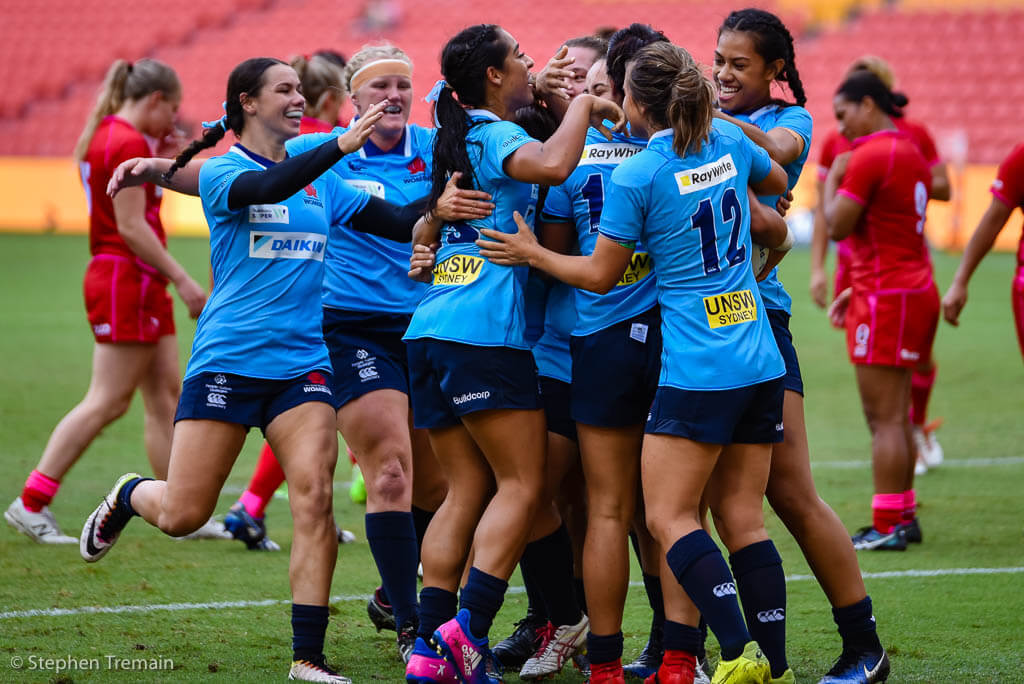 The second half was all NSW. NSW crossed the goal line 3 times but dropped the ball each time due to some heavy defence from the QLD women., The only thing worse than NSW’s luck in getting the ball down was QLD’s handling in trying to get the ball out of their territory.

After what seemed like an age of trading penalties and scrums NSW eventually crossed the line through Atasi Lafai. Hewson kicked the conversion and NSW were up 15 to nil in the 55th minute.

Service then returned to normal with NSW hammering away at the try line, losing the ball and returning for more. Eventually, in the 74 minute, Hewson had had enough and converted a penalty goal to take the score to 18 – nil. And that is where it stayed to the end of the first game of the Buildcorp Super W competition.

If QLD wants to be a force in this competition they need to sort out their game. They struggled in attack in particular and in the second half they made no incursions into the NSW 22. QLD defence close to the try line was superb, evidenced by the fact they held out at least five NSW tries in the second half, however, NSW seemed to be making metres at will in midfield. With one game under their belt, it will be interesting to see what improvements they can make in the next few weeks.

The NSW side appeared well drilled in attack and defence. The ball was slippery and I can only imagine how sapping the humidity was on the field but they were unlucky not to at least another 10 points or so on the Queenslanders. Well done to them they deserved the win. 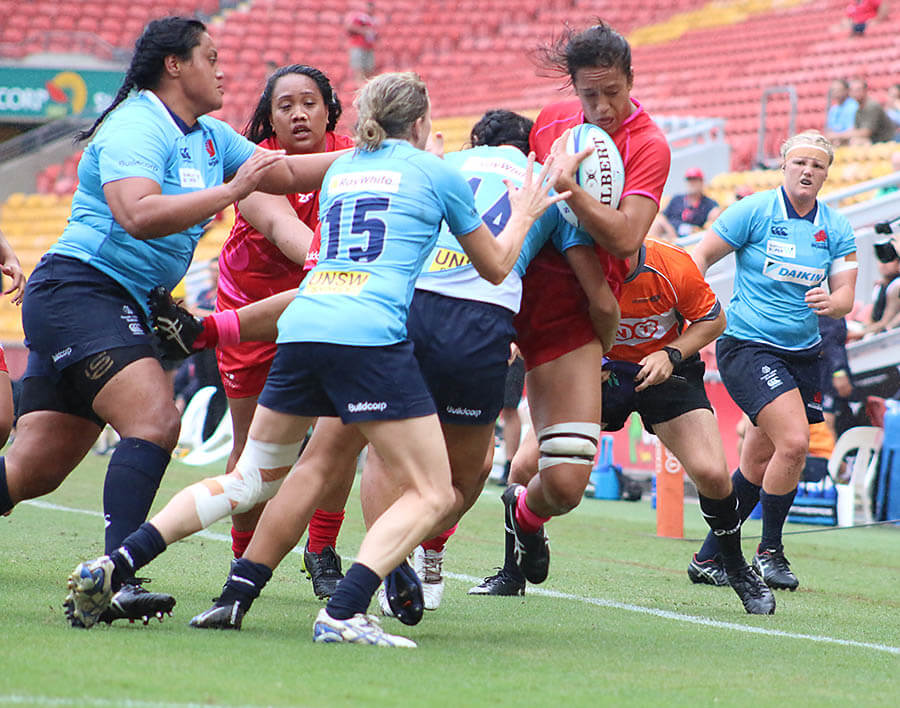 Reds captain Kirby Sefo gets driven out of touch

QLD’s lack of attack is going to be a real issue. NSW had done their homework and managed to disrupt any chance of the strike weapon by the name of Alysia Lefau-Fakaosilea getting the ball. The QLDers seemed a little lost.

Has to be Ash Hewson. Led the NSW team with aplomb and made her mark with the boot. Honourable mentions to Lefau-Fakaosilea from QLD and Chloe Leaupepe from NSW.

You could do worse than naming Lefau-Fakaosilea in your backs. Starting on the wing and then moving to the centres in the second half after the departure of Marsters she didn’t get many opportunities in attack for the trademark big hits in defence were there and she was responsible for preventing NSW scoring on more than one occasion. Other than that, the usual suspects (previously capped Wallaroos) showed their experience with playing the big games. 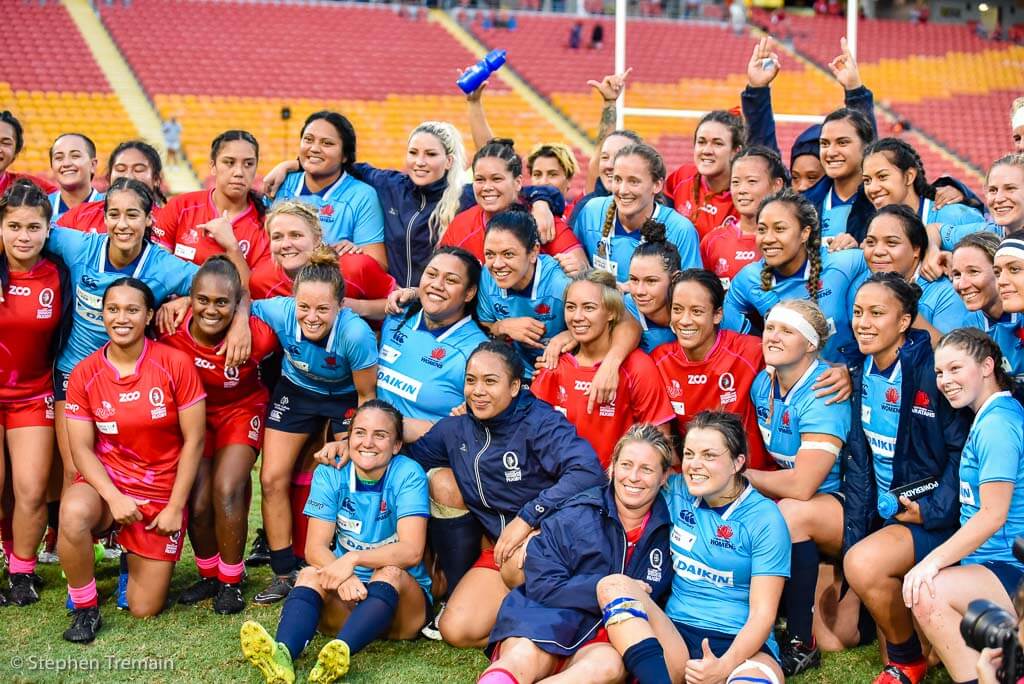 NSW and QLD pose for a post-match photo