Scotland won a must-win game in the last breath 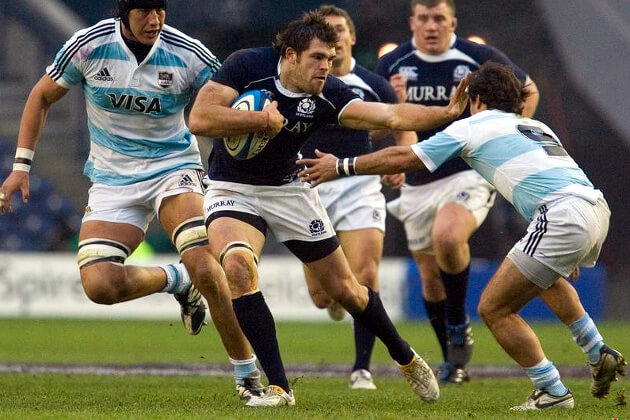 Scotland won a must-win game in the last breath

The first half of the game was a slow grinding affair more akin to a game being played in the mud. Argentina conceded a penalty at the breakdown that allowed the Scots to the first points on the scoreboard through the foot of Greig Laidlaw. Both teams made a lot of errors and were suffering from taking poor options. It was not until the 25th minute that the next scoring opportunity presented itself allowing Laidlaw to add another 3 points to the Scots tally.

The game continued in the same vein without much action in the red zone and no one really looking likely to muster a try. One minute before the end of the first half Los Pumas were presented with their first scoring opportunity with Nicolas “the puppy” Sanchez converting the penalty shot.

After a mundane first half the second half started to show some potential signs of life. Four minutes after the resumption Sanchez converted another penalty equalizing the score 6 all.

After the kick off Los Pumas were working their way into the game, and launched an expansive attack sparked by Juan Martin Hernandez “the magician” who, showing his class, made a stunning cross field kick to the waiting hands of Matias Orlando, with “the Tucumano” out running his opposition, crossing for the first try of the game at the 50 minute mark. Sanchez made the conversion and Los Pumas were up on the score board for the first time in the game.

The Scots were certainly not done and continued to attack, hitting back 4 minutes later. Sean Maitland scored the first try for the Scots after some poor defence by Argentina. Matias Orlando missed his man which opened up a gap in Argentina’s defence allowing a soft try. Laidlaw was successful with a difficult conversion from the corner levelling the score at 13 all.

The game resumed with great intensity on the part of both teams with both coaches looking to keep their momentum and started looking to the bench for fresh legs. On the Scotland side, Ryan Wilson and Peter Horne entered, replacing Magnus Bradbury and Huw Jones and on the South American side Leonardo Senatore and Tomas Cubelli came on in place of Facundo Isa and Martin Landajo.

At the 63 minute mark Sánchez converted another penalty taking his team to a slender lead by 3 points. That was short lived with Laidlaw converting a penalty less than 5 minutes later. At the 78 minute mark Laidlaw had a chance to put the Scots in the lead but kicked wide but fortunately would get a chance to make amends after the siren and this time his kick was on target, sealing a win for the home team in a nail biter.

This was an important victory for the Scottish team in the battle to climb places in the World Rugby ranking. It also leaves a wounded Argentine team the challenge of bouncing back next week against a formidable England that remains undefeated under Eddie Jones. The Pumas must beat Europe’s No. 1 contender if they want to get a victory in United Kingdom.

Sean Maitland’s try brought the Scots back in to the game at a critical time allowing them to keep pace with Los Pumas and grind out a win.

MAN OF THE MATCH

Greig Laidlaw was without a doubt one of the key players in the win. His composure at critical times and reliable boot were key to the victory.

All Blacks get revenge in Dublin
Italy make history in Florence