The Melbourne Rebels, decimated through injury and player departures, played their best eighty minutes yet in a brilliant attacking display against the unbackable Bulls at AAMI Park on Friday. While the Morne Steyn-led Bulls were too good in the end, claiming the win by six points, the ovation awarded to the home side by the 12,112 fans after the game, on a putridly cold night, said it all. This could be the start of something special.

This game was supposed to be different. The Rebels went into this game without five of their ideal starting XV, with Laurie Weeks, Jarrod Saffy, Adam Byrnes and Tom Chamberlain all injured, and Julian Huxley withdrawn at the last minute due to a back injury, his place at 15 taken by Richard Kingi, which elevated Lloyd Johansson to the bench. Their form had been average and inconsistent at best, awful at worst. The Bulls, meanwhile, had not been bested for a month and, on paper, looked far too good for their Melbourne counterparts. 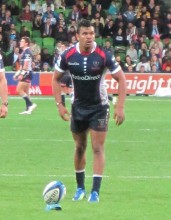 Making my way up to the press box, I listened in on a few conversations from the punters on my way. Apart from one positive young man who was convinced that the Rebels would make the line, the general consensus around the ground was that the home side was in for a punishing.

Indeed, it looked to be heading that way after kick-off, when the Bulls opened the scoring in the seventh minute. Looking to expose the Rebels on the wings, a position where they are traditionally very weak, Zane Kirchner made the line break and pushed it out right to Akona Ndungane, who made light work of the run to ground in the corner. Morne Steyn looked ominous right from the start, slotting the conversion from touch with ease. 7-0 to the Bulls.

It was Lachie Mitchell who hit the brakes on any hope of a walkover from the visitors, forming an electric partnership at 12 with newly-minted number 10, Kurtley Beale, early in the game. Mitchell sucked in the defence and linked with Beale who made the break. The ball found Phipps who set it up in the centre. It was Rodney Blake who picked it off the breakdown and found the line right underneath the posts, making it 7-5. Kurtley didn’t miss and the scores were tied after 10 minutes.

The Bulls pushed and got the ball deep into their attacking area, but a penalty at a scrum 10 metres out allowed the Rebels to relieve pressure. The Rebels struggled in the lineout, as they would all night, and lost a bit of ground. Hugh Pyle eventually found the ball and found Kurtley Beale. A man quickly in his element at flyhalf, Beale orchestrated a move that nearly got your intrepid reporter kicked out of the press box.

Beale shook and shimmied his way through what remained of the Bulls defensive line, and, when he saw Cooper Vuna running in support, passed it off to allow the winger to put it down underneath the posts. The crowd went absolutely nuts, and I nearly broke a table. Beale converted again and it was 14-7, the Rebels were in front.

The Bulls again targeted Melbourne’s weakness out wide, Steyn sent the ball to the left and Bjorn Basson put it down in the corner. Again forced to kick from the touch line, Morne Steyn made the effort look laughable. It was all tied up 14-14 after 19 minutes.

The visitors continued to attack, being held from their line only by desperate Melbourne defending. A dangerous tip-tackle on Bjorn Basson saw Luke Jones earn a yellow card, and possibly a few weeks on the sidelines following his citing after the match. Steyn opted for the posts and extended his tally for the match, putting the Bulls up 17-14 after 25.

When Beale turned it over at the restart, the pink Blue Bulls continued their purple patch. Cooper Vuna was found wanting in defence as Morne Steyn evaded his attempts with a casual side-step. His try on the left-hand side gave the Bulls the biggest lead of the match, and another conversion made it 24-14.

The frenetic pace only increased as the half time whistle approached. The Rebels worked incredibly hard to get th ball into an attacking position, using the maul to the best effect I have seen in their two years. Again deep in their attacking area, Phipps took the ball, ran around the back and tripped over the line. Beale continued the match’s 100% kicking record, and the score was 24-21.

The Rebels conceded a penalty after the restart and the Bulls took the kick for touch. Again the Victorians struggled with the lineout, the visitors clinical in their drive, forcing the ball over the line in the hands of CJ Stander. The Bulls had the bonus point before the half, and with Steyn’s conversion, had a 31-21 lead.

Conceding this late would usually cause the Rebels to put their heads down, and a runaway win would ensue. Not this time.

The Rebels were foaming at the mouth at the restart, running the ball down with a newly-found intensity. In attempting to claim the ball, birthday boy Jacques Potgieter committed a dangerous tackle and conceded a penalty. The Rebels found the line as the hooter blew. 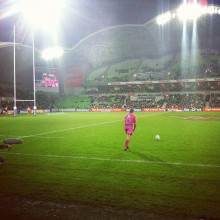 The home side won the ball back and pushed towards the line. The Bulls were lazy at the breakdown, conceding rucks far too readily and not retreating onside at the ruck. Several offside penalties later, Phipps found Delve after a tap, who spun around his tackler to score a brilliant try. Incredibly, the Rebels too had secured a bonus point before oranges. Beale kicked truly and the score was 31-28 at half time.

The second half slowed down a tad, but the fight was still well and truly in the match. It was the Rebels who looked brighter early on, showing a breed of attacking pressure not yet seen in navy blue. The home side forced a 5m scrum after Kirchner fumbled past his own in-goal and was forced to touch down. They were metres from reclaiming the lead when Vuna lost it forward.

The visitors pressed, claiming the lineout from the clearance against the throw with immense pressure on what seemed to be the Rebels’ major weakness. 60 minutes in, the Bulls knocked it on after claiming the ball, gifting the Rebels a scrum. The Melburnians would not hold it for long, Luke Jones conceding a penalty for not releasing. The ball found Steyn, who chased it down and calmly slid in to claim the 5th try for the Bulls. His conversion made it 38-28 after 62.

At 65 minutes, Melbourne welcomed back its captain, Stirling Mortlock making his first appearance in 2012. He instantly forced himself upon the game, setting up centre counterpart Mitch Inman for a line break. Inman made a great run and was stopped inches away from the paint. Cooper Vuna bolted for the breakdown, scooping the ball up and claiming a brace for the game, keeping the Rebels in it. Kurtley Beale nailed it and it was 38-35 after 66.

The Rebels had a massive chance to claim the lead soon after, with Mortlock forcing the ball forward again, and the Rebel line surrounding Kirchner, who ran the ball into touch deep in the Rebel attack. The Victorians, however, suffered again at the lineout, losing the ball at the drive.

The Bulls sensed a chance to seal it, and went for the kick for touch, knowing they could secure a lineout. The resulting drive put them deep into attack, and desperate defending from the Rebels resulted in a penalty for not releasing the player. Steyn kicked his seventh straight, extending their lead to 6 after 72 minutes, where it would remain until full time.

The Bulls deserved their result, of that there is no question. What will be intriguing, however, is what this will do for the Rebels. Their short history has been scattered with false dawns, performances that show what this team is capable of, but are followed by average and insipid rugby. It is an event so common, even the players acknowledge the ‘tradition’ of playing every second week.

This match, though, seemed different. There was nothing flukey about the Melbourne Rebels on Friday. They were not gifted any penalties or decisions – in fact, the referee was quite unkind to them over the course of the match. They showed a determination and hunger that I had not seen before. Their forwards played with a sort of freedom that they have lacked in other matches, the trust to know that your teammates have your back and you can play to a game-plan, and not fight every battle in a state of panic. Kurtley Beale made number 10 his own, relishing in the leadership role he had on the field, and you could see the effect his confidence had on the backs. It was incredible.

We may have to wait until next week, when the Rebels host the Crusaders, to really know if this was a drop in the ocean, or a line in the sand. Any other time, one would have likely said the former. After witnessing what I did at AAMI Park this week, I’m not so sure. I honestly believe this time could be different.

I can’t wait to find out.