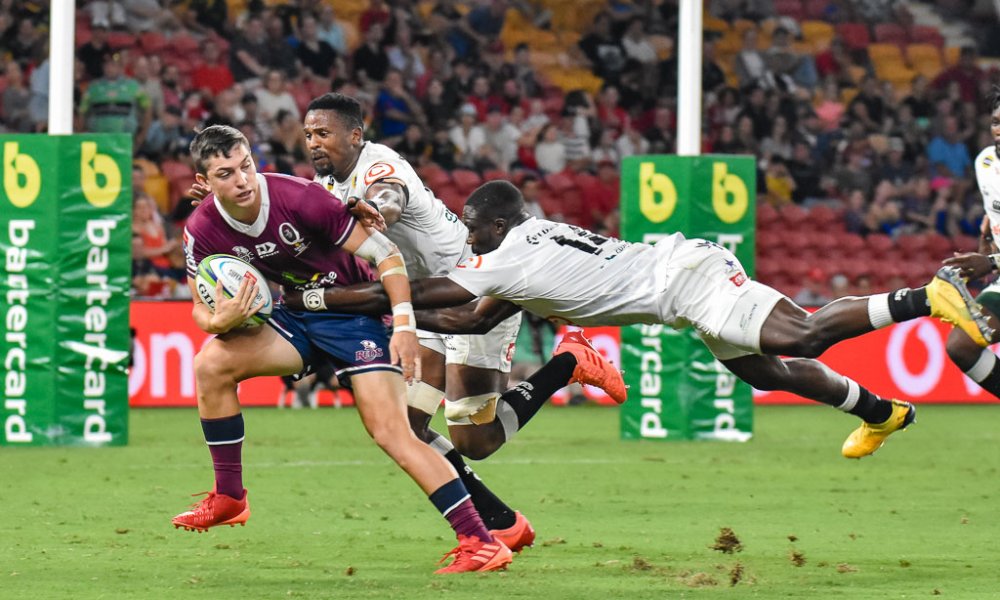 The Reds were under immense pressure as they entered their Round 5 clash against the Sharks.  Firstly they needed to back-up after their thrashing against the Sunwolves last weekend and to prove they were more than flat track bullies.  Second, they needed to follow the Aussie path of success this weekend on the back of Rebels and Waratahs upset victories.  Finally they had to follow in the footsteps of their red-hot Women’s team who smashed the visiting Rebels 104-3 in the curtain raiser.

For the Sharks, they were on their way home from a tour that saw them drop just the one game, to the Hurricanes in Round 3, while getting up over the Highlanders and the Rebels.  As it stands, it’s a bloody good trip. If they were to leave with three wins, however, it would be bloody sensational.

The Reds were able to assert their muscle early when they got the first scrum penalty on the Sharks feed allowing Jock Campbell to step and have an early shot at goal. While the scrum penalty wasn’t a surprise, the successful penalty shot was given recent form. Reds 3-0

It was an early blow for the Sharks but not as big a blow when their returning World Champion, and skipper, Lukhanyo Am was injured early.  The injury came from a low high tackle by his opposite number, Hunter Paisami. The tackle was high because Paisami’s shoulder made contact with his head, but it was low because Am was falling and Paisami really couldn’t have been in a lower position. Anyway, Am was soon back on his feet and the Sharks evened the scores with the shot at goal. 3 all.

The Sharks, who seemed determined to counter the hard running Reds lines by really pushing the advantage line, were giving away penalties but the Reds couldn’t get their lineout or rolling maul working and scoring opportunities were wasted.

While the Reds attacking lineout was not performing up one end, the defensive version was put under pressure soon enough too. A penalty at the breakdown gave the Sharks decent position from about 20m out. A clean lineout and a perfectly formed maul saw the visitors drive the Reds backwards easily with hooker Kerron van Vuuren getting the points.  Sharks 8-3

The Reds were able to bounce back immediately following a fumble of the kick-off by the Sharks.  The scrum gave Paisami his first set piece run opportunity of the game and he did just enough to get across the gain line and spur some quick phase ball.  When the ball was spread it looked like Campbell had erred in coming back inside, but a loop around by James O’Connor enabled him to find Henry Speight with space outside to score his second try for his adopted club this season. 8 all.

The lineout still wasn’t functioning for the Reds and with the kicking off Campbell a little iffy, why wouldn’t the Sharks push the law book a little?  They survived one attacking lineout, but a scrum penalty soon after gave the Campbell a much easier shot to put his team back in the lead Reds 11-8

The Reds malfunctioning lineout was a real worry for the home team as they repeatedly misfired and denied themselves legitimate point scoring attacking opportunities.  The Sharks were giving them plenty of opportunities to improve on this aspect of the game, but four turnovers at the lineout was proof of its malfunction.

The fast moving Shark defence was also doing its best to deny the Reds attack any space or time.  It was only when O’Connor and Campbell were able to get the ball wide, albeit on the bounce, to Speight was space able to be found.  A smart grubber forward kept the ball in play and a the Sharks cover through winger Madosh Tambwe was forced in goal giving the Reds a 5m scrum with the half time siren imminent.

Their only dependable set piece play provided a platform for a quick piece of interchange between Hamish Stewart and O’Connor that saw the veteran Wallaby over under the posts. Unfortunately the tap on pass by Stewart was deemed to have gone forward and the try disallowed.

The Reds would go to the break clinging to a 3 point lead but probably disappointed they weren’t able to convert more opportunities from a ropey lineout. 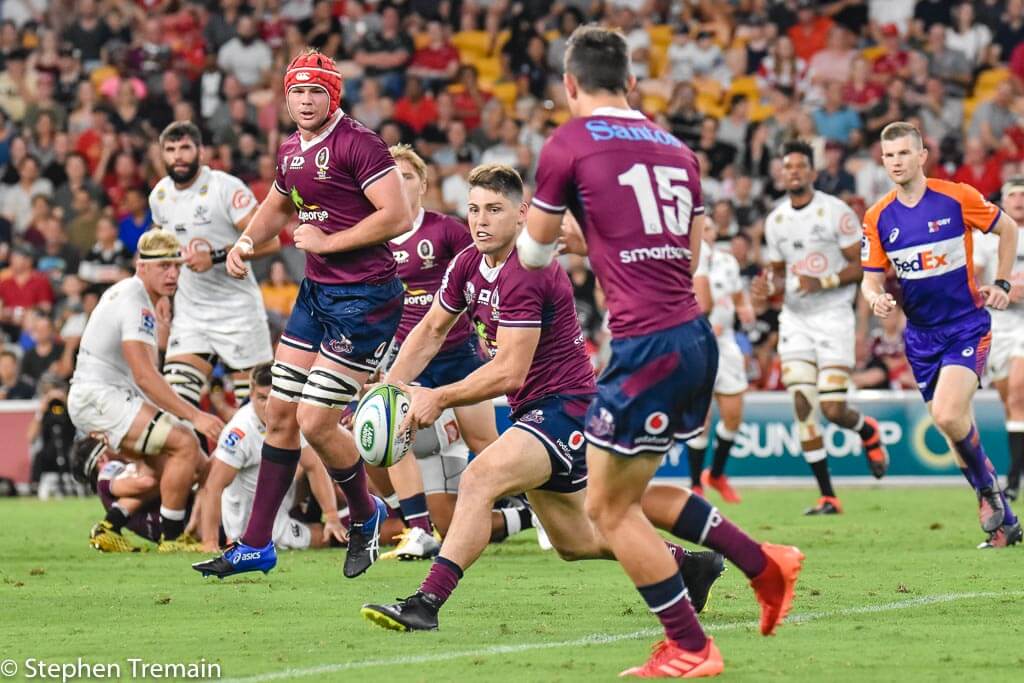 Did I mention the poor Reds lineout in the first half?

It wasn’t the lineout that let the Reds down early in the second half as the Sharks found space down the left side of a wide blind, from a scrum 40m out.  Some quick ball kept the momentum flowing and the Reds just couldn’t hold on.  Flanker Dylan Richardson was the one to get the ball over the tryline with Curwin Bosch kicked the conversion Sharks 15-11

Of  bigger blow for the Reds was Harry Wilson coming off for a HIA, after a tackle went wrong, soon followed by James O’Connor. Last year’s Wallaby Under 20s Fraser McReight and Isaac Lucas were the replacements.

Angus Scott-Young ran on top a nice Tate McDermott ball and was able to find Hamish Stewart in support on the inside.  With support in and out, it looked like a try for all money. Unfortunately Stewart’s awkward one handed off-load was loose and Campbell toed it forward.  The Sharks cleaned up through fullback Aphelele Fassi, however he was tackled over the line to give the Reds another attacking scrum, 5m out.

The try came and it came through scrumhalf Tate McDermott. McDermott has his powerful pack to thank as they again dominated the scrum and the 9 was ready to take the free kick quickly and charged straight through the Sharks to score.  Reds 16-15

Bosch bashed one over from 48m out to put the visitors back in front. Sharks 18-16

He tried to do it again, soon after following a scrum penalty when replacement Harry Hoopert failed to keep his feet.  It was a cracking kick with a greater angle and the lead was extended. Sharks 21-16

Another Sharks penalty from a scrum seemed to relieve the pressure with the Reds about 20m out from the line. But as the scrum broke up, so did a scuffle and the replayed apparently showed replacement hooker Craig Burden pushing his elbow into Alex Mafi’s throat. The penalty was reversed and from the resultant lineout Taniela Tupou burrowed over for a try.

Unfortunately the replay showed be probably did a little too much burrowing and was penalised for playing the ball in the ground, and the try disallowed.

The Reds still had the territory but their attack wasn’t overly convincing.  The rucks were messy and the Sharks were picking attackers off fairly easily. The pressure was released when Am snaffled a flat ball by his opposite number, Paisami, to run 70 odd metres and score a crucial try.  Sharks 28-16

That try was probably enough to shut the gate, but if it wasn’t then it was nailed shut soon after. The ruck work was again loose again and Richardson snaffled a turnover and offloaded to his No 8, Sikumbo Notshe who broke a number of tackles before the ball found Tambwe in space to race away and score.  Sharks 33-16

The Reds scored from a rolling maul through Ed Craig in the 88th (or so) minute on a back of a string of five penalties in a row in what was one of the more farcical scenes of this weekend’s round of rugby. More farcically Campbell booted it from the sideline!

As stated previously the 33-23 win makes it a sensational tour for the Sharks and they can head home with heads held high.  They now get to host the Jaguares next Sunday morning while the Reds will need a massive lift as they take on the Crusaders in Christchurch on Friday. 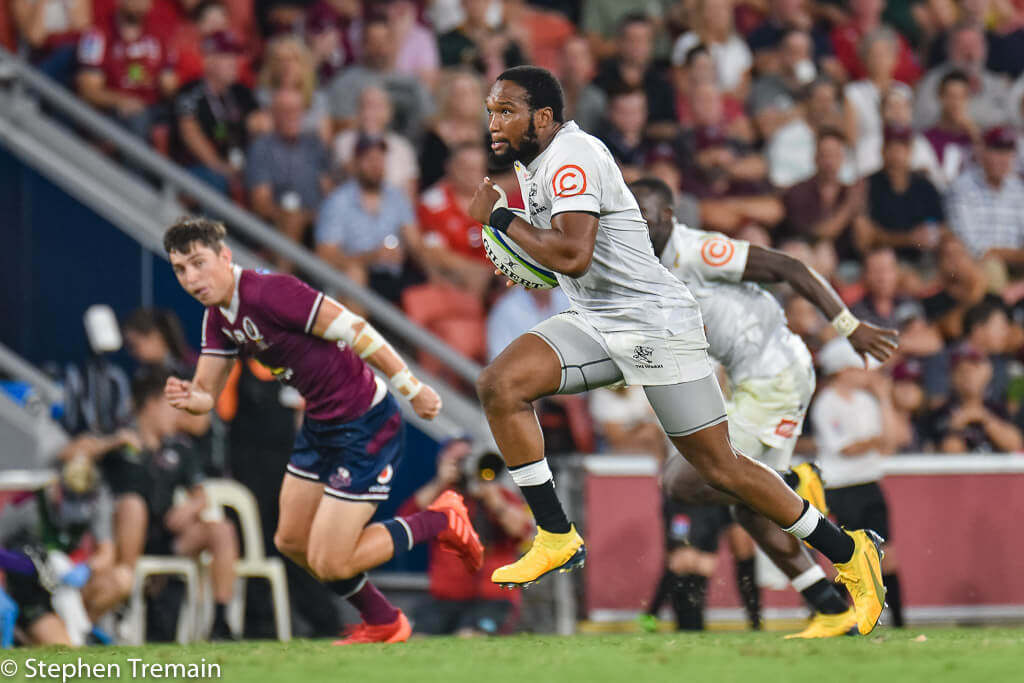 Lukhanyo Am takes an intercept to score

The Game Changer
It could have been when O’Connor and McDermott came off. It could have been Bosch’s big penalties or Am’s intercept.  But it was probably the Tupou no-try that happened just minutes before the Am try.  It was a 10-14 point turnaround.

Curwin Bosch controlled play well and his two monster penalty kicks were crucial. I thought the work of Dylan Richardson was exceptional as well while lock Ruben van Heerden was a big reason why the Reds struggled with their lineout.  Give it to one of them.

The Wallaby coaching team won’t be inking anyone’s name on the team sheet after that game.  Stewart was very solid, but that loose one handed pass was black mark.  The backrow worked hard by the rucks were a mess. The scrum worked well still.