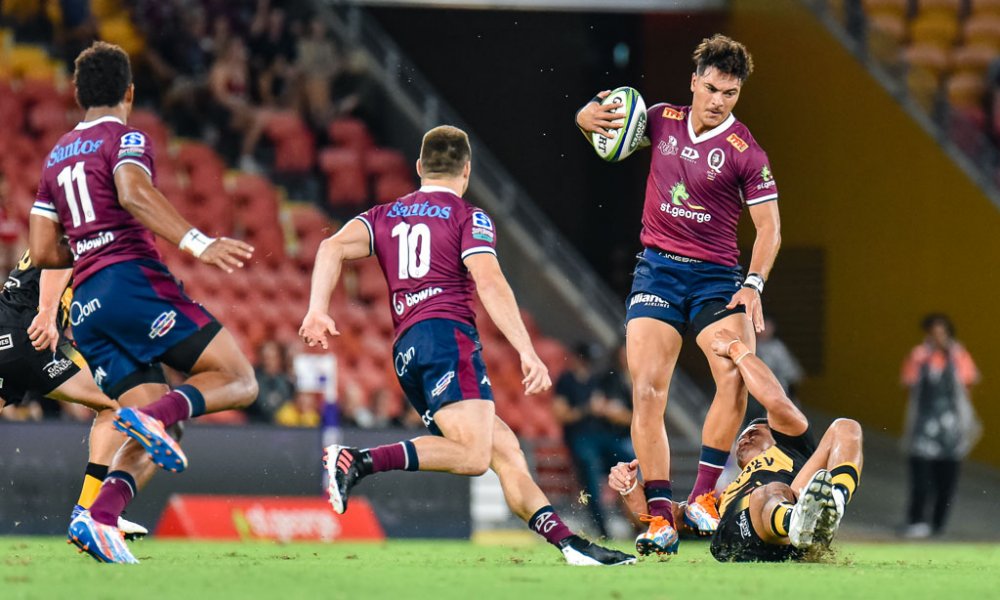 The rebels couldn’t overcome a three converted try and a penalty blitz in the first 16 minutes by the Queensland Reds. The rebels had the better of the rest of the first half dragging the score back to 24-14 that’s as close as they got with the Reds finishing six tries to three winners.

The Reds forwards dominated with Tupou, Wilson and McReight in particular popping up to cause havoc in attack and defence.

That platform allowed the Reds halves, McDermott and O’Connor to steer the team around with constant front foot ball.

The Reds looked like the only team who’d shown up for the first ten minutes of the game. Taniela Tupou scored their first after only two minutes in a typical barging run in close to the ruck.

Only two minutes later Hunter Paisami pounce on a slow pass from Hodge to To’omua to run 65 metres for the intercept try. After five minutes it was 14-0 to the Reds. After a penalty it was 17-0

Tupou scored his second try and moved to 7 on the all-time Reds scorers list in the 16 minute. This was a much prettier effort from 25 metres out after O’Connor beat the blindside maul defence and sent the big fella through a yawning chasm of a hole.

24-0 down, the Rebels finally decided they were here to play. Firstly Lomani cut the Reds to pieces up the right side for 24-7. Then he and Hodge combined up the centre for a beautiful long range effort with Hodge just managing to plant the ball over the line in the covering tackle. Halftime score was 24-14.

Another intercept, this time for Jock Campbell, lead to Fraser McReight scoring the first try of the second half. Campbell was run down by Hardwick, but quick ruck ball never gave the Rebels a chance to recover and McDermott put McReight through to stretch the score 31-14.

The scoreboard finally slowed down, but the rugby wasn’t any less entertaining. The Reds scrum depth started to tell with signs of dominance starting to appear. The Reds scored through Campbell in the left corner for a 39-14 lead.

The Rebels finally had possession in Reds territory, and they didn’t waste it as Wells bought the score back to 39-19 after a pretty lead up from his team mates.

Josh Flook put the Reds in bonus point territory in the 76 minute scoring off a Hegarty cross kick after Hodge spilled the ball in goal. That was the final score of the game with the Reds defeating the Rebels 44-19

The 16 minute scoring blitz at the start of the game that the rebels never recovered from.

Tanieal Tupou. The big fella scored two tries and had a pretty run in traffic that no prop should be able to deliver.