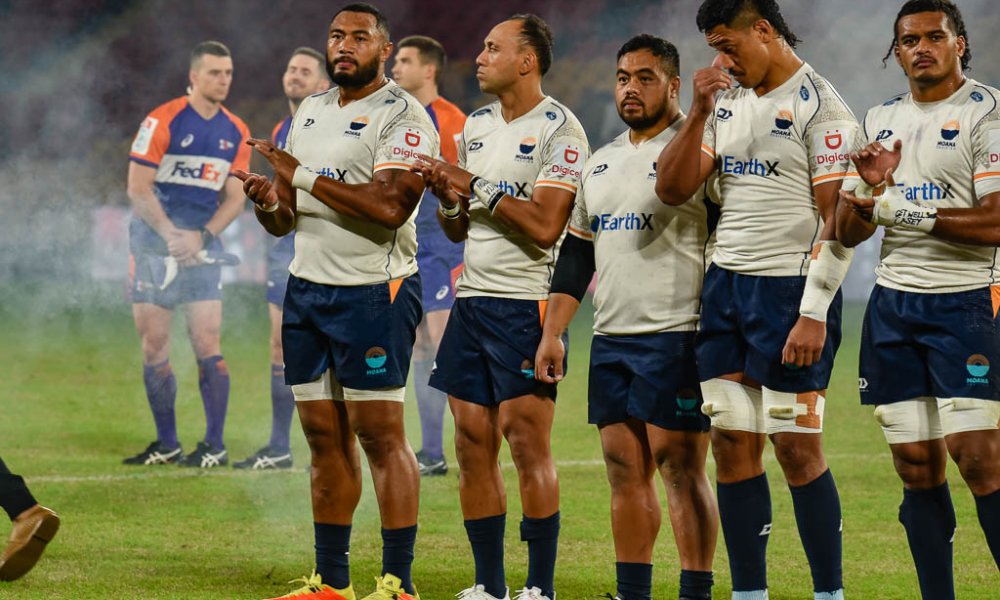 Welcome, G&GRs, to the rugby news for the penultimate round of Super Rugby Pacific before finals begin.

Today will be a recap of scores from Round 13, an update on the Sevens in Toulouse, pondering who might make the Australia A side and a call to action from a Canberra club.

Finally, before we get to the news… Canberra had one win this weekend with the probable election of David ‘Poey’ Pocock to the Senate. Bloody excellent!

Crusaders 61 v Fijian Drua 3: A tough ending for the Fijians in their first season. It’s always hard coming up against the Saders, especially at the back end of the season when, historically, the Saders are at their peak. The Saders have the Reds next weekend and Fiji have the Chiefs.

Chiefs 54 v Force 21: The wheels have come right off for the Force. A very disappointing season after such promise in 2021. Well done to the Chiefs for ensuring they’ll play finals footy. The Force have Moana on Tuesday then end their season v the Canes.

Brumbies 19 – Blues 21: This was quite a match. Yes there were some questionable decisions/non-decisions (as there are in every match at every level). I don’t think anyone can deny that… even me or KARL! That being said, and I’ve been saying it for years… the Brumbies are a ridiculously cynical side which is a hallmark of Dan McKellar’s coaching. While I’m personally gutted that we couldn’t hold on, the Brumbies lost this all by themselves. It’s not the first time we’ve lost matches after failing to secure and retain possession in the last minute of a match, either. Well played to the Blues who genuinely looked under the pump throughout the game. RTS and BBBB were the difference between the teams. The Brums finish their regular season against MP in Auckland and the Blues play the Tarts in Sydney.

Futhermore, I’m going to call out the Brumbies members here. They have been notoriously poor sports ever since I can remember. Indeed, I refuse to even sit within cooee of anyone in a gold hat at GIO Stadium such is my disdain for them. OK sure, show your displeasure by booing (as crass as it is). But the carry-on after the game which saw Murphy requiring a security escort off the field is disgusting. That is not rugby and is precisely why rugby, among other sports, has a crisis in the referee ranks. Pull your collective heads in, ya mugs! See below a letter from Queanbeyan Rugby Club President, Grant Jones.

Reds 34 – Moana Pasifika 22: The Reds looked relatively comfortable in their match against Moana. Unfortunately, the win came at the cost of JOC and Josh Flook. In a side ravaged by injury this was the last thing the Reds needed. Moana, like Fiji, are doing as expected, particularly with the disruption they’ve faced. They have a tough finish to their season with a Tuesday match against the Force then playing the Brumbies next weekend. The Reds have the Saders which is definitely a challenge.

Hurricanes 44 – Rebels 22: Another pantsing for the Rebels who never really looked in the game. Another failed season and serious questions about the coaching and structures of the Rebels as an organisation really have to be looked at. The Hurricanes are finding enough form at the right end of the season. The Canes finish their season against the Force and the Rebels play the Highlanders at home.

Highlanders 20 – Waratahs 32: Some Aussie blushes saved with the Tarts victory over the South Men. A silly red card threw the Highlanders off and they never really recovered. Well done to the young Tarts. This was a crucial win as it potentially spares the Tarts from facing the Saders in Chch (instead they play the Ponies in Cbr…). This Tane Edmed is continuing to look the goods. I wonder if the Ponies may well look to bring young Will Harrison down to Canberra to replace Banks…? Looking ahead to the final week, the Tarts have the Blues (a litmus test if there ever was one!) and the Highlanders have the Rabble in Melbourne.

The Australian Men’s and Women’s Sevens sides have topped their groups with remarkable performances in Toulouse. The women have already wrapped up the series before the final event, looking to cap off their remarkable run with a fifth title.

Meanwhile, the men currently sit in third position, eager to claim an elusive title after consistent podium finishes. Of particular note was the Men’s side defeating the Kiwis 29-14, both allowing the Aussies to progress and punting the Kiwis out in the pool stages! The Women have been on fire with wins over the USA, Fiji and a 50-0 hiding of the Bokke.

As an aside, I do wonder what it’ll take for Stan to get aboard the Sevens train and start to stream it…?

AUSTRALIA A AND THE PACIFIC NATIONS CUP

I’m delighted to see the Australia A team return this year, particularly within an opportunity for the Pacific Islands to get access to quality test matches and referees of the highest quality.

See here for the schedule of matches.

It will be quite interesting to see which players are selected for this squad. Further, will we see a mix of experience, say, with a Joe Powell type player, or a look at, say Ryan Lonergan? It’ll definitely be an interesting squad. If only there was time to have Australia A v English Saxons… now that’d be something!

Who do you anticipate being in the squad, G&GRs?

QUEANBEYAN NOTICE TO MEMBERS ON REFEREEING

Though I’m based in Melbourne, I was a former resident of Canberra and an ACTRRA referee. A few years ago, the association got the shock of our lives when a Queanbeyan player by the name of Grant Jones signed up to referee. By his own admission (see below), Jonesy was one of those blokes who gave referees stick… and, occasionally, even a bit more. This did see him front the chocolate wheel of justice a few times. Eventually, he realised it was time to put up or shut up. So he did his referee course and signed up with ACTRRA. Like all referees, he started off doing juniors and, to his credit, did really well (after a bit of coaching of course 😉). He even had a bit of a taste of his own medicine (albeit in jest) from some of his club colleagues when he happened to referee matches at Queanbeyan in juniors. Often, he did more than one match before his commitments with seniors. Eventually, the time came for Jonesy to have a crack at seniors. From memory, not only was he dakking himself, but he did a bloody good job. I had the privilege of referee coaching him on one occasion, too. Even more to his credit, he removed himself from refereeing Queanbeyan at this level to ensure there was no perception of bias. This often meant he was at one ground in the morning then rushing to wherever Queanbeyan was in the afternoon.

Why do I mention this? Well, Jonesy turned out to be one of those blokes who could change his stripes. He went from a serial pest to a bloke who did his club and ACTRRA proud. I’m sure that there are plenty of other men and women out there who could do exactly the same. The opportunity is definitely there, and you’d be welcomed with open arms!

If you would like to have a go, please email graham.cooper@rugby.com.au (Vic, SA, Tas, ACT), rohan.hoffman@rugby.com.au (Qld and NT) or alex.richards@nsw.rugby (NSW). Otherwise, check out Rugby Xplorer for details on courses. Please make sure you have done Smart Rugby as well.

Statement from club president on refereeing

It is great to be back playing, supporting and watching the game that we love. The frosty mornings and cold winds that we have started to experience sure does make it feel like rugby season.

Many of you would know that our game is suffering from a significant lack of match officials with a number of referees leaving for different reasons this year and no significant influx of people prepared to take up the whistle.

This being the case, it is imperative that we look after the ones that we do have and treat them with the respect they deserve, because as we all know, without them, we simply do not have a game.

It is unfortunate that I need to report of incidents involving individuals involved in both our senior and junior clubs not showing that respect to referees. One incident has seen a match official walk away from the game which is not only something that we cannot afford but also embarrassing for us as a club to contribute to.

I myself have been guilty of this type of behaviour in the past, something I am not proud of and something that I have learnt from. I get that at times when participating or watching a game that you care about, emotions can run high and that can result in saying something that is inappropriate in the heat of the moment, but it is not something that we should accept of ourselves or others and something which we should all be determined to improve.

As a club, we will not be accepting of this behaviour moving forward and will be taking action against individuals who are guilty of behaviour that is considered dissent or abuse of match officials.

We would like to encourage players, parents, former players and general supporters of our club to give refereeing a go. I myself have started to referee games in recent years and have found it a rewarding way to contribute to the game.

For current players or parents of junior players, anyone that is prepared to register with the referees association, complete the minimum requirements to referee matches and be appointed to and officiate 3 matches at either junior or senior level, the club will reimburse you the cost of you or your child’s registration fee in full.

If you do not fall into this category but are interested in giving it a go, we would be happy to talk to you about how we can support you in doing so.

There are also match payments from junior clubs or through the association for senior matches.

We look forward to everyone complying with the standards of behaviour that are acceptable and encourage you to either approach another person who is not compliant or let a club official know so that we can talk with that individual.

We want everyone to enjoy our great game and do it in a way that values our match officials and shows them the respect they deserve.