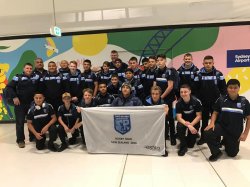 The Western Sydney Junior Two Blues (WSJTB) Under 14 side embarked on a tour of NZ in the April school holidays. The boys and parents along with coaches Daniel Smith, Damien Fakafunua and Sione Tonga started planning the trip around 2 years ago with the intent of playing open weight and top sides in NZ challenging the side as best they could.

The WSJTB u14 side has had a great run winning the 2017 and 2018 NSW State Championships. With over 34 boys playing for the two blues during this time the changes where a challenge for the district however the side has stuck together and kept playing great footy.

The trip was booked through Dean Michniewicz from Estillio and saw the boys travelling to Auckland, Hamilton and Rotarua.

One of the aims of the trip was to have the boys train, play and tour like a professional side. This included specialist coaching sessions by Auckland Rugby development officer and professional coach Nick Blundell.

The boys where hosted by Riffles College RUFC where we based the team for 4 days. During this time the boys were able to access the sensational Rugby facilities with accommodation training grounds and rehabilitation for the players all in the one facility. With 2 full size synthetic all weather pitches the players were able to train rail, hail or shine! 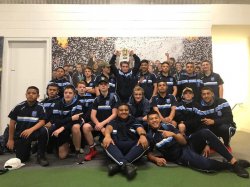 The boys played 4 games in 10 days against some extremely tough open weight competition. For the first time in a long time the teams systems and defences where well and truly tested. Even though the results went the young Two Blues way the scores did not show how physically demanding the games where and how tough the NZ teams played. They never gave up and kept playing hard right until the full time whistle.

A highlight of the trip was a full tour of Eden park and the chance to meet the Auckland Blues training staff and training venue. The boys also got to watch the Chiefs play in the Super Rugby!

A lot has been said about the state of Australian Rugby and how good the NZ Rugby program is. One thing the tour has proven to this playing group is that we can compete, learn from the NZ boys and also back our own systems and style of play. Not sure we will ever beat the Kiwi’s if we keep thinking they are the best! This young group of Rugby players certainly has the belief that one day they might beat the Kiwi’s at a higher level.

After speaking with Auckland Rugby the group plans on heading back to NZ to play some provincial rep sides or we may head to the UK for a northern hemisphere experience!!

Massive thanks to the coaching staff, our Kiwi Physio and all the teams we played and their welcoming attitude.

NZ we will be back.

Thursday’s Rugby News
Schoolboy side controversy may have silver lining