To progress to the semi-finals of the World Rugby Under 20 Championship, Australia had to beat the Junior Springboks in Calvasino in their last pool game, or at least earn a bonus point in a loss to become the fourth-ranked team.

Instead they were dominated for long periods by the young South Africans and had to struggle to contain the scoreline to 13-46.

The physical command by the Junior Boks was evident early when they choke-tackled the Aussie Under 20s and had their scrum running backwards for a penalty. After the lineout they advanced up the other side of the field and 6. Jacques Vermeulen scored too easily.

That was all in three minutes and after the conversion they led 7-0.

There was a change after the second South African scrum—this time they threw not straight to the lineout after they got the scrum penalty. Australia wisely selected the lineout option 30 metres from their own line and a break by 12. Duncan Paia’aua took them down to the opposite corner of the field.

Penalties were swapped and the score of 3-10 with the quarter-time drinks break coming up didn’t look too bad but it was a false measure of what was happening.

For the Aussie parents in the crowd it was like watching their kiddies playing on the highway as trucks whizzed by. And there were collisions: all won by the men in green, regardless whether players were upright or on the ground, or whichever side had the ball. The young Boks were too big, too skilled, too early to the accidents and had too much of a convoy of big engines acting together.

There were some moments of Aussie respite such as the novelty of fullback Jonah Placid passing the ball brilliantly to winger Tyson Davis, and when Davis made a separate incursion soon afterwards. But when the Junior Boks kicked a penalty to the Aussie 22 their interplay was too good for their opponents to apply shoulders, and LHP Ox Nche scored an impressive team try.

The lads in gold had one of their best passages when they had a 5-metre attacking lineout from a penalty, but after being held up over the line their scrum by the goal posts was penalised and South Africa cleared.

There came a period when the Junior Boks had occasions when they could have kept on the scrum pressure to inflict a penalty try or at least a yellow card against the Aussies but the backs wanted the ball and it had to emerge.

Eventually a warning against LHP Cameron Orr was issued after an Aussie scrum inside their 22, but as though applying a mercy rule flyhalf Brandon Thomson kicked a penalty goal for South Africa.

After outstanding lock Jason Jenkins went on a long run he spoiled a certain try with a bad pass for the half to end. It was a rare error from the big man.

The half-time score was: South Africa 20–Australia 3, but the scoreline flattered the Aussie Under 20s.

Placid went on a long run and threw a second excellent pass, but as the Aussies looked likely to score, a falcon delivery to the head stopped the move. Then Nche smashed Aussie flyhalf Andrew Deegan in the Bok 22 with a crushing tackle and after Jenkins hoofed the ball downfield winger Kyanyo Ngcukana scored at the other end, just four minutes into the half.

The extras made the score 27-3 to the Boks and worse was to follow with an inevitable scrummaging yellow card to Orr at 50 minutes.

South Africa scored two tries against 14 men in the following ten minutes but, truth be told, they were weak defensive efforts. The impressive Thomson duped a tackler and ran in grassy channels to score—and Jenkins ran over the first tackler and there was nobody else to put an arm on him, let alone a shoulder.

After the restart 7. Michael Gunn made a rare Aussie dominant tackle to reclaim the ball and Paia’aua scored in a pile of bodies on the other side of the field.

The Boks blew a try with a forward pass but Australia tried to run the ball out and when they knocked-on South Africa scored from first phase with nice interplay. Winger Leolin Zas got the five-pointer as Aussie defenders got in each others’ way.

The leaders were cynical at the end and got two yellow cards, enabling Andrew Kellaway to score a consolation try for his team.

It was like South African men playing against Australian boys in the forwards, and I’m not just talking about the size, nor the strength, of the Junior Springboks.

Their rugby upbringing in forward play made them clearly superior, most notably in the scrum, but also at the breakdown. Their maul was not as scary as feared, nor was their lineout; nor were their reserve forwards as formidable as the starters were, but they should shake the England pack in the semi-final with their innate ferocity.

The Aussies had to play at their best to compete but they were over-powered and weren’t allowed to. South Africa scored six tries, mostly underwritten by strong pack play in the lead-up, but the final try-scoring movements of four of them owed more to soft gold defence than to hard green power.

The Aussies will struggle to maintain their fifth-place ranking from last year if they defend like that. 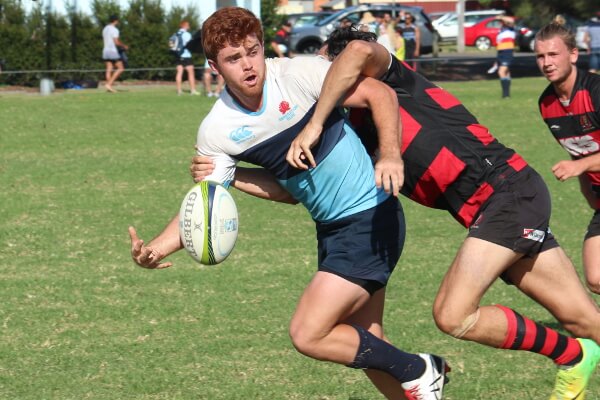 Andrew Kellaway – did not get enough ball

South Africa
It is not easy to apportion credit in such a dominant forward pack, which needs an eight-man contribution as a given, but big, fast lock Jason Jenkins and opensider Jacques Vermeulen, were outstanding examples of South African youngsters playing the positions.

Eighthman Hanro Liebenberg was hardly less impressive, and you have to give credit to LHP Ox Nche and THP Thomas “The Tank” du Toit for their scrummaging.

Australia
Likewise it is not easy to give plaudits to players who have to put out so many fires, but lock Ned Hanigan and opensider Michael Gunn can be proud of their shifts. Inside centre Duncan Paia’aua was the most threatening back, though the ball didn’t leave his hands as often as it might have.

Fullback Jonah Placid probably had a career high of passing twice to effect, after making good ground, and wingers Andrew Kellaway and Tyson Davis could scarcely have done better with their starvation diet of pill.

Tah Aid: The rugby community unites for a cause!
Preview: Waratahs vs Reds