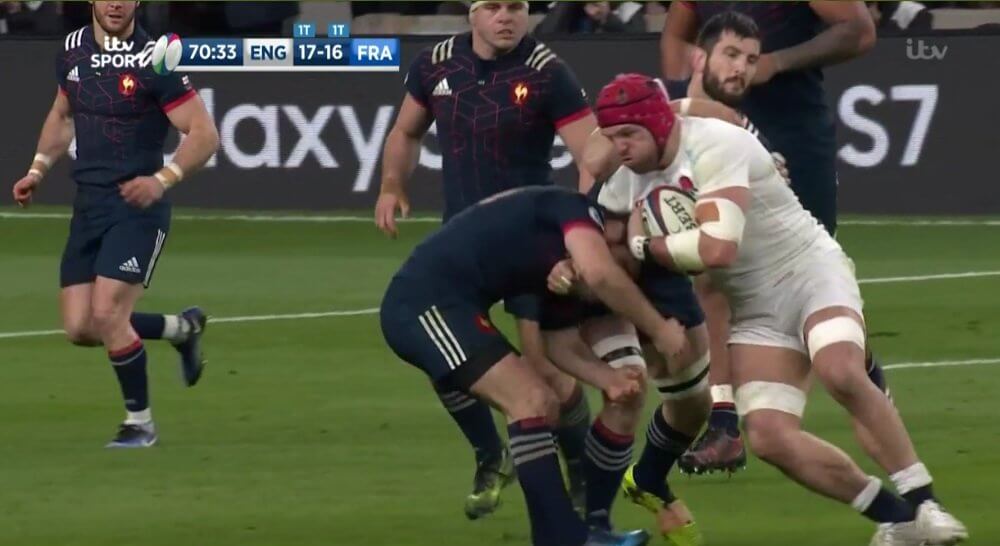 England were rusty and lucky to beat an enthusiastic and super sized France in Twickenham in Round 1 of the 2017 RNS 6 Nations. The monster French team created 10 line breaks to England’s 5 and their talismanic number eight, Louis Picamoles, was announced man of the match. A rare occurrence for the award to go to a player on the losing team playing away.

However, despite losing heavily almost every statistic and KPI, the Eddie Jones coached England team took their chance late in the second half with Ben Teo scoring to deny France. This England team is now the proud holder of the longest winning streak of any team wearing the red rose. Fortune is clearly smiling on this England team.

Both teams had limited opportunities in the opposition 22m area but the only 2 tries in the match were scored from Red Zone Shots. France were the first to score a try around the 60 minute mark with a sustained attack that eventually saw them cross the white wash. As the following clip will show England’s Dan Cole was slow to adjust and shut down the offload as the French forwards played through the line.

When England had their opportunity to respond it was the fresh substitute Ben Teo who scored the try after some heavy carrying from James Haskell and Nathan Hughes. As England launched this Red Zone Shot they changed multiple players injecting Danny Care, James Haskell and Ben Teo. It proved perfect timing from the coach and it’s fair to say the England bench stepped up and delivered.

The French were the more fluent of the 2 teams in attack and they focused on attacking England on the blind side on multiple occasions with good success. This clip is probably the best of their blind side raids. It’s a 5 Man lineout and France attack George Ford from the launch phase and they get plenty of go forward. Picamoles then ran a hard line directly off the scrum half and his carry created super quick ruck ball for the French to launch their blind side raid. As the clips shows they created a well worked scoring opportunity on the right edge.

England struggled from the launch phase of many of their attacking opportunities due to French pressure in the set piece and the ruck. However, they made a very good adjustment just after half time using tempo at the lineout to launch one of their best attacking efforts. As the clip shows England employ a “Hurry Up” tactic to dilute aerial pressure at the lineout and provide clean ball for the backs.

The French changed things up with their Exits but the following clip is an illustration of a tactic that we may see more of in this Championship. The French saw England’s fullback Mike Brown as a threat on kick return so in order to deny him space to launch a counter attack they bombed him. As the clip shows it’s easier to shut down a counter attacking threat if the target get man and ball at the same time.

England’s exits continue to look like the 2007 Springboks with Ben Youngs hoisting box kicks for Jonathan Joseph to chase and contest the kicks. As the clips show France kick to England’s winger so that he is not able to chase the box kick but England were prepared for this so Joseph was given the task of kick chase and he was outstanding.

It would be remiss of me not to mention the Twickenham debut of the young Australian referee, Angus Gardiner. The television commentary team made much of his performance, questioning a number of his scrum and ruck decisions. At one point they even questioned the political correctness of his language.

(^ make sure the volume on the video is turned up!)

All that being said I recently caught up with Alain Rolland the boss of World Rugby Referees. We played international rugby together many years ago now but we’ve stayed in touch and he’s a good friend. When I quizzed him on Angus Gardiner he was very supportive of the young Aussie referee. So let’s hope he learns quickly and kicks on. International rugby can be an unforgiving arena for players, coaches and match officials.