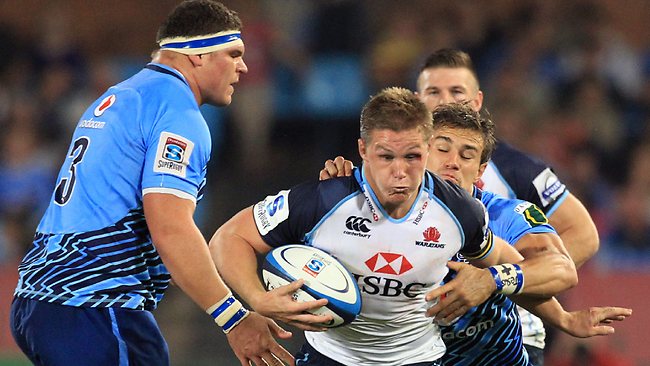 The Waratahs went down to the Bulls at Loftus 30-19, blowing a golden opportunity to break their drought in the Republic.

I thought the game was of high quality, mixing typical Saffa physicality with Waratah panache. The first half was largely dominated by the Bulls, who had clear physical ascendancy and used it in both attack and defence. The Waratah line was unbroken through the half, but ill-discipline proved costly, with a number of silly penalties being converted by superboot Morne Steyn. The Tahs were looking scratchy and made a number of uncharacteristic errors- kicks out on the full, passes behind men, knock-ons. Bernard Foley had an off night, and as a result the Tahs struggled for momentum.

Down 0-9 after 30 they were in danger of the game getting away from them. A piece of Israel Folau magic changed that, as he single-handedly created a try from just outside the Bulls 22. Brendan McKibbin had a shocker with the boot (a cardinal sin at Loftus) and couldn’t land the conversion. Another Morne Steyn penalty after the siren had the teams heading to the sheds with the scoreline at 12-5 to the Bulls.

The second half started in the best possible fashion for the visitors, with a lovely soft Foley pass putting Michael Hooper in a hole just inside the Bulls half. He then popped a lovely ball in contact to Paddy Ryan who strolled over, with McKibbin adding the extras to level the scores at 12-12. Yet another Steyn penalty put the Bulls back in front, as the game began to open up. Both sides had good chances to get on the scoresheet, but it was that man Folau who set up the Tahs’ third try after pouncing on a Bulls error and running 50 metres before offloading to Wycliff Palu. Palu then took in two defenders before offloading a pearler of a pass to McKibbin, who held the ball up beautifully before finding Foley running wide. McKibbin converted and the Waratahs were up 19-16 and were in front for the first time in the match.

But this scoreboard dominance would not last long. Yet another Foley knock-on proved costly, with the Bulls rumbling into the Waratahs 22 and scoring from close range through Francois Hougaard. At 19-25 down the Tahs still had plenty of chances to find the clincher, but just couldn’t break the Bulls defence. To make matters worse Morne Steyn scored after the hooter to deprive them of a losing bonus point, and end the match at 30-19 to the Bulls.

Despite leading in the last quarter of the game, the Tahs never looked like they were on top of the Bulls. They had plenty of possession, but struggled to get go-forward ball. The lineout was a shambles, losing seven of their own throw and failing to pinch one off the Bulls. The scrum was the exact opposite, with the Tahs being totally dominant.

All in all it was a bittersweet result for the Tahs. Yet another loss in which they scored three tries. Plenty of positives, but you feel like that physical element will need to improve if they want to compete with the bigger sides in the competition.

The Tahs had just scored their third try, and were in front for the first time. They had the ball just outside their 22, and it was passed back to Bernard Foley. Under no pressure Foley spilled the ball, and this gave the Bulls a scrum deep in the Tah 22. They scored from the scrum, and the Tahs nver got back in it.

For the Bulls I was impressed with the work of Juandre Kruger and Arno Botha. For the Waratahs it would have to be Israel Folau, who scored one try and set up another. He also pulled off a try-saving steal late in the game.

Folau answered Mogg’s challenge and is further staking his claim for Lions selection. Benn Robinson was dominant in the scrum, and I also thought Rob Horne had a good game in midfield.

Review: Brumbies Back On Top, Force back to the Drawing board
Review: Crusaders v. Rebels – A gutsy loss…is still a loss.