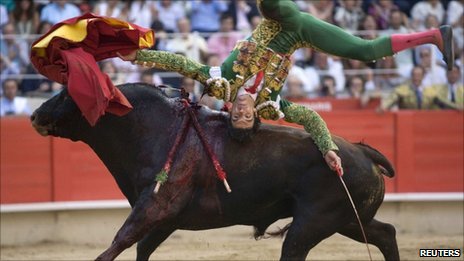 The home side was the better team for much of the game, however will rue a couple of costly late errors that opened the door for the Bulls. Poor goal-line defence was also evident, with the Bulls scoring three tries from their only three attacking opportunities.

The Bulls pre-game drink of choice

It was Heritage Night at Allianz Stadium, with the Tahs looking resplendent in dark blue, a tribute to the 1937 team that beat the Springboks. It was a classy affair. Obviously no-one told the Bulls about the dress code, and they ran out in a jersey that looked as though they had thrown up on themselves after each downing four litres of strawberry milk.

The Tahs were on their game from the get go, and held the ball continuously for the first seven minutes. However they achieved no points from this, despite being camped on the Bulls line for a large portion of it and turning down a shot from next to the posts. The Bulls were the first to register on the scoreboard, with Morne Steyn potting a penalty to lead 3-0 after 9. However the Tahs soon hit back with Berrick chalking up a penalty of his own from right in front. The Tahs continued to hold posessions, and then scored a superb try in the 16th minute from a backline set-piece. Barnes took the ball to the line, with AAC, Kingston and Horne all running good lines. Barnes took the right option, threw a cut-out to Horne and he ran 40m to go under the sticks. Barnes  added the extras and the Tahs were up 10-3.

The Tahs suffered a setback soonafter, with Dean Mumm sent to the sin bin for a dangerous tackle on a Bulls lineout lifter. The Bulls chose to attack from the penalty, and were rewarded with a try to Francois Hougaard after some soft ruck defence from Benn Robinson. Steyn converted and we were back level at 10-10. The locals held the ball well though, and Barnes edged them back ahead with a 40m penalty.  The game was tight for the remaining 5 minutes and they went to the sheds with the Tahs up 13-10.

The second half started with yet more Tahs possession, and Berrick slotted another penalty to take the lead to 6. The game then reduced to something of a slogfest, with both sides trading blows in close. The Bulls gradually got the upper hand though, and scored a good try to Ndungane after a prolonged period pressuring the Tahs line.  The Tahs rang the changes, and they paid off immediately with a great try to Afa Pakalani after a good passage of play directed by Barnes and McKibben. BB couldn’t convert and the match entered the final 15 minutes with the Tahs leading 21-17. That became 21-20 just a few minutes later after Lopeti Tomani was penalised right in front of the posts. The Tahs hit back almost immediately after the Bulls bungled the ensuing kick-off. McKibben slotted a penalty to get the margin back out to 4 with 9 minutes left.

The Bulls then kicked into gear, thanks to a couple of very costly errors from Lopeti Timani. After a prolonged period of pressure big man Werner Kruger got across the stripe, with Steyn adding the extras to take it to 27-24 for the visitiors. That’s the way it would finish, with another heartbreaking defeat for the Tahs.

For the home side it was a commanding performance from Berrick Barnes, by far his best this season. He sent a strong message to the Wallaby selectors that he is up to the job, throwing the last pass for both Waratah tries. He directed his centres well, and used the boot sparingly and largely effectively. Afa Pakalani had an eye-catching game out wide with a couple of strong runs.

He was complemented by the performance of the pack, who ended tonight roughly even with their opposition. Tonight was all about the unsung heroes, the sloggers. John Ulugia played the whole 80 and was probably the standout Waratah forward. Kane Douglas also had a good game. Not to mention Rocky Elsom who looks to be getting back to his former self. Brickbats go to both Lopeti Timani and Dean Mumm, who gave away costly penalties at crucial points of the game.

For the visitors Francois Hougaard had a cracker, and he was ably supported by the ever-reliable Morne and their mobile back-row.

So in the end the Tahs just couldn’t close it out. If you want to play finals footy you need to turn 70th minute leads into wins, and yet again they have been unable to do it. So you would think it’s thank you linesmen, thank you ball boys for 2012. Let’s just hope they can knock off the Queenslanders at Suncorp in July.