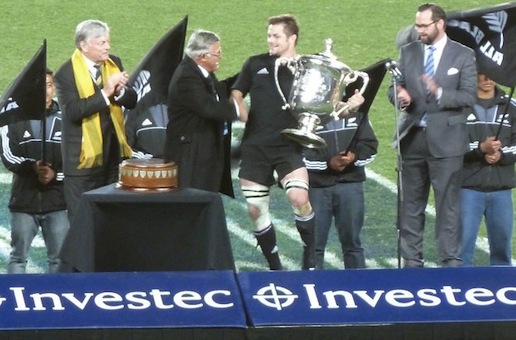 Australia have travelled to New Zealand for their second game of The Rugby Championship. They walk into one of the toughest arenas in world sport. New Zealand’s record at Eden Park is an amazing tribute to the power of a crowd’s support and a team’s belief in it.

The Wallabies have six changes to the team that look lost in Sydney last week. Only time will tell if the changes will improve or damage the team’s chances of breaking their 28-year losing streak.

New Zealand start the game but the first five minutes are very scrappy. The Australians look more dangerous and focussed in the forwards and the New Zealanders just look dangerous everywhere. But the Kiwis manage to get a little field position and possession and immediately look dangerous missing a penalty kick and only just failing to score by inches in the left corner of the field. It feels like Australia are just holding on even though they are dominating possession.

Despite only having 25 per cent possession New Zealand have their second chance to score this time getting over the line only to see Timani rip the ball away. New Zealand look likely to score at any moment.

New Zealand start to get the ball in the hands a little more. The tempo of the game, already fast, suddenly shifts up a gear. They are running the ball from everywhere and eventually Rob Horne gives a penalty away and Dan Carter kicks it through the posts. After 25 minutes of great play from both teams New Zealand lead 3-0.

Coming up to 30 minutes New Zealand are again attacking in broken play. Genia tackles Corey Jane in a desperate tackle and then foolishly plays at the quick pass back. Owens has no option but to penalise and yellow card Genia leaving Australia one short and with Barnes at halfback for the last 10 minutes of the first half. Carter kicks the penalty easily. 6-0 New Zealand.

Australia are kicking way too much possession in attacking positions. To make matters worse they are mostly kicking to the form fullback in world rugby right now. Israel Dagg is lapping it up and making metres seemingly at will. Drew Mitchell goes down with another leg injury and has to leave the field at about the 35-minute mark. He must be the unluckiest player in world rugby.

Without Genia, New Zealand camp in the Australian half and eventually the Wallabies are caught offside in front of the posts. Reliably Carter punches the ball through the posts to increase the lead to 9-0.

The first half ends with New Zealand back on attack and Australia defending again. The Australians have lost their attacking mojo from the first 15 minutes and are grimly holding on for dear life. New Zealand are New Zealand. Fast and dangerous. Doing the little things perfectly and the extraordinary constantly.

Anthony Faingaa starts the second half for Rob Horne. New Zealand are unchanged. Stephen Moore is pinged for offside from a 22 dropkick and another three points are given up by Australia. 12-0 after two minutes of the second half.

James Slipper replaces Benn Robinson at the same time. An odd time for a replacement.

New Zealand have picked up the pace. From the kick-off they drive the ball into the Australian half and after more than a bit of Sonny Bill Williams magic Smith passes to Dagg at pace and in a hole five metres out and the try is just a formality. After the easy conversion New Zealand lead 19-0 and Australia’s chances in this match slip a little further. Yet another offside penalty a couple of minutes later leaves Australia trailing by 22 points.

Australia get a little possession in New Zealand’s 22 but a series of errors sees them never threaten the line. Eventually New Zealand work their way out of danger and despite being awarded two kickable penalties the Australians walk away with no points from an extended period in the opposition’s half.

To their credit the Australians rally in the final quarter. But it’s boys against men. New Zealand are the better coached team, the better skilled team; everything Australia tries they are ready for and have the right answer to.

Australia have to fight for every shred of possession. New Zealand seem to be able to win the ball at will. But despite this the Australians are holding on and not letting them score. Not helping their plight is the insistence on kicking the ball away at every opportunity. No one seems willing to take on the man and instead want to put the chip kick through. Every kick is going straight into the arms of New Zealand’s back three.

And it’s over. New Zealand wins 22-0. Australia were out-thought, out-played, out-muscled, out-defended. No one can question Australia’s commitment but they just didn’t have the ability to stay with them.

Where do they go from here? Who knows. They will need to work on keeping the ball. Both in tight and in general play. You can’t give the ball away constantly and expect to win games.

Siteleki Tamani was one of the Wallabies’ best this week and finally showed us why he’s been picked. If he can keep that level up we’ve found a long-term second rower. To pick a player out of the New Zealand team would do a disservice to the rest of the team. It would be easy to say they won the contest in every position tonight.