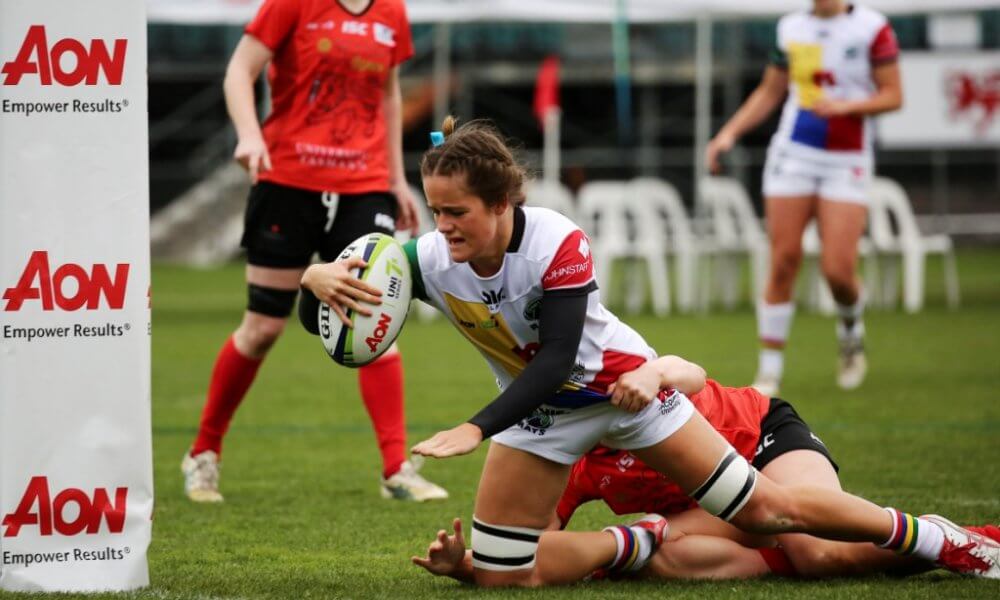 The second round of the AON Uni 7s kicks off this weekend in Sydney as Macquarie University take their turn as hosts. After a highly successful inaugral tournament in Tasmania a couple of weeks ago, this is a perfect opportunity for Sydney-based rugby fans to experience high quality sevens rugby. Call it a pre-cursor to the Sydney International 7s next year.  To cap it off, the Sydney Rays will be making their 2017 NRC debut at the same ground at 3pm on Sunday arvo when they host the surprise packets of the first round, the Greater Sydney Rams.

While there was some uncertainty around the standard of rugby that would eventuate in the first round, those doubts were quickly doused as each of the University teams proved worthy combatants in a national competition. Further it showed that our Womens Rugby 7s depth is a in a very healthy state which can only make the current squad members hungrier to perform.

The University of Queensland, coached by Reg Tayler and with a squad boasting Aussie reps Emilee Cherry and Emma Sykes, proved too strong in Round One defeating a Charlotte Caslick inspired Bond University in the final to claim the first tournament of the season. Expect them to be just as strong this weekend however with a sprinkling of returning Aussie players, there’s a good chance of a different outcome this round. Regardless the quality should remain high and well worth the watch

And watch you can as all matches will be live streamed on Rugby.com.au.

Let’s look at this teams for this round:

MACQUARIE UNIVERSITY (3rd in Round 1) 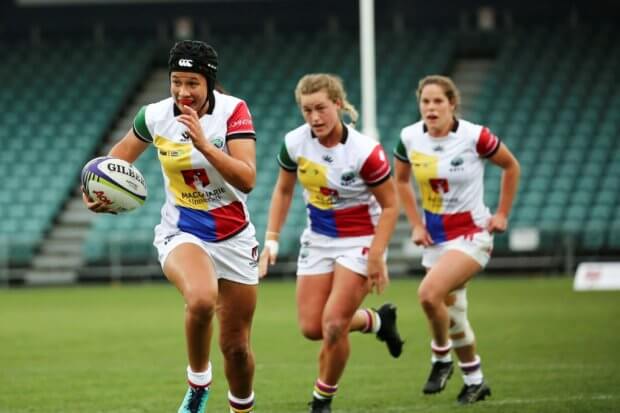 Chloe Dalton was actually one of the stars of the Tasmanian tournament but more from her off-field work. The injured Dalton was one of the commentators over the two days and proved a highly entertaining character and informed contributor. It will be on the field she’ll be looking to contribute this weekend however as she returns to the field to boost the home team after their third place finish in Round One. Expect Dalton to have a similar impact to the side that Cherry had with UQ, Vani Pelite had with Adelaide and Alica Quirk had with New England.

11:00am v University of Adelaide

UNIVERSITY OF TASMANIA (8th in Round 1) 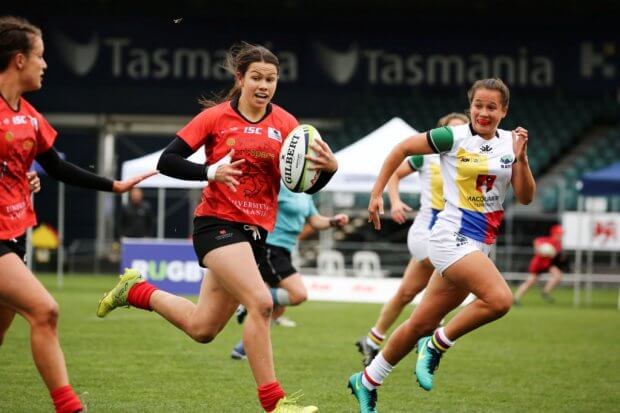 Lauren Murty was one of the unknown players that really grabbed the eye in the first round. Now I am sure she is known by those who need to know, who are part of the development system, but to the general punter she was an exciting newby. And boy she was great to watch.  With an OzTag background her playmaking skills are honed as well as her ability to spot a gap and gas it. She is, to be fair, somewhat short of stature but it never was an issue in defence as she revelled in bringing down her larger opposition.

UNIVERSITY OF CANBERRA (6th in Round 1) 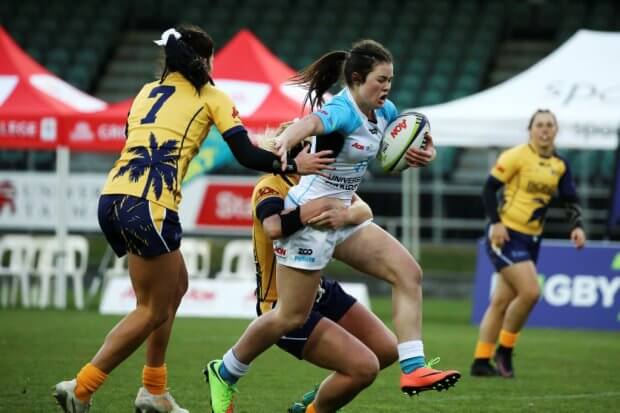 After some preliminary investigation it’s apparent that the background of some of these players is remarkable and proof that a competition such as this is vital to find and develop our future national stars.  Sarah Carter has had a many and varied sporting history having already been selected to represent the ACT Women’s Rugby team this year as well as the Canberra Raiders women’s league team. Throw in her OzTag experience and her tireless performances in Round 1 are a little more understandable.

BOND UNIVERSITY (2nd in Round 1) 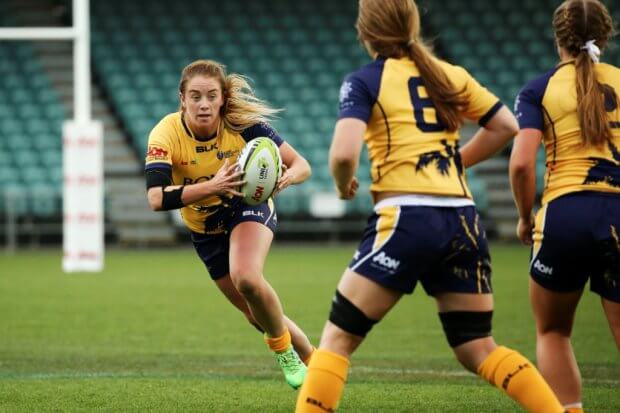 Bond Uni coach, English 7s legend Ben Gollings, has ensured that his talented rugby squad has plenty of experience mixed in. Charlotte Caslick is obviously the super star but it is Irish international Stacey Flood who captains the side.  Flood, who hails from Dublin, is one tough cookie and proved to be one of the best technical tacklers in Round One a fortnight ago.  As for someone who grew up playing soccer and Gaelic football, Webb’s pretty handy on her feet and with the ball as well.

10:40am v University of Canberra

UNIVERSITY OF ADELAIDE (7th in Round 1) 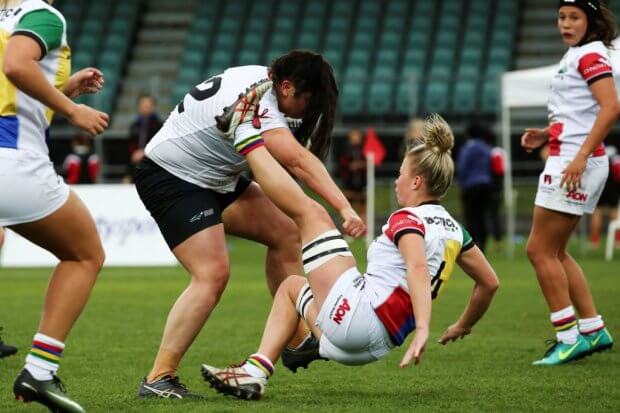 We’ve come to expect our Women’s 7s to be played a certain way in Australia. With a squad filled with speed and skill, our team plays with fantastic width and pace.  Sure we have power in the team through the likes of Elia Green, Shannon Parry and Sharni Williams. But none are really the run over the top of you type of player. Well Eva Karpani is that type of player. The South Australian local has been part of the Australian rugby system for a few years, in both the 15s and 7s programs, but this was my first sighting of her and she is awesome to watch. Of solid build she has surprising speed which means, when combined, she is one of the hardest to tackle players in the competition.

UNIVERSITY OF QUEENSLAND (1st in Round 1) 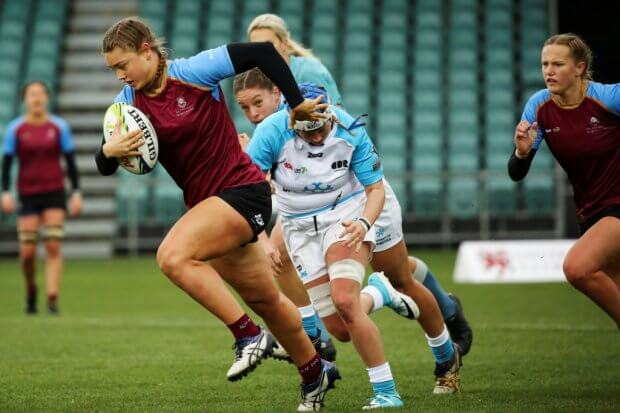 17 year old Lily Dick has had a busy couple of years.  In 2016 she was part of the all-dominating Queensland 7s team as they won the National Women’s Sevens title in Adelaide before backing up to captain the Youth Girls Queensland side in the National Youth titles in Perth. She has already caught the eye of Australian coach Tim Walsh and was part of the Gold Medal winning Australian side at this year’s Commonwealth Youth  Games. All that is part of her expected development but the chance to play alongside Emilee Cherry in this competition could be the finishing school she requires to reach the top.

10:00am v University of New England

GRIFFITH UNIVERSITY (4th in Round 1) 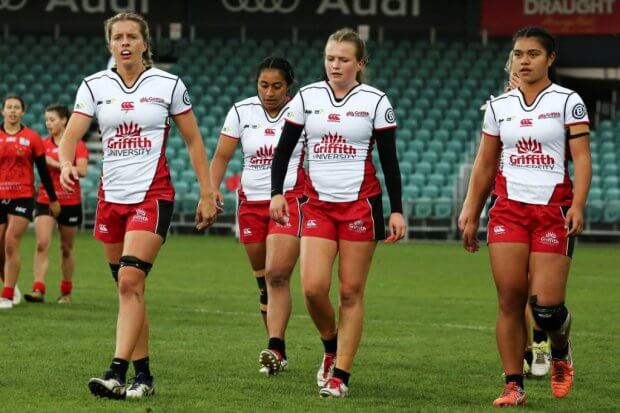 Ok, let’s get it out of the way. Yes Alysia Lefau-Fakaosilea is related to Lolo of the Brumbies – he’s her cousin. But the pedigree doesn’t stop there. She also has test player uncles in Wallaby Will Skelton and All Black Mils Muliaina. But Alysia is quickly making a name for herself and was a standout performer for Griffith Uni a fortnight ago.  Alysia has been part of the highly productive Queensland talent indemnification system for a little while and it was easy to say why in Tasmania. Lefau-Fakaosilea is a high impact player with a wonderful workrate which is just the type of player that Tim Walsh likes in his national squad.

10:20am v University of Tasmania

UNIVERSITY OF NEW ENGLAND (5th in Round 1) 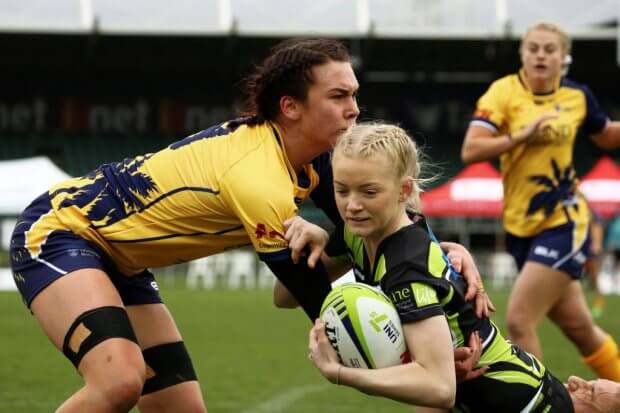 It’s fair to say that Hannah Southwell has some sporting ability. She set a record for being the youngest ever goalkeeper in the W-League (soccer) when she played for the Newcastle Jets as a 15-year old. Add to that her state caps in Junior cricket and clearly rugby has snared a prodigious talent.  With limited international experience on the World Series, this tournament is exactly the type of opportunity Southwell needs to showcase her game at a new level.

10:00am v University of Queensland

It’s tough to go past University of Queensland again or their grand final opponent, Bond University. But I’m going to go out on a limb and say the home team Macquarie University, with the addition of Chloe Dalton, will take out the title. 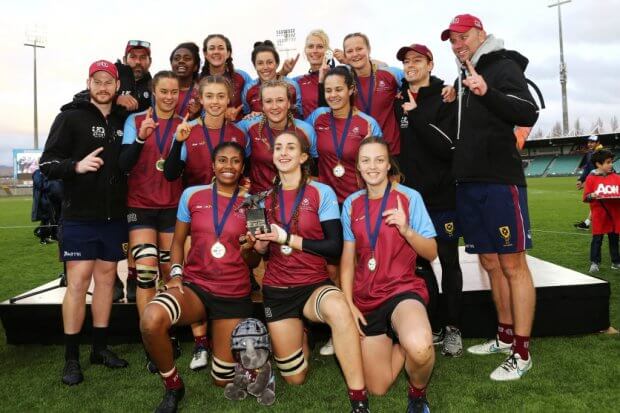