Anatomy of a Try: Andy Muirhead vs Melbourne Rebels

Anatomy of a Try: Andy Muirhead vs Melbourne Rebels

There is something about the set play and Australian Rugby, it’s in the DNA. Personally I’m a big big fan of strike moves and in both the Australian games yesterday we saw two fantastic tries attacking the transition zone.

The Brumbies exploited the space at the tail of the lineout for Muirhead’s try and the Waratahs sent Maddock over for a cracker right through the gaping chasm left by the Reds.

That space is going to close up pretty quickly now it’s been exploited so openly but there was enough in both those tries to flag up there is plenty of detailed analysis going on, making these set plays hard to stop even when you know they are coming.

Let’s have a look at Muirhead’s try, because despite the ridiculous ease in which it seemed to be scored, there is actually some cracking small-details work by the Brumbies that has a big part to play in stopping the Rebels shutting down something which should have been very stoppable.

Lets first of all look at how the Rebels are defending here.

We’ve got Korobite defending at 2, makes sense as a big powerful hitter defending the narrow side.

We’ve got Uelese defending in the halfback position. This is the norm, his job is going to be close off the attack around the tail of the line out and defend the punch through the middle of the line should the Brumbies pull a Red Sea and part it. 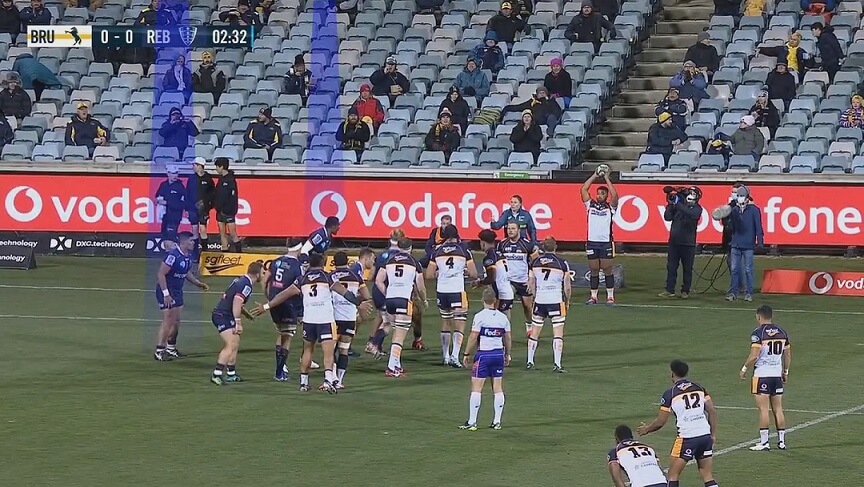 Sitting in behind both of them in the 11 position is Louwrens, and he is key and who the Brumbies actually exploit to create the try (stick with me this will make sense).

Then in defending at 10 we have Hardwick with Toomua defending in the 12 channel.

The Brumbies set is simple.

Swain and Douglas are both in the middle, so we know short of a front pop ball there are really likely only two areas of contest in this lineout – the middle where they are both located and the tail with Samu. Cusacks not a jumping option on this occasion as he’s in the half back position. 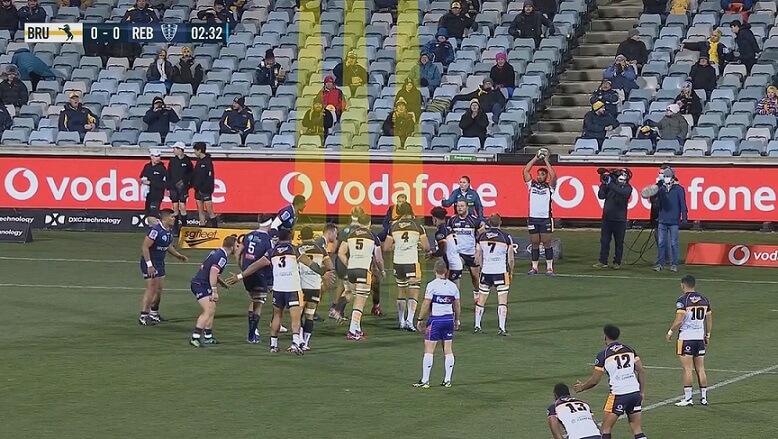 It’s all simple stuff set up wise, but it is already causing the Rebels to think about what’s happening. If it goes to Swain or Douglas then it’s likely to be a drive or a classic Brumbies fake and go.

If it’s Samu it’s probably going to be a pop down to Cusack coming around at pace.

Both are typical Brumbies moves we’ve seen many times.

They go to Douglas and it’s the catch and set which the Rebels have to defend pulling in the entire lineout.

Cusack lays the ball off to Fainga’a who comes around to attack the tail where Uelese is waiting. At the same time Alaalatoa initiates the spin of the maul to take all the Rebels forwards away from the gap. 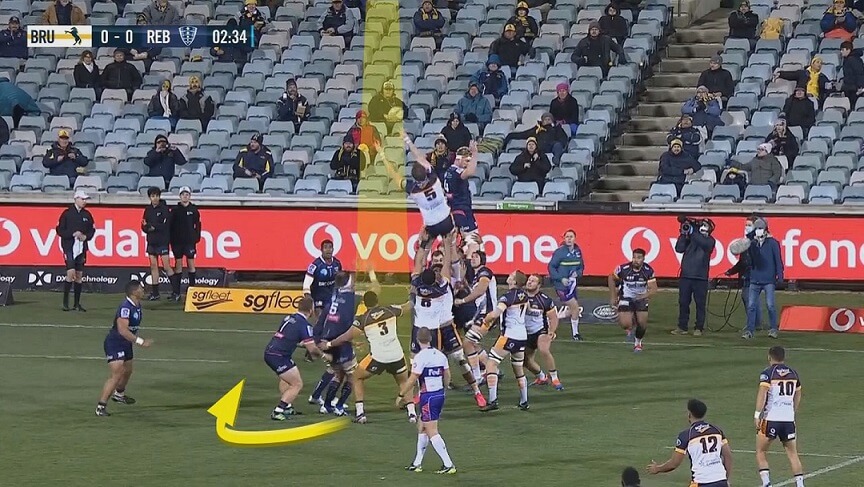 Uelese bites and Muirhead takes the inside ball to hare over.

But let’s look at the details around this move.

The Attentions in the detail.

The first thing to note is Muirhead is only one of many options.

The Bumbies have set their midfield up very tight, I’d question if they were actually 10 here but regardless as Fainga’a comes around we see that Kuridrani is also an option and a good one that he can use and Lolesio starts to drift out as a back door option.

Watch as how Fainga’a first comes around he’s looking at Kuridrani, it’s an option and a good one, but with Hardwick and Uelese patrolling that seam it’s likely he see’s they have Kuridrani marked and opts to change to the inside pass (hence he’s not quite square enough to pass it comfortably). 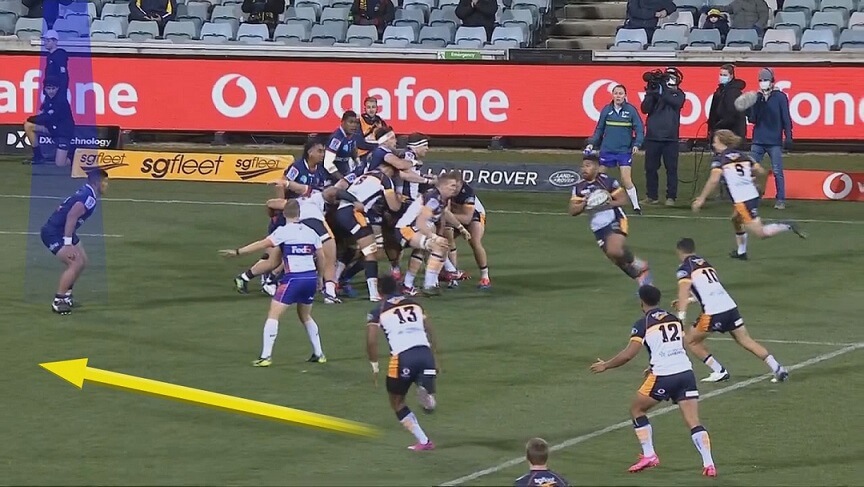 This takes Hardwick out of the game, he has to hold his move for Kuridrani and to assist Uelese. Toomua obviously is going to watch for the slider option.

That’s creating the space for Muirhead to punch through.

But let’s roll our thoughts back to Louwrens and question where did he go in all this? He was in the 11 position and in a perfect position to smash Muirhead.

Well, this is where Powell comes into play. 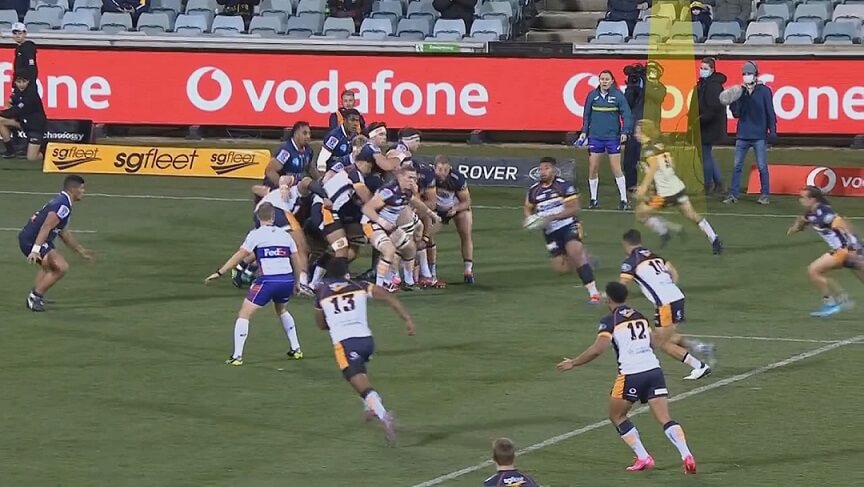 If we watch the far side as the ball is peeled we see Powell come flying around, it’s enough to make Korobite bite and it’s enough to pull Louwrens over initially before he realises what’s happened. 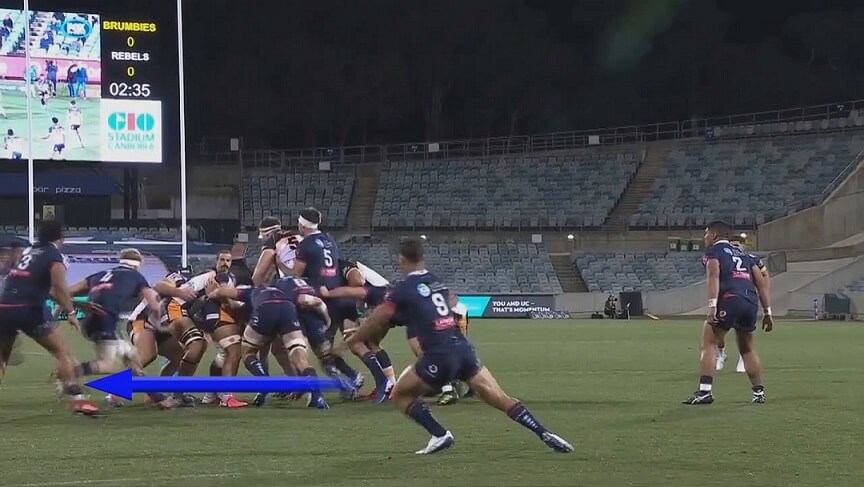 If Powells run doesn’t look overly convincing seeing as the ball was already with Fainga’a, then just remember we’ve got all the luxury of a reverse elevated position.

At ground level all these guys are seeing is Powell come around the short side at pace whilst Fainga’a is hidden by the set piece, ball or not that’s enough movement to interest them and that is enough to create the opportunity to exploit.

It’s easy to blame the Rebels defence here, call it poor but when you have a defender flooded with options as Hardwick and Uelese and Louwrens are here it’s going to cause indecision which is what the Brumbies exploit.

Bad defence, great attack, whichever way you sit this was a nice try to start the game with and a great score for Muirhead, it’s almost enough to forgive the hair do (almost).

Whoever said a change is as good as a rest clearly never played Super Rugby.

It’s easy looking at the Super Rugby Aotearoa games, to get caught up in their “This is how Rugby should be played!” brilliance and wonder, if everyone else is being left behind.

There is a fear that because teams are not playing the regular wider competition, they’ll not keep pace with each other but from a different perspective maybe the enforced separation is a good thing?

It’s giving everyone a chance to reset in their respective groupings, figure out what they are good at, at what they’re not and how they feel the game should be played and build accordingly. After all isn’t the beauty of Union the fact there are so many ways to play the game and they all have their day?

As a first weekend out saw rejuvenated teams, with fresh players and there were two great games, after such a period out it’s as much as you can ask. Yeah both games were error strewn but this enforced isolation is, for the Australian teams, a great chance to bring through young kids in a tough inter-state scenario without getting taken to task by the New Zealanders, battered into mush by the South Africans all whilst dealing with the physical battering travelling to New Zealand and South Africa.

I think we’ll see some really interesting development from the Australian teams, some exciting new players coming through and some new ways of attacking and innovating the attack.

This is, unless you’re the Brumbies then it’s simply business as usual. Lord Lauries tank busters are going to steamroller you upfront before you’ve even caught your breath.